Fowling, it Rhymes with Bowling

An up and coming sport is taking over the metro Detroit area and beyond. It combines the time-tested game of bowling with the nation’s favorite game, football. Throw in a dash of lawn games and you have fowling. 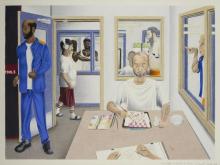 The Prison Creative Arts Project works to humanize inmates and tell their stories through an annual exhibition of artwork by Michigan prisoners.

Hendrix Experience at the Fox Theatre in Detroit, March 23, 2019. Photos by Joshua Tufts

Church of Scientology Returns to Detroit

In mid-October of last year, the Church of Scientology officially opened its doors at Jefferson Avenue and Griswold as a crowd of more than 2,000 people celebrated. The religion, founded in 1953 by former science-fiction writer L.

Boxing for the Future

“Glass: A Survey of Form and Function,” an exhibit at the Berkowitz Gallery in the Mardigian Library at the University of Michigan-Dearborn, is a charming display that features 56 popular artists that have influenced glass art in many positive ways.

From March 1 - 3, the 24th annual Motor City Tattoo Expo took over the Renaissance Center in Detroit.

Olivia Grantham Interview with Nancy Owen Nelson, author of My Heart Has No Colors