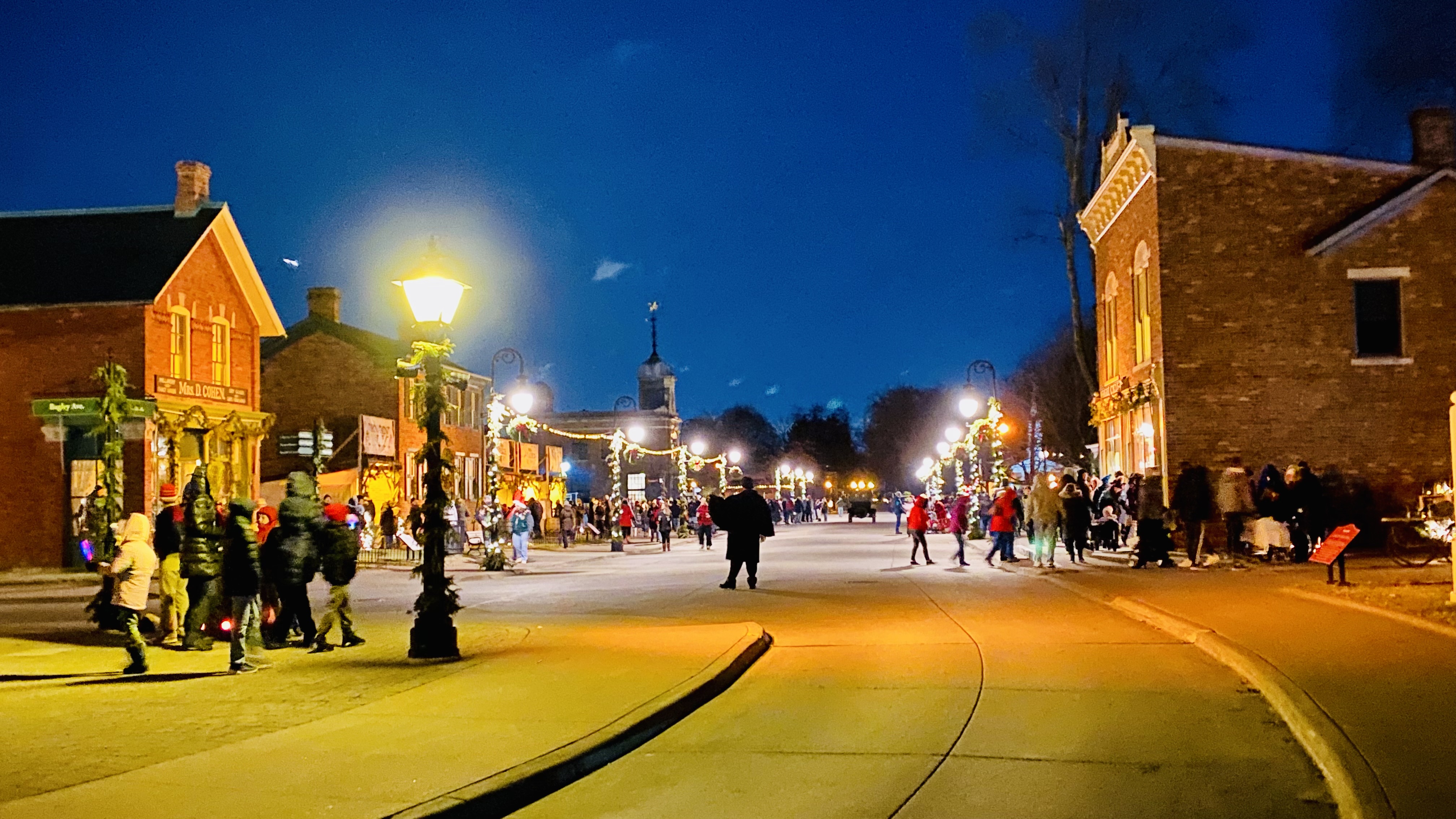 Holiday Nights has sold out at Greenfield Village. The annual event takes place throughout December.

Greenfield Village has a long lineage of holiday programming, dating back to the 1950s and 1960s. Early on, holiday festivities were more of a daytime experience, with an evening dining experience being added along the way, as well as other experiences such as carriage rides and stopping at some of the historic houses.

One noteworthy restaurant at the Village is the Clinton Inn, which is now known as the Eagle Tavern. The Village experimented with programming, hoping to have some people buy tickets to come in for the evening, which was a success.

Jim Johnson, the director of Greenfield Village, stated, “The expectations were just blown away as far as the the demand, and then we went back to the drawing board. So we proposed some things, brought those back, worked with our marketing department, our programming department, and went all out as far as adding entertainment, adding fireworks, adding all kinds of stuff. And that was in the early 2000s. And we’ve been sort of on really a growth pattern ever since.”

According to Johnson, during 2019, the Village saw over 100,000 people attending Holiday Nights, which translated to sometimes 6,500 people a night, which was too much for the Village to handle. As a result, the capacity has since been adjusted to make the event less crammed. This year, the event sold out within ten days.

Johnson explains, “You know it’s all about the experience, as you go places, what you get to eat, what you get to buy, maybe to take away with you, and then what you get to see and do. Those are the things that we always keep in mind, and we want people to be able to enjoy themselves and have access to things. We actually saw that our per caps, which is what people spend per head – the average – goes up when they can access things. When it was so busy, people had to stand in line forever to get a donut.”

When the COVID-19 pandemic hit, it drastically affected the attendance of all sorts of programming at the Village. “The pandemic did a lot of damage to what we’re able to do,” said Johnson. In 2020, the Village held a restricted version of Holiday Nights, in which visitors did not enter the buildings. Many of the activities were still carried out, and people were still given an experience to remember. “But still people were thrilled to be out. We kept capacity very low. We got a good response for that,” said Johnson.

Each year, the Village switches up the attractions for Holiday Nights, including music, shows, and decorations. “We tweak everything every year. So people recognize the familiar things they enjoy coming to see. The core of the experience remains pretty steady. And we’re working with more partners. People that specialize in certain time periods or different things they do, and we’re bringing them in for not maybe every night, but some of the nights as a kind of a surprising delight for that particular night,” said Johnson.

Lately, the demand for Holiday Nights has been overwhelming, according to Johnson, and there hasn’t been much room for growth since there aren’t any more days in December for the event to take place. However, there are some new areas that have been opened up, such as the central market.

Johnson said, “We will be adding, for the first time this year – we had it for a Halloween program – but, the central market was this enormous new building that was added to the Greenfield Village this year. We’ve had it in pieces here for over twenty years, and we finally managed to get the funding together just as the pandemic hit. But we were already funded, so we actually built it during the pandemic years. So it’s an open pavilion not great for December, but we’ve made some accommodations that maybe will work for us, and that’s going to allow a little bit more capacity. And then in 2014, maybe the end of 2013, we were looking to open a brand new restaurant, which is just across the street from the new central market, which also can help with capacity.”

During Holiday Nights, many of the iconic locations across the 80 acres of Greenfield Village are converted to look like a picture-book Christmas town. The Village has many actors dressed up in historical attire as well as festive attire. Carolers, musicians and bands are scattered across the Village providing musical entertainment for visitors.

One of the most crowded attractions you will first notice when entering the Village is Main Street, which is filled with many shops, bonfires, and historical attractions. One of the most notable of these attractions is the Wright Family Home. Inside the home were many Christmas decorations, including a heavily-decorated Christmas tree with presents underneath and a star on top. Something unique, however, can be spotted hanging from the front of the tree, which is a large baby doll that seems to be crying. It’s unusual to see this on any ordinary Christmas tree. Thanks to modern technology, the Library of Congress contained an enhanced version of a historical image of the Wright Brothers’ Christmas tree. In the photo, a small crying baby doll can be seen on the tree, which seems to be some sort of inside joke between the Wright brothers. The village was able to use this image to recreate the tree to look like the way the Wright family would have seen it.

As you traverse the Village there are many other key attractions to be seen, as well as horse-drawn carriages and several Ford Model T cars that visitors can ride. A giant Christmas tree, as well as a chapel, named the Martha-Mary Chapel, and a school, named the Scotch Settlement School, can be seen in the distance from the intersection of Main Street.

A walk from Main Street in the direction of the large Christmas tree at the village square will take you to a neighborhood filled with homes. Some of the homes are open for visitation and contain entertainment such as musicians. People walking by looked up to see Santa Claus standing on top of one of the homes sending holiday greetings in a jolly tone.

Holiday Nights will continue until Dec. 28. While tickets are sold out, next year, plan to purchase tickets as soon as possible. For information on Holiday Nights and future attractions at the Greenfield Village, visit: thehenryford.org.