"I Can't Breathe": A Call to Action 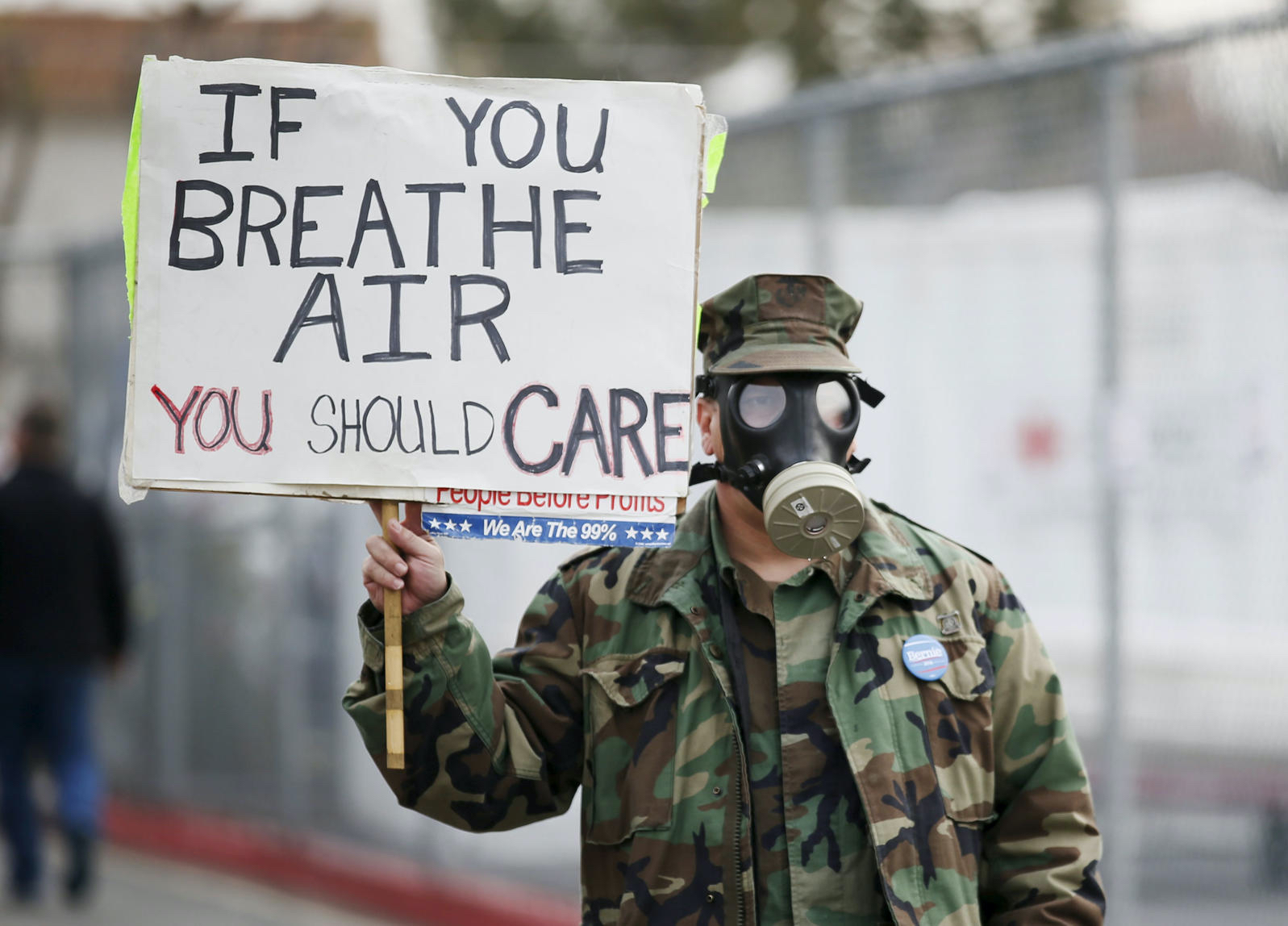 Caption: Methane has been leaking from the Aliso Canyon natural gas storage facility in Los Angeles since October 2015, leading to reported health issues for local residents, serious concerns about climate impacts, and protests by members of the public. Photo courtesy AP.

In June, vice president of environmental injustice at the National Wildlife Federation, Mustafa Santiago Ali, told the House Energy and Commerce Committee, “When we say, ‘I can’t breathe’, we literally can’t breathe.”

Climate change is caused by global warming which is caused by greenhouse effects. The atmosphere preserves some of the sun’s heat, allowing the Earth to be a habitable place. Without greenhouse effects, the Earth’s average temperature would be -18 C. The problem, however, is not the natural greenhouse effects, but rather the one humans make daily. The usage of fossil fuel increases the planet’s temperature to an excessive degree, gradually making it less habitable. “The rolling back of environmental rules and regulations has us gasping for air due to the cumulative public health impacts from the burning of fossil fuels” said Ali.

Low-income and minority communities are hit harder by climate change. According to a study conducted by the University of Minnesota and University of Washington and published in 2019 in the Proceedings of the National Academy of Sciences, Black and Hispanic Americans experience, on average, about 60 percent higher exposure to pollutants compared to non-Black and non-Hispanic people.

According to the Michigan Climate Action Network, Michigan has “a per capita emissions of greenhouse gasses more than 20% higher than the national average. This reliance on fossil fuels also results in pollution and health and economic impacts.” Air pollution is accountable for exacerbated hospitalizations and premature deaths every year in Michigan. As reported by Michigan Environmental Council, “Michigan has one of the highest asthma rates in the country.” However, air pollution is not the only environmental risk Michiganders face, but also contaminated water and polluted land.

There are several actions that we can take now to make drastic changes and make minority communities less vulnerable. As the election approaches, it is more important than ever to go and vote. Global warming is a serious issue that must be acted upon. President Trump has always disregarded global warming and mitigating climate change. On the other hand, his rival, Joseph R. Biden Jr., has called climate change an “emergency” that requires overhauling the nation’s energy system immediately. During his presidency, Trump pulled out of the Paris Agreement and removed clean water protections, including those necessary to protect the Great Lakes. On the contrary, Biden has promised to protect the environment with a proposed $5 trillion plan.

Henry Ford College political science professor, Dr. Anthony Perry said, “If you need a candidate that looks like you, acts like you, believes everything you believe, then you are looking for a clone, not a representative.” We vote so representatives can represent our issues and not our personal traits. Dr. Perry continues, “No candidate is going to represent you perfectly. If you think they should then you think too much about yourself and not about others. If you think they do, then you don't know them well enough. Rather, we are looking for a representative, not a savior.” Dr. Perry continues, “If the candidate we vote for or their opponent wins, we support them when they represent us, when they don't represent us, then we call them out to address our issues and our concerns.”

Professor McIlroy along with biology professor Linda Brandt organized a college-wide climate forum on Earth Day last year. Due to the pandemic, the forum was cancelled this year, but Brandt is already planning for the 2021 Climate Forum. She said, “We have money donated into our HFC Tree Fund, and I am planning to get those trees planted in April 2021. I would also at the minimum like to host virtual information sessions on the science of climate change.”

Brandt states, “Let's work to get this pandemic under control so we can clearly focus on other crucial problems. My message to everyone: WEAR YOUR MASK! Science shows masks are effective in preventing the spread of coronavirus.”