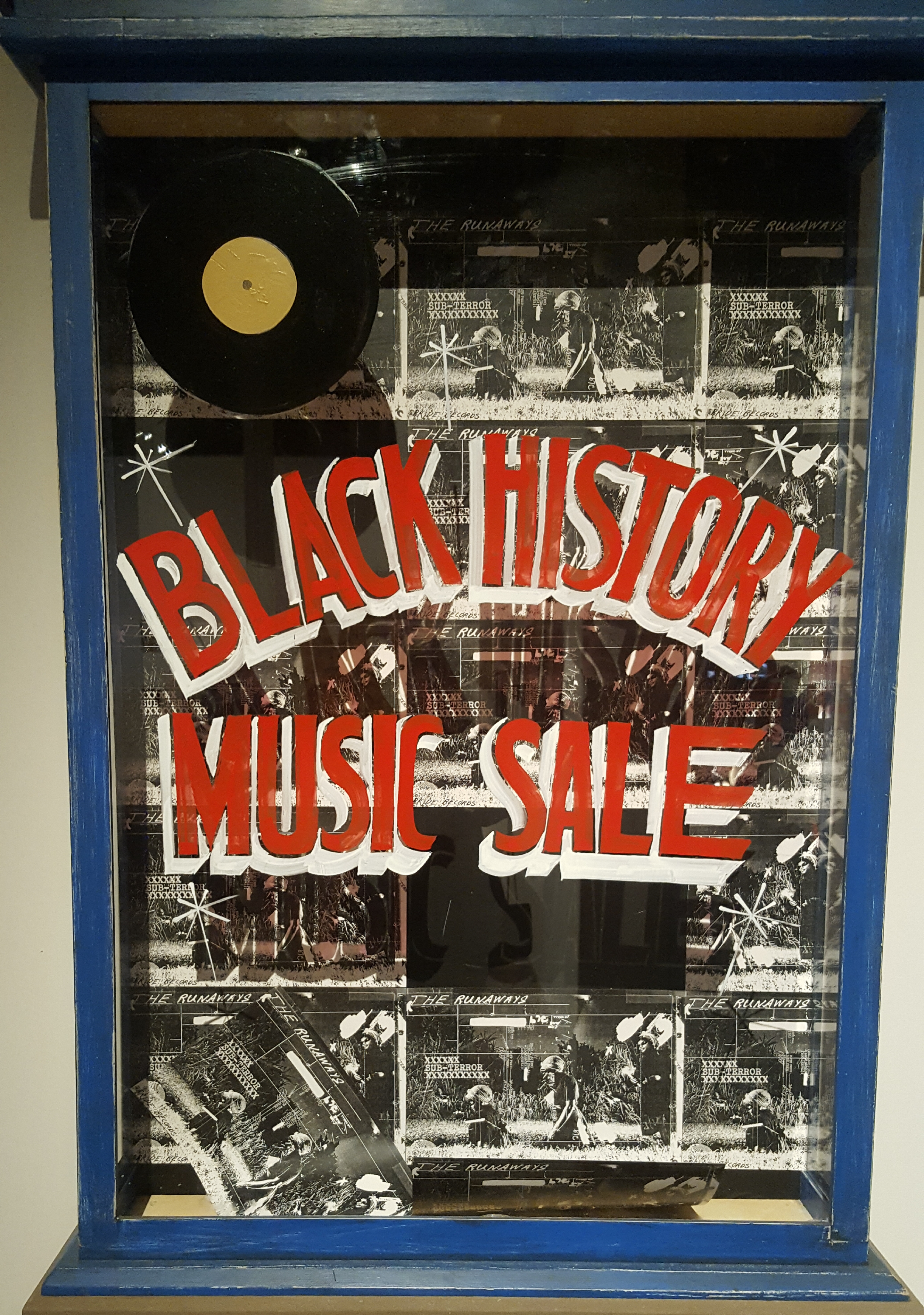 “Sonic Rebellion: Music as Resistance” at the Museum of Contemporary Art Detroit explores the city’s rich musical artistry and the powerful ways it can been used to combat social and political injustices. Inspired by events of the 1967 “rebellion” in Detroit to present day resistance movements, the “Sonic Rebellion” exhibit paints a poignant and complicated picture of the interconnectedness of music, art and politics and the ability these creative avenues have to raise voices of resistance.

In the middle of the main gallery room sits a pillory - a wooden device in which one would stand with their hands and head locked in place for public punishment. A microphone is placed in front. The piece, by Hank Willis Thomas, is called “What Goes Without Saying,” and a placard explains that the “microphone symbolically listens to the unheard voices of the enslaved.”

A separate room of the exhibit is dedicated entirely to Mickalene Thomas’ piece, “Do I Look Like a Lady?” The installation juxtaposes several video clips of prominent black female entertainers on two large screens. Included in the clips are Whitney Houston, Josephine Baker, Eartha Kitt, and Wanda Sykes. Thomas’ work showcases the resiliency and legacy of black women performers.

Two contrasting oil paintings by Titus Kaphar entitled “2016/1963” depict the similarities faced by minority groups in the United States. Both paintings are of the nozzles of fire hoses, one modern and one more antique - the antique one is meant to represent a fire hose turned on civil rights protesters in 1963; the modern one is meant to portray a fire hose turned on indigenous protesters resisting the Dakota Pipeline in North Dakota.

The exhibit contains several large, eye-catching pieces. One is by Andrea Bowers’ is “Radical Hospitality,” a neon sign wrapped in barbed wire with wind chimes dangling from it. Another hard-to-miss display is a stack of large steel barricades, titled “Monumento ao Monumento,” by Marcelo Cidade. The barricades, often meant for use as protection for people or property, are also symbolic of social and class barriers - keeping the less-privileged out and the affluent protected.

Lying on the floor of the exhibit are large prints, which museum-goers are invited to take home. They read, “You may choose to look the other way, but you can never say again that you did not know” - a famous quote made by William Wilberforce, a late 18th century British leader of the movement to end the slave trade. Perhaps most significant about these prints is that they were created in collaboration with inmates of U.S. prisons - many of whom have lost basic human rights and face heavy social stigmatization upon re-entry into their communities.

“Sonic Rebellion” also celebrates prominent black-owned labels. Perhaps one of the most significant to Detroit is the Black Forum label, created by Berry Gordy. Gordy, who also founded the Motown record company, wanted Black Forum to be a platform for the Black leaders of the time, and released eight recordings under the label. This includes “Free Huey!” a speech by Stokely Carmichael seeking the release of Huey P. Newton, the founder of the Black Panther Party. Newton and the Black Panther Party are featured frequently throughout the exhibit, including a series of newspaper covers drawn by Emory Douglas from the weekly publication, “The Black Panther.”

“Sonic Rebellion: Music as Resistance” will run until Jan. 7 at MOCAD.