“Tag….You’re It: Outside Art Comes In” 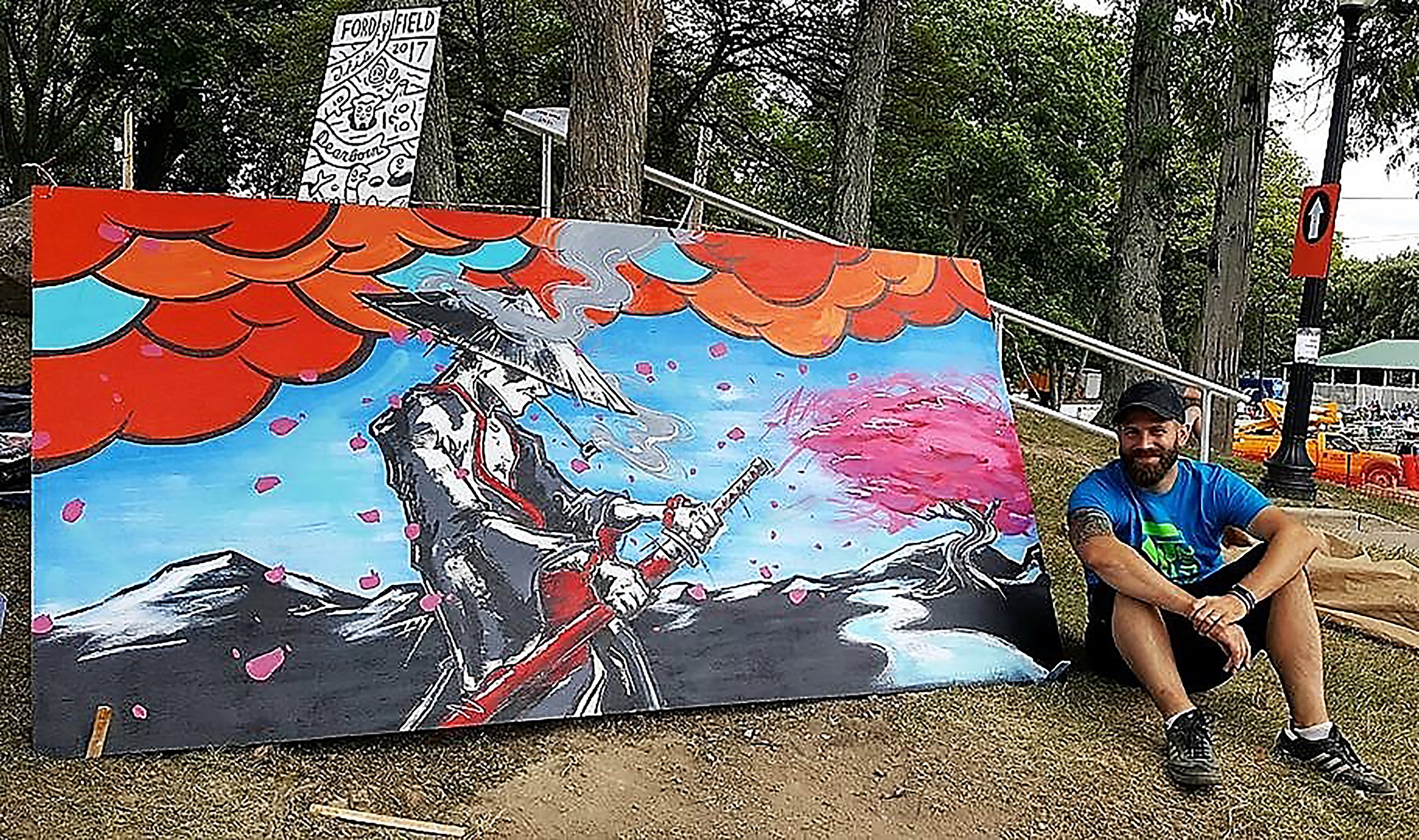 “To be so passionate about art that you do it whether it’s legal or not, I’ve always been attracted to that type of attitude,” says Steve Glazer, Instructor of Art, Director of Exhibitions and Interim Chair of Fine and Performing Arts. The latest HFC Sisson Gallery Exhibit, “Tag...You’re It: Outside Art Comes In,” has been a long time coming for Glazer, who fell in love with graffiti the first time he saw it while riding on the subway in New York City in the 1970s. He deeply admired artists like Keith Haring and Jean-Michel Basquiat for their methods of social and political commentary through bold public art. “I’ve always wanted to have an exhibit like this. I just couldn’t find the right connections to make it happen. When EmmaJean [Woodyard from the Dearborn Community Fund] approached me with the idea of ‘Paint out in the Park,’ it was the perfect coming together.”

Over the weekend of Aug. 4-6, Dearborn Homecoming, a community festival in its 38th year, held a new activity called “Paint out in the Park.” The event was sponsored by Green Brain Comics and coordinated by Dearborn-based mural artist, Sunshine Durant and the Dearborn Community Fund, a non-profit organization committed to supporting projects and the arts citywide. Over the course of three days, 32 artists from Southeast Michigan were invited to create art live for festival goers, covering 4 x 8 sheets of plywood with their individual style.

“Being able to be part of the Dearborn Homecoming event was such an honor,” says Detroit “Hooligan artist,” Kyle RISE Irving. “If I were to say that live painting, on that large of a scale and with hundreds of people walking by wasn’t nerve wracking, I would be completely lying. There is always the risk of making a mistake, or being out of your comfort zone, but it was these feelings that I thrived and drew from,” said Irving. “At the end of the day, it was proper planning, ensuring that my supplies were ready and just having fun that made the piece come out so well. I loved interacting with the crowd and seeing their faces as the piece evolved from a blank board to the layered piece that drew people in.”

Both street and fine artists were invited to participate in the event, showing up with their favorite paints: some spray, some acrylic, some oil. Each artist was given a large, already primed board and the roped off space to create. Many leaned against a tree and painted, others ended up lying on top of their work as each detail was defined.

Local artist couple Luke MacGilvray and Sanda Cook were delighted with the experience. “Normally I have an idea of what I’m going to do but a 4 x 8 is huge!” laughs MacGilvray, curator of Hamtramck Atomic Cafe, a visiting artist gallery. “This time I had zero clue. I took a pencil and just started sketching. Each day it changed. By the end I was throwing paint like Jackson Pollack.” MacGilvray’s finished product of acrylic, ink and enamel is a brilliantly colored portrayal of Jörmungandr, or World’s Serpent, in Norse Mythology. “Working with Sunshine was great. We were outside, with the freedom of whatever falls out of your paintbrush.” His gaze sweeps the room, taking in the breadth of the exhibit. “Look how different they all are!” he says.

Sanda Cook, with a love for being involved in community art, reveled in her surroundings. She incorporated elements of nature into her piece, painting blades of grass into the background and using leaves from a nearby tree as stencils. She says she found the vibe and energy of the crowd exciting, and her place under the tree magical. “I just wanted to capture that moment,” she said, sharing why she makes art. “I’m a spiritual person. I believe there is so much beauty in many forms on this planet and I believe that all mankind should have that beauty, to overcome obstacles and find greater good.” Festival attendees had the opportunity to watch and vote for their favorite pieces throughout the weekend. Two “People’s Choice Awards” were selected through these votes and a panel of three jurors named two paintings “Best in Show.” One of these was awarded to a former HFC student.

Through the initiatives of Glazer, 21 pieces have come inside the Sisson Gallery to be enjoyed by the HFC community.

“I wondered how people would react to street art in an academic gallery.” Glazer ponders. “How would the art change when we brought inside?”

“Street art is having a renaissance. It’s immediate, of the times,” Glazer continues. “All you have to do is drive down Grand River Ave. south of Warren or to Eastern Market to see that. My students are familiar with it. I want them to see it in the gallery. If they graduate in the art program, eventually they will need to be a part of a student show in here. I want them to see the options. These big pieces, bright colors, and animated figures, it’s stuff they’re used to and can relate with.”

“Several pieces here don’t have artist names. They have monikers instead and don’t want to be known.” Glazer is giddy with the illicitness of it all.

Armando Perez, graphic design student at HFC, stands and stares at the samurai soldier in Kyle Irving’s “Masterless.” Perez says of Irving’s samurai,“He’s relaxed, but ready, with his hand on his sword. I like it.” Perez grew up in Detroit and says the art in this exhibit reminds him of the gems often popping up in the city. “You’d be walking home from somewhere, and there’d be something cool that wasn’t there a few days before.” “We are blessed with such amazing talent in this exhibit, “says Dr. Jennifer Ernst, Dean of the School of Liberal Arts at HFC. “I love this art because it displays such passion and this exhibit in part because it is a riot of color. I like that the community street art, little ‘a,’ is coming into the academic gallery, now big ‘A,’ and being admired.”

Mary Gagnon, muralist and community activist, grew up in Southwest Detroit where graffiti and public art was a vibrant community expression. It wasn’t uncommon to see artists “tagging” under bridges and on the active train line near her home. Tagging is the “signature” of a street artist. “It seemed something natural and organic to do, to take up space in your own neighborhood and on its walls.” Gagnon feels the trend of street art in the city now is much different than the cultural statements she appreciated from a young age.

“It’s a tale of two cities, graffiti to street art,” Gagnon says. “It once was a sign that the true community was thriving, but now, with the gentrification of the city, much of it has become corporate. It was gritty and raw and punishable by severe laws. Now it’s monetized, with corporations hiring artists from upscale Detroit, paying a lot of money and giving a lot of wall space. Real graffiti artists are still here in the city. They’re still throwing tags while their culture is stolen, sold out from underneath therm. These artists aren’t the ones profiting from the acceptance of ‘street art.’”

Because of his love for the work and desire to share it, Glazer has arranged for this exhibition to travel to four other school across the state. “If you live in a smaller community, you don’t have this type of art being produced. Detroit is one of the most vibrant areas for art in Michigan.”

“If you go home and say to someone, ‘I keep thinking about that piece.’ If it’s changed a moment in your life, the gallery has purpose,” Glazer says. “Come by and tell me you like it or don’t like it and why. I want to hear that.”