Human to Human: A Personal Connection 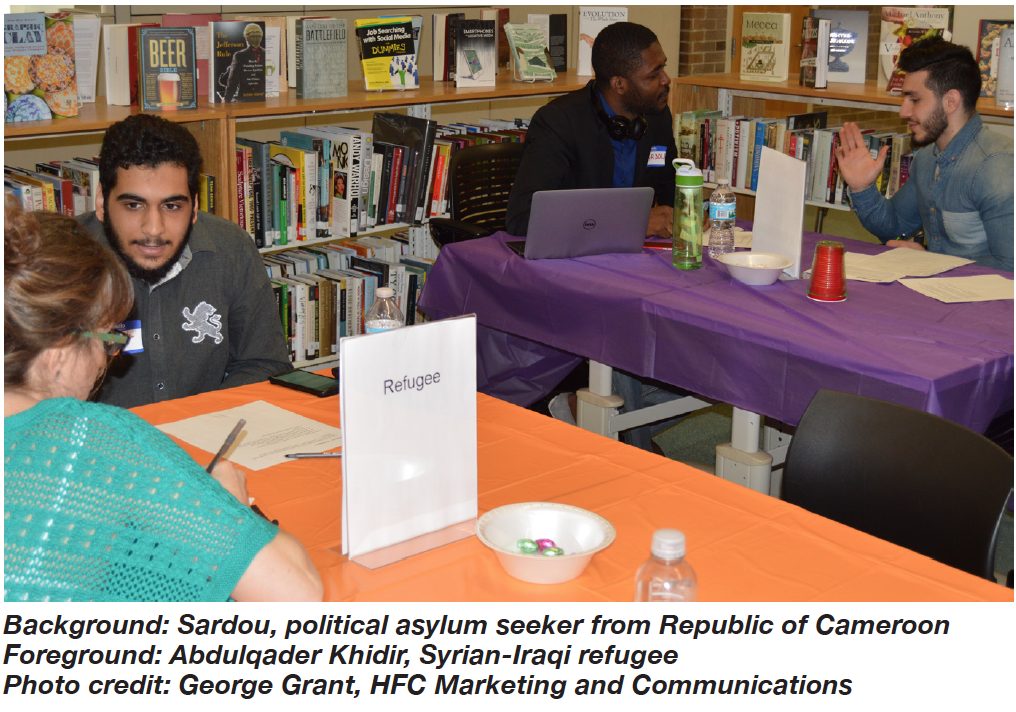 “Don’t judge me before you know me.” This HFC student doesn’t wish to be defined by her appearance, her dress, religion or race. “We all have similarities. We are all human beings. Know me as a human first.”

President Trump’s travel ban continues to be stalled in courts regarding six Muslim-majority, primarily Arab countries. The nation’s refugee resettlement program maintains its 120 day suspension, now including severely war-torn Syria, with a total cap for refugees permitted in 2017 reduced by 55 percent. As such, regardless of the revisions made to the president’s executive order in March, which include the removal of discriminatory religious language, it continues to be better known as the “Muslim ban.”

Following January’s infamous E.O., the nation saw an outpouring of support from Americans of diverse religions and races in many major cities standing in protest of the “Muslim ban” and Islamophobia with chants like, “No hate. No fear. Immigrants are welcome here.” Locally, rallies thronged Detroit Metro Airport, Hamtramck and Dearborn, while droves of college students marched outside Wayne State University. At the University of Michigan, hundreds of students and faculty, including many of Christian and Jewish faith, made a protective chain around praying Muslim students after hearing one student had been threatened for her faith. The crowd held homemade signs saying, “You belong here” and “Love Wins.” The outcry from non-Muslim Americans on behalf of their neighbors, colleagues, student peers and friends struggling with fear of discrimination, safety, and the uncertainty of family connections overseas has been a true picture of a great America.

But where do we go from here? How do we sustain and grow this greatness in our daily lives? On the HFC campus, with continued effort to inform and educate, the HFC Arab Cultural Studies Program held a conference in March: “Arab Americans: A Spectrum of Identity.” The agenda was to identify and address common stereotypes and misconceptions of Arab Americans and share personal testimony to display the depth and breadth of Arab culture and experience.

Dr. Tarek A. Joseph, head of the Department of Geography at HFC, clarified commonalities and differences within Arab American communities. He dispelled misinformation such as, although the majority of Arab Americans practice Christianity, and although Arabs are not the leading demographic in our country or the world’s Muslim population, the media and press will often interchange Arab (someone who speaks Arabic) with Muslim (someone who practices Islam.) Dr. Joseph also reflected on how stereotypes and misconceptions are strengthened by the negative villainous, if not terrorist, imagery of Arabs portrayed in television and movies, rather than the true capturing of common celebratory events such as family weddings in a mosque or a child’s baptism in a church. These similar tactics and racial propaganda have been used in media for decades to inaccurately portray people of color in every minority. This shaping of perception by those in power, those behind the camera or pen, has aided in the sluggishness of true equal rights. The question is then, how do each of us, no matter our religion or race, counter these devices and obtain true and fair understanding of one another?

In February, the HFC Muslim Student Association held a rally on campus to protest President Trump’s travel ban and advocate campus diversity and understanding. One speaker challenged the group of many nationalities and faiths assembled on that day, not to leave the assembly without speaking to three new people whom they didn’t know. She sought to motivate the crowd to seek awareness of the political issues and trials at hand as well as seek awareness of one another. To disband social barriers, each person was encouraged to speak to a person who is not in his or her natural friend group, who one may normally pass by in the hallway or on the sidewalk, and who looks and talks differently from oneself.

Is this a hard thing for us to do? HFC students of various race and cultures give their perspective: “It’s sometimes easier to talk to or befriend a person that is from your ethnicity. While I have tried to befriend others outside my race or age group, it does get a little uncomfortable and is hard to find exactly where you fit in. We are very separated [at HFC]. Maybe we’re all just shy or just really afraid of other people judging us.”

“Even between Arab countries we separate and keep to ourselves. We stick with our own groups. To what you know, what you’re comfortable with.”

“HFC is a very connected and open-minded school. I think we’re lucky at HFC because we’re a very diverse school.”

“I don’t find it hard to approach people who appear different than me, but I don’t find it easy either. I love meeting all sorts of people, but I feel like people don’t know what to expect from me because I wear a scarf. And I know in most cases it doesn’t come from a place of discrimination, it’s just that a lot of people don’t understand Islam and they don’t want to offend me in any way, so they keep their distance from me.”

“All of my friends are from outside my race/culture. I guess maybe the fact that I’m the only white person in my group of friends could mean there is a separation. Personally, I don’t have any difficulty in crossing that gap. Really, I almost prefer to become friends with people with different backgrounds and perspectives from my own.”

“Since it’s my first year at HFC, I do feel kind of like an outsider already. I notice that people of the same race or ethnic background tend to click very easily and it is very hard to try and break the barrier. It may not be high school, but I’ve seen a lot of cliques on campus. But I’m not saying that people aren’t nice and respectful.” “They all respect me as I respect them.”

On April 19, the HFC Eshleman Library and Council for World Cultures teamed up to take breaking social barriers and promoting diversity to the next level. Together they assembled a living, breathing and talking library of varied interests and honest experiences portrayed by individuals on campus. From 10:00 a.m. - 3:00 p.m., library tables normally used for quiet study were transformed into chat sites between volunteer “books” and student patrons, who checked them out for 15 minute conversations at a time. This unusual exercise was part of a larger, global initiative, titled the “Human Library.” The goal was to create an open and positive atmosphere that allows strangers to engage in one-on-one conversations as a way of contesting prejudices and dispelling stereotypes.

The first human library was developed in Copenhagen in 2000 by a small youth organization called Stop the Violence as a project for the Roskilde Festival, Northern Europe’s largest cultural and music festival. The original event, aimed at building positive relationships between festival visitors, was open four days in a row and offered over 50 different human books that were checked out by over 1,000 people. Many involved in the experiment were shocked by the overwhelming interest and respectful participation that came from festival guests.

After this initial success, co-creator Ronnie Albergel began to promote the program concept worldwide and the Human Library Organization was formed. Today it is estimated to have been presented in over 70 countries with the format often sponsored and hosted by local organizations. HFC Eshleman librarian Tessa Betts heard about the program and sought interest and collaboration between the Eshleman Library and the Council of World Cultures to bring it to fruition.

Fifteen brave student and faculty volunteers signed up to share their journeys, their passions, their wisdom and their humanity. Under titles such as “The Accidental Archaeologist,” “Parenting an Autistic Child,” “Arab/Australian: Happily Lost in America,” “The Best Place in the World: Freedom House” and “Religion of Humanity,” authors shared deep struggles, thankfulness, sources of joy, and unique life and global perspectives. Through open dialogue, permission for curiosity and an absence of defences, authors sought to build awareness and challenge misconceptions of their topic. Some chose only one word most important to their experience: “Feminist,” “Bisexual,” “Refugee.”

Eshleman Library will be hosting another Human Library event in the fall semester. Interested parties should contact Tessa Betts at tbetts2@hfcc.edu to volunteer.

These campus events put forth by HFC groups, the college, and individual students and faculty are making tangible steps toward promoting understanding and open dialogue between diverse cultures and beliefs. But we need more, HFC students! If you are finding it difficult to connect, you are not alone. Not in your neighborhood, not in your community and not here at HFC. It isn’t easy to extend ourselves to have unfamiliar interactions and form new friendships. The tech-crazy society we live in separates us even further from the living, learning, struggling, joy-filled people around us. As we look at our screens and listen to what others want us to think of one another, we miss the truth that can only be found in self discovery. One-on-one interaction with people unlike us, that is how we grow, how we understand and how we find compassion. We can do this, HFC. I challenge us.