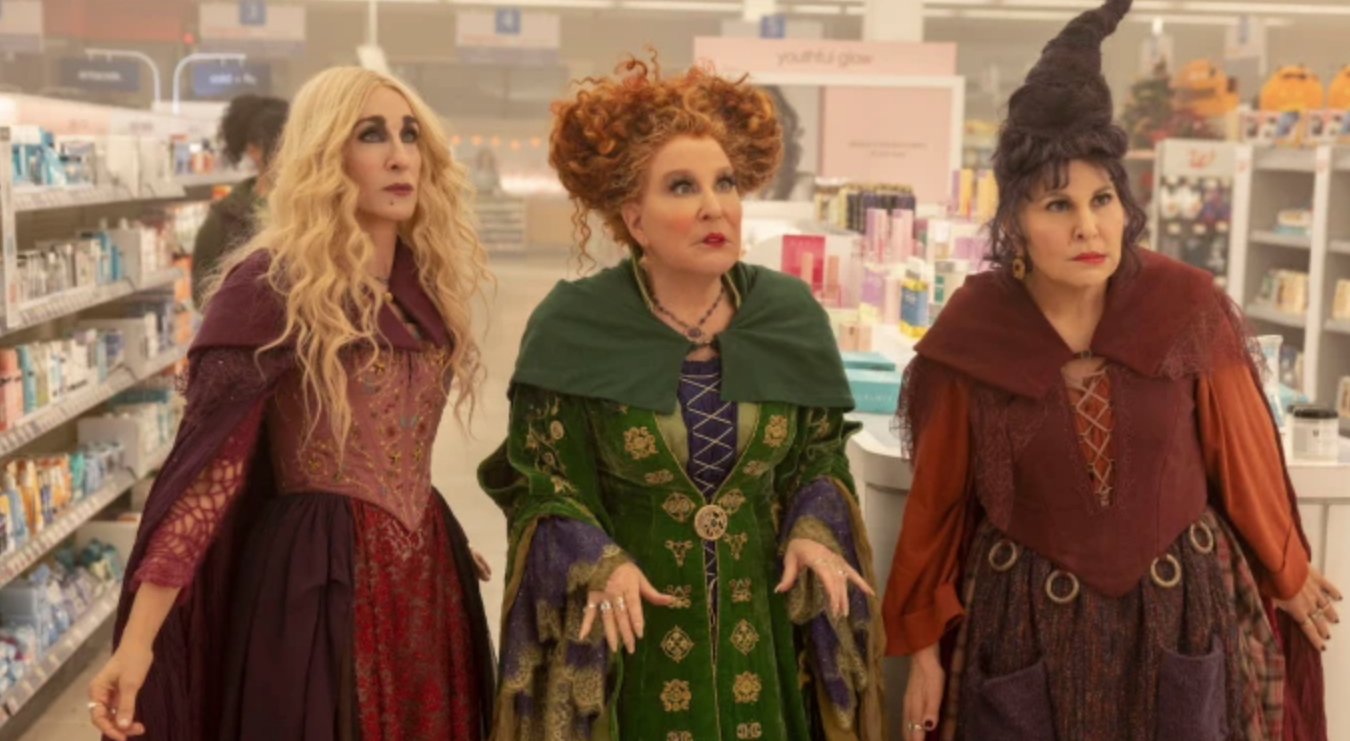 Sarah Jessica Parker, Bette Midler and Kathy Najimy, who starred in 1993's "Hocus Pocus," are back as the Sanderson sisters in "Hocus Pocus 2" courtesy Disney

In July of 1993, Disney released its Halloween-inspired family feature “Hocus Pocus” to little fanfare. While the film was not particularly popular with its target audience of children (and certainly not with adults) at the time, “Hocus Pocus” has been steadily gaining a cult following that has become impossible for Disney to ignore in recent years. “Hocus Pocus” merchandise has been popping up by the boatload at retailers like Spirit Halloween and Hot Topic, and Hocus Pocus-themed mascots made their debut at Disney theme parks and cruise lines this year. With “Hocus Pocus” reaching iconic status and all signs pointing to Millennial nostalgia being Hollywood’s latest cash cow (Disney’s Incredibles 2 and live-action The Lion King remake being among the highest-grossing films of all time), it seemed inevitable that Disney would produce another one of its many remakes, reboots, and/or sequels to join the Hocus Pocus canon.

When “Hocus Pocus 2” was officially announced by Disney in 2014 with original cast members Bette Midler, Sarah Jessica Parker, and Kathy Najimy set to reprise their roles as the Sanderson sisters, excitement was building both in adults who fell in love with the world of Hocus Pocus in the 90s and in children who were introduced to the flick by parents and older siblings. It’s anyone’s guess why the much-anticipated sequel has taken the better part of a decade to make from development to release, but it’s clear that the entertainment market is in a different place than it was in the mid-2010s. Audiences are beginning to grow tired of the rehashing of existing intellectual property. So, does Hocus Pocus 2 live up to its early hype, or will it join the growing club of failed attempts to capture the magic of an original film?

The film opens with the Sanderson sisters getting the Cruella treatment—a sympathetic backstory to show that they weren’t always bad; it was others’ mistreatment that made them that way. Not only is this a tired trope among the tired genre of remakes and reboots, but it deals a damaging blow to one of the aspects of “Hocus Pocus” that made the original film such a fun watch. In the 1993 film, the Sanderson sisters turn people into cats and eat the souls of children to stay young. The trio are absolutely, unquestionably, irredeemably evil, making it all the more satisfying to see them defeated in the end. While showing the mistreatment of the Sanderson sisters by the settlers of 1600s Salem doesn’t excuse their future actions, it also doesn’t reveal any meaningful information or develop them as characters. This and the overstated performances by the actresses playing the younger version of the sisters makes for a feeling that the first 10 minutes of the film could have been put to better use.

“Hocus Pocus 2” continued to mishandle its runtime throughout its first act. The introduction of main characters Becca, Izzy, and Cassie (played by Whitney Peak, Belissa Escobedo, and Lilia Buckingham respectively) along with much of the plot exposition felt like a rushed afterthought, with the only real foreshadowing to the events of the film being semi-antagonist Gilbert (Sam Richardson) retelling the events of the first film as the story’s momentum came to a screeching halt. When the sisters do appear, it gives more of a feeling of whiplash than a sense that this is the big event that the movie has been building up to so far.

The main conflict of the film comes about when the Sanderson sisters decide that they must kill Salem’s Mayor Traske to complete a spell that promises to make the three witches all-powerful. Traske is the father of Cassie, estranged best friend of protagonists Becca and Izzy, and a descendant of the reverend who banished the sisters from their village hundreds of years ago. As Becca and Izzy try to stop the Sanderson sisters, Midler, Parker, and Najimy give strong comedic performances on par with those in the original film. Gags such as the witches being tricked by Snapchat filters and riding through the sky on Roomba vacuums make for the movie’s funniest moments and help set its humor apart from the 1993 original. The B-plot following the slapstick adventures of Gilbert and undead colonial-era man Billy Butcherson (played by Doug Jones, prolific creature actor and the only returning cast member apart from Midler, Parker, and Najimy) was also comedically solid and rarely felt like filler.

Another modern twist added to the film were a few passing lines of dialogue about how the Sanderson sisters were unfairly persecuted due to their gender and how ancient beliefs about witchcraft were rooted in misogyny. This concept seemed to be forgotten about after being mentioned once or twice at the start of the movie. Further developing this idea of the rise of feminism in the 21st century affecting how the Sanderson sisters are perceived could have made for an interesting plot angle. While Gilbert’s motivations for tricking Becca and Izzy into resurrecting the Sanderson sisters seem to be that he is sympathetic towards the trio of witches, the plot point still felt half-baked and full of wasted potential.

In its latter half, “Hocus Pocus 2” seems to find its footing with character dynamics and plot momentum. Becca, Izzy, and Cassie come to the forefront of the film after spending much of it as glorified side characters. The three young protagonists then discover that they, too, have the powers of witchcraft and utilize Winifred Sanderson’s (Midler) sentient spell book to defeat the sisters. However, the film fumbles in its resolution. Winifred sacrifices herself after her sisters disappear following their spell, insisting that she can’t bear to live without them. Making the vaporization of the sisters feel more like a bittersweet goodbye than a triumphant defeat was a choice, and one that made the ending of the film significantly less satisfying than the original. Even as a standalone film, the ambivalence between the three witches being sadistic villains and misunderstood anti-heroes leads to a more indifferent feeling at the film’s conclusion than anything else.

How does the film stack up against its predecessor? While Hocus Pocus 2 is definitely not an improvement on the original, it had a handful of enjoyable jokes and character moments from the beloved Sanderson sisters. The witches’ rendition of Blondie’s “One Way or Another” (which doubled as a spell to hypnotize the Salem townsfolk) was one of the film’s highlights, being an homage to the original without feeling like a complete rehashing. In fact, not being overly referential to the original was one of the film’s biggest strengths, with there certainly being plenty of Easter eggs for returning fans while still making sense as a standalone movie. While many fans were dissatisfied with the only returning characters being the Sanderson sisters and Billy Butcherson, introducing a new cast helped alleviate the feeling of staleness and been-there-done-that prevalent in many other franchise reboots. Thora Birch, who played protagonist Dani in Hocus Pocus, told Entertainment Tonight that she planned to appear in the sequel but dropped out due to scheduling conflicts.

Overall, “Hocus Pocus 2” was bookended by its weakest points, with a prologue that felt like a waste of time and an unsatisfying ending. While both sequences were intended to develop the iconic antagonists, their lack of complexity is what made them work as characters. The film would have gained more from adding nuance to how the townsfolk perceive the Sanderson sisters in the film instead of trying to develop characters who are at their best when they are grotesque and sadistic for the fun of it. The Sanderson sisters’ intentions differ greatly from movie to movie, with their main goal being to exact revenge on a town that had wronged them instead of taking lives for their own gain like in the original. Even though the performances given by the actresses playing the sisters are equal in quality to those in the first film, the changes made to their motivations will leave audiences feeling like they are watching a completely different set of witchy sisters. Overall, “Hocus Pocus 2” was watchable yet forgettable and will likely not be joining its predecessor in yearly festive film rotations. The main characters’ arc was uninteresting and hard to invest in and stakes felt low thanks to the confusing motivations of the antagonists. While performances given by the returning cast members made for an enjoyable watch, Hocus Pocus 2 pales in comparison to the original in every aspect.

“Hocus Pocus 2” is available to stream on Disney Plus.