The Return to Middle Earth, Review of “Rings of Power” 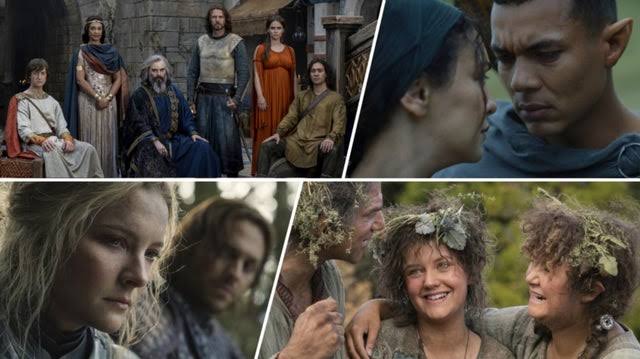 “The Lord of The Rings: Rings of Power” is an Amazon original series created by showrunners J.D. Payne and Patrick McKay, based on J.R.R. Tolkein’s Lord of the Rings books about the fantasy world of Middle Earth. The show sets the precedent for the most expensive TV show of all time, at $715 million. While inspired by the Peter Jackson films (“Lord of the Rings: Fellowship of the Rings,” “The Hobbit: An Unexpected Journey”) he, nor the New Zealand special effects production company, Weta Workshop (“Lord of the Rings: Fellowship of the Rings”), were involved in the making of the Amazon series. The show’s rights were bought by Amazon from the J.R.R. Tolkien’s estate under strict conditions that the show must not be a continuation or follow-up to the Hobbit or Lord of the Rings movies.

“Rings of Power” is set thousands of years before “The Hobbit: An Unexpected Journey,” in the Second Age with the show leading up to the war with the evil sorcerer, Sauron. It covers some of what happens in some of the Silmarillion, the Appendices, as well as some non-canonical storytelling. And with five seasons currently planned, there’s no telling how much material the show will be covering. Currently the show breaks down into four storylines, ebbing into each other during the episodes, and following a different character’s path.

Two of the four main characters of “Rings of Power” will be familiar to fans of either the books or the Jackson films. Elf warrior, Galadriel, who in the Peter Jackson films helped guide Frodo on the quest to destroy the ring, is in this prequel played by Morfydd Clark (“Pride and Prejudice and Zombies,” “The Personal History of David Copperfield”) whose mission thus far in the series is avenging her brother by killing Sauron. A parallel storyline follows the elf lord, Elrond, played by Robert Aramayo (“Game of Thrones,” “The King’s Man”) who negotiates an agreement with Prince Durin IV of the Dwarf kingdom to build the forge that would eventually create The One Ring.

Two new characters created specifically for “Rings of Power” make up the other two main storylines. They are a young “harfoot,” one of three races that precede hobbits, named Eleanor ‘Nori’ Brandyfoot, played by Markella Kavenagh (“Picnic at Hanging Rock,” “True History of the Kelly Gang”), and a Silvan Elf named Arondir, played by Ismael Cruz Córdova (“Mary Queen of Scots, Berlin Station”). Nori’s storyline follows the harfoots on their constant struggle to be unseen by the other races, only to find and help a mysterious stranger who fell to earth, played by Daniel Weyman (“Foyle’s War,” “Silent Witness”). Meanwhile Arondir is on the path of the wood elves protecting the lands from dark forces, as well as bringing in the forbidden romance between him and a human healer, Bronwyn, almost paralleling the story of Aragon and Awran.

Rings of Power includes a diverse cast with actors of color in prominent roles. Unfortunately Tolkien’s works have attracted the focus of white supremacists and racism, particularly with the description of his Elves:

Actors Ismael Cruz Córdova, and Sophia Nomvete(“The Tempest,” “Swashbuckle”), playing the role of Princess Disa the dwarf have received white supremacist attacks on Twitter and other social media platforms, as well as review bombing of the show.

The Rings of Power expressed their support for their actors with a Twitter post: “We stand in solidarity with our cast. #YouAreAllWelcomeHere” with three images stating:

“Stand together in absolute solidarity and against the relentless racism, threats, harassment, and abuse some of our castmates of color are being subjected to on a daily basis. We refuse to ignore it or tolerate it…”

“Lord of the Rings” stars Elijah Wood, Billy Boyd, Sean Astin and Dominic Monaghan have shown their support of the diversified casting by wearing shirts and hats designed by Don Marshall, a Social Media influencer with more than 590,000 followers who shares obscure Lord of the Rings facts. Each wore a hat or a shirt with different ears from the fantasy races in different skin colors with Tolkien’s elvish “You are all welcome here” scrolled above the ears.

Along with the diversity of the characters is the choice to utilize storytelling of strong female characters, in both lead roles and in supporting roles. The works of J.R.R. Tolkien is no stranger to strong female characters, such as Awran and Éowyn, but “Rings of Power” brings them to the forefront. By changing Galadriel’s history from the books from someone on the sidelines of the war to a worrier on a quest to kill Suaron, it allows the show to delve into a more captivating story. One more straight forward than the originals. Also with the addition of a headstrong Nori, the series shows the bravery that some hobbits will grow to possess, but also gives us a show of how kindness can fuel that bravery.

But it’s not just a story of humans, elves, dwarves and harfoots; we also see the dreaded orcs, whose appearance not only foreshadows Sauron’s return, but also introduces a dark elf villain that the orcs call “Adar,” which means “father.” Adar’s agenda in the series is yet unknown four episodes in, but his deformities suggest that he has been corrupted by a dark power.

While watching “Rings of Power,” it’s not just the stories that draws viewers in. With the effects teams favoring practical effects less than CGI, and utilizing the natural beauty of the filming locations in New Zealand it becomes something truly immersive. The head of prosthetics, Jamie Wilson, spoke on this decision: “We did decide from the outset that we would try and make this a very real show. So therefore, we tried to use real prosthetics and everything and minimize the visual effects, because there are hundreds of productions that are heavy on visual effects, and you can see it, that the human eye is getting better and better and knows what is real and knows what isn’t, because we are just getting so deloused with all this product that you begin to know.”

The soundtrack takes the base score from the original Lord of the Rings movies written by Howard Shore, “Rings of Power” score is written by composer Bear McCreary (“Battlestar Galactica”). The score helps with not just the immersive experience, but also the changes between scenes. With so many of the episodes covering multiple storylines and flowing organically in between each other, the scores can make the biggest difference for the scenes.

Then there are the choices for the costuming. The show is filled with rich vibrant colored costumes which helps to distinguish the respected locations the show is in. Pulling from historical fashions makes each area feel different, from the way the people of the Southern Lands have a Anglo-Saxon feel with simple tunics and pants to the way that the Númenoreanians have a more ancient Grecian feel with more heavily draped fabrics. This helps to distinguish between the many races visited throughout “Rings of Power.” Even the different races of Elves have different ways or styling of dress.

Overall the series is a visual masterpiece, with a well written plot. The characters feel more and more fleshed out with each episode, and with more than enough mystery to keep viewers on their toes and coming back each week.

“Lord of the Rings: Rings of Power” is now streaming on Amazon Video, with new episodes premiering on Fridays.