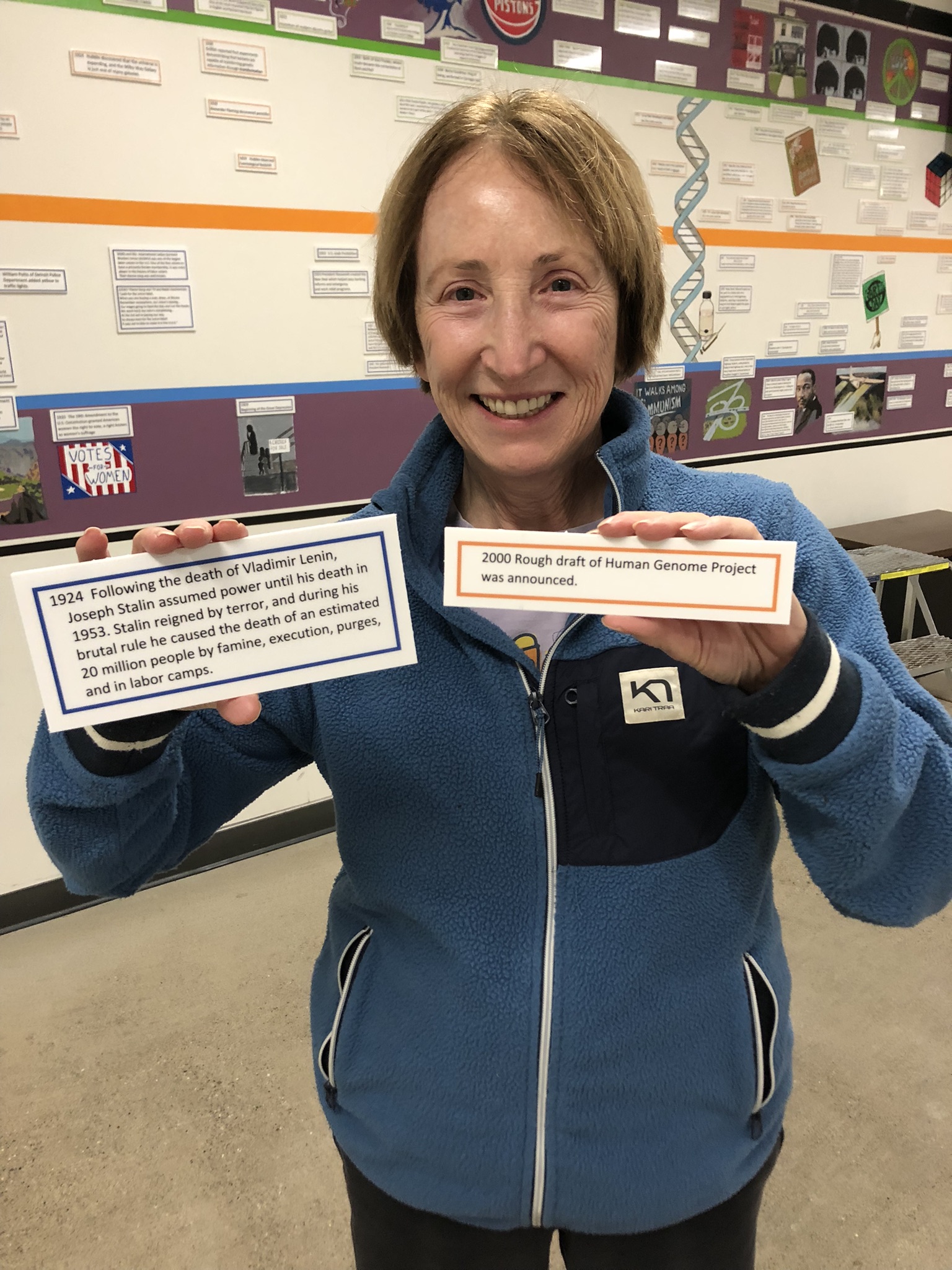 When walking the halls of the science building on Henry Ford College’s main campus, one might notice a timeline of the Earth lining some of the walls. This timeline was created by Linda Brandt, retired professor, who taught biological sciences at Henry Ford College for over 31 years. Brandt was inspired to create this project by the students that she taught. The timeline is split into three sections, each covering a different topic in human history and connecting it to important scientific discoveries.

Mirror News: Can you describe what the timeline in the science building is?

Brandt: Students in my classes have always expressed interest in how various discoveries and advances in biology corresponded to other world events, like the American Revolution and the Great Depression. To describe the timeline concisely: it is three parallel timelines on the walls of the science building, 80-plus feet long. One line illustrates scientific and technological discoveries and events, one illustrates cultural developments, and one illustrates geopolitical events. These are depicted through words, photos, and paintings. When one looks at the timeline, one can see how events in each of these areas interacted; for example, what was going on in the world of science and technology during World War II, and what was simultaneously happening in the world of culture? Going back further in time, how did the beginning of agriculture in the Middle East relate to other world events at the time and in the near future? Where in time are the births and compositions of Mozart and Beethoven? How do the worlds of culture, geopolitics, and science and technology affect the others?

MN: What was your involvement with the project? Who else was involved? How was the decision made on where to put the timeline?

Brandt: After the addition to the science building was completed, we had extensive blank walls where the old and new wings of the building connected. I presented the idea of a multidisciplinary and multicultural triple timeline to the science faculty, and they heartily approved of the project.

I asked the science faculty to send me the developments or events that in their eyes had the most influence on Earth and on humanity. Our science faculty members are very knowledgeable about all three areas, and I then put all of the suggestions into a spreadsheet. Our Biology Lab Technician at the time was Christy Ward. She is a talented artist, and she and I chose events for the first two walls that she could artistically paint, and what a great job she did.

The third wall is brick and so was not going to lend itself to artistic paintings. I began typing the word descriptions onto what we refer to as “text boxes,” with all science and technology events surrounded by an orange box, cultural by a green box, and geopolitical by a blue box.

To illustrate the events on that wall, I used photographs that my family members and I had taken, for example, of the Hagia Sophia in Istanbul, and illustrations from open sources, and printed them as 5x7 prints. Ken Donovan and Al Betancourt in Graphics mounted and laminated the text boxes and photos, and I mounted them in the appropriate places on the wall.

As we moved onto the fourth wall, we again had a talented artist in our department, a student worker named Cynthia Higgins. She and Christy proceeded to paint representations on the fourth wall, and I continued to research events and type text boxes and post the mounted versions on the walls.

MN: What were the deciding factors on what events to include?

Brandt: I tried to include all the events suggested by our faculty and added many of my own and my husband’s suggestions that seemed to be monumental events affecting humanity and Earth. Many, many more events could and probably should be included, but space and time are both limiting factors.

MN: What is the goal of the timeline? What do you hope will happen with the timeline long-term?

Brandt: I hope that anyone who walks by will learn from this triple timeline just by observing it. I see people walking slowly by it and reading the brief text boxes as they go. I see it as a very useful learning and teaching tool. One could ask “Find the birth year of your grandparents and describe the events that were occurring during that time frame and how these events affected each other.” Or “Name some events that were not included but you think should be included and tell why?” One can develop a wide assortment of writing assignments based on these timelines.

Just by coincidence when we designed the timeline, it ends in the year 2022. When COVID struck, this was a rather eerie fact. To continue it on into the future, someone will need to extend it around the corner or onto the round Planetarium outer wall. I hope someone does so.