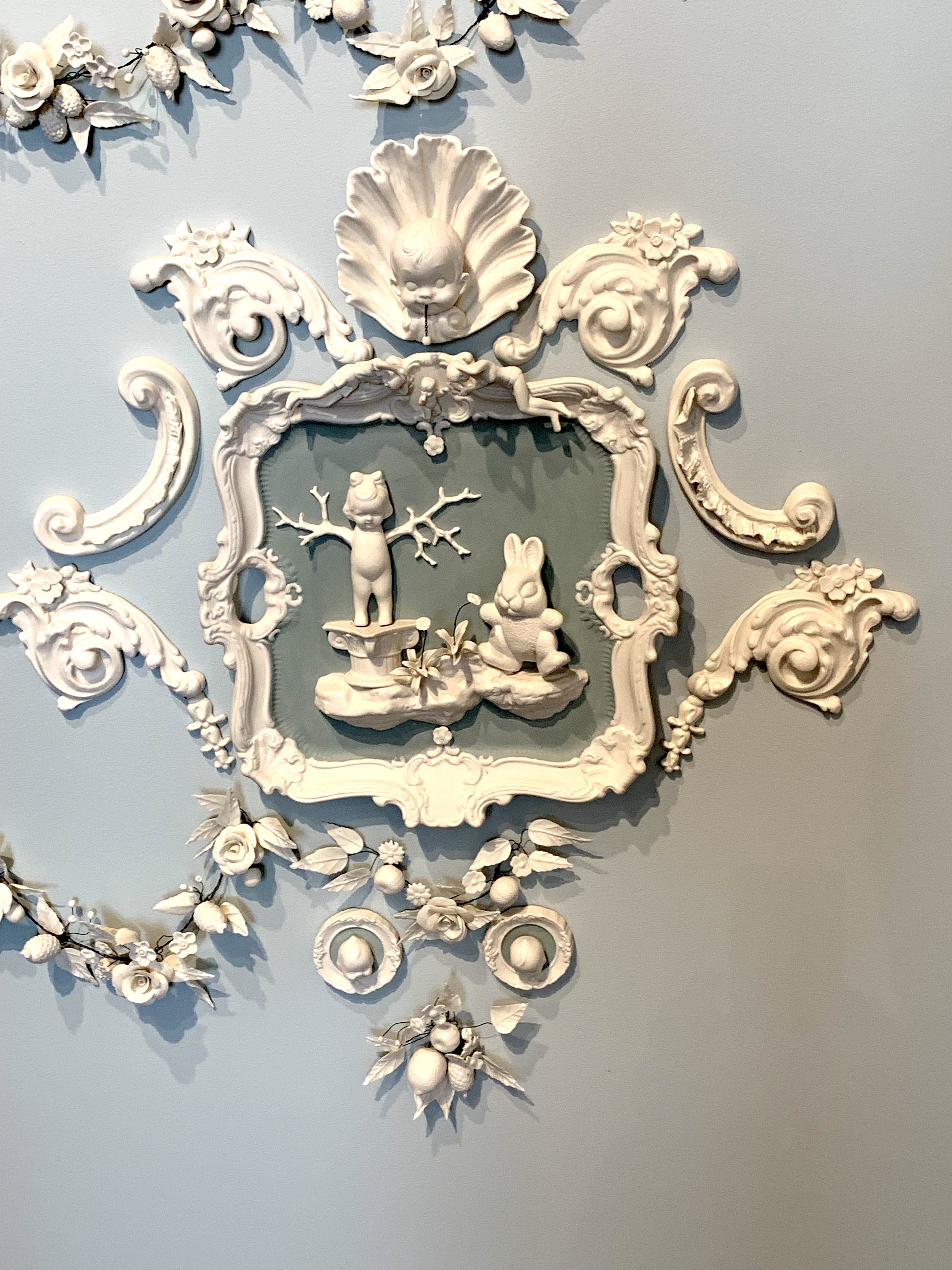 Close up of Hostile Nature 2014 by Beth Katleman

Gary Wasserman, CEO of Allied Metals Corp., is a former Detroiter who came back to Detroit because of the new possibility the bankruptcy created according to Curbed Detroit. Wasserman told The Spaces that he chose the location for his gallery because the “Eastern Market has a long history of people creating and adapting and repurposing existing spaces.”

Gallery staff Julia Callis states, “The beauty of this building is that it kept the original look and embraced its past.”

Wasserman hired Alison Wong, who has been the art director since 2015. Wong curated “Cast Illusions.”

“Cast Illusions” took five to six months to plan. “I believe director Alison did a wonderful job planning and putting this together,” said Callis, who also worked on the exhibition. This is a four-women exhibition where they blend the classics and contemporary art across varied materials which includes neon, digital animation, photography, holography, and ceramics. The inspiration behind this exhibition is to show real and hypothetical illusions and what aspects they have on life mentally and physically.

When you first walk in you will see “Arches Speculation #1” by Sarah Meyohas. Time can seem to stand still as you stare into this piece, seeing how far into the arches you can peer. It reminds me of the great mosque of Cordoba and its sea of columns. Meyohas is a conceptual artist whose practice “considers the nature and capabilities of emerging technologies in contemporary society,” according to the Wasserman Projects website. Meyohas has six art pieces in this exhibition. My favorite art piece was the “Interference” series by Sarah Meyohas. Three framed images were created using the hologram technique. Callis explained how she and Wong had to set up the lights at a certain angle and make sure the panels were on the wall at a certain height so that we could see the images. The pieces are very iridescent and depending on where you stand, the images and colors look dramatically different. Meyohas’s pieces play with your mind to where you think you can reach out and touch what you are looking at as if you are part of the illusion.

Another artist that plays with perception is Jessica Dolence, a Seattle-based artist and designer. She has two art pieces in this exhibition: Parlor Tricks, Part 1 and Part 2. Both use digital 2D and 3D animation. When looking at these pieces, I felt a sense of weight lifting off my shoulders but at the same time an eerieness. At one point I felt as though I was floating in the clouds alongside the 3D animations.

Victoria Shaheen has five visually playful art pieces in this exhibition. She uses both ceramics and neon materials in her work. Her “Brittle Bones and Burst Bubbles” reminds me of the coral reef because of the grooves and ridges. The pink part looks like the coral that has multiple branches. I like how it is an interactive piece where you can push a button to make the light glow. When the light is glowing, it feels like you are underwater looking at the naturally occurring luminescence in the ocean. Her piece, “Sifting Through My Ashes,” gives off a late-night downtown vibe you would see in Tokyo due to how elongated and almost boxy the neon lights are.

The fourth female artist in this exhibition is Beth Katleman. She has nine art pieces in this exhibition. Ken Johnson from the New York Times describes Katleman’s work as “doll-sized Rococo theaters of murder and domestic mayhem.” Callis explains how one way you can look at how Katleman creates illusions is by the material she uses. The porcelain material might look solid but in reality, it is so fragile.” At first glance, her installations “evoke a world of luxury and genteel pleasure, but a closer look reveals a more subversive agenda,” according to the Wasserman Projects website.

My two favorite pieces by Katleman are “Hostile Nature” and “Chandelier 1.” Both “Hostile Nature” and “Chandelier 1” are intricately ornamental, evoking fairy tales and classical theater. However, close up, you then see the children’s figures and you start seeing the darker side to it. The art pieces are putting on a play that at first seems whimsical but then turns macabre. It feels as though you are following the white rabbit down the rabbit hole in Alice’s Adventures in Wonderland. Katleman has a piece in this exhibition called “Alice.”

Callis said that the exhibition is as much about appreciating the work that was put into creating the art as experiencing the art itself. All four female artists create pieces that must be experienced in person to appreciate them.

After walking around the main space, you can visit the small gallery in the back room called Wasserman Works. Stepping into this space felt like you should not speak, and it has this calming aura to it because of the white walls. Wasserman Works displays small pieces of artwork for sale. Callis explains that they use it as an opportunity to collaborate with an artist that they have worked with already or to introduce a newer artist. The pieces are smaller studio work that the artists have created that wasn’t meant to be a body of work for an exhibition but it’s still a piece of work that conveys the artist’s vision.

“Cast Illusions” is open to the public until May 14. Admission is free. The gallery is open on Wednesday through Saturday from 12 p.m. - 5 p.m. Due to the pandemic, reservations are required. Wasserman Projects is located at Eastern Market at 3434 Russell St., Detroit, MI 48207.