By Lily Grantham
Editor in Chief 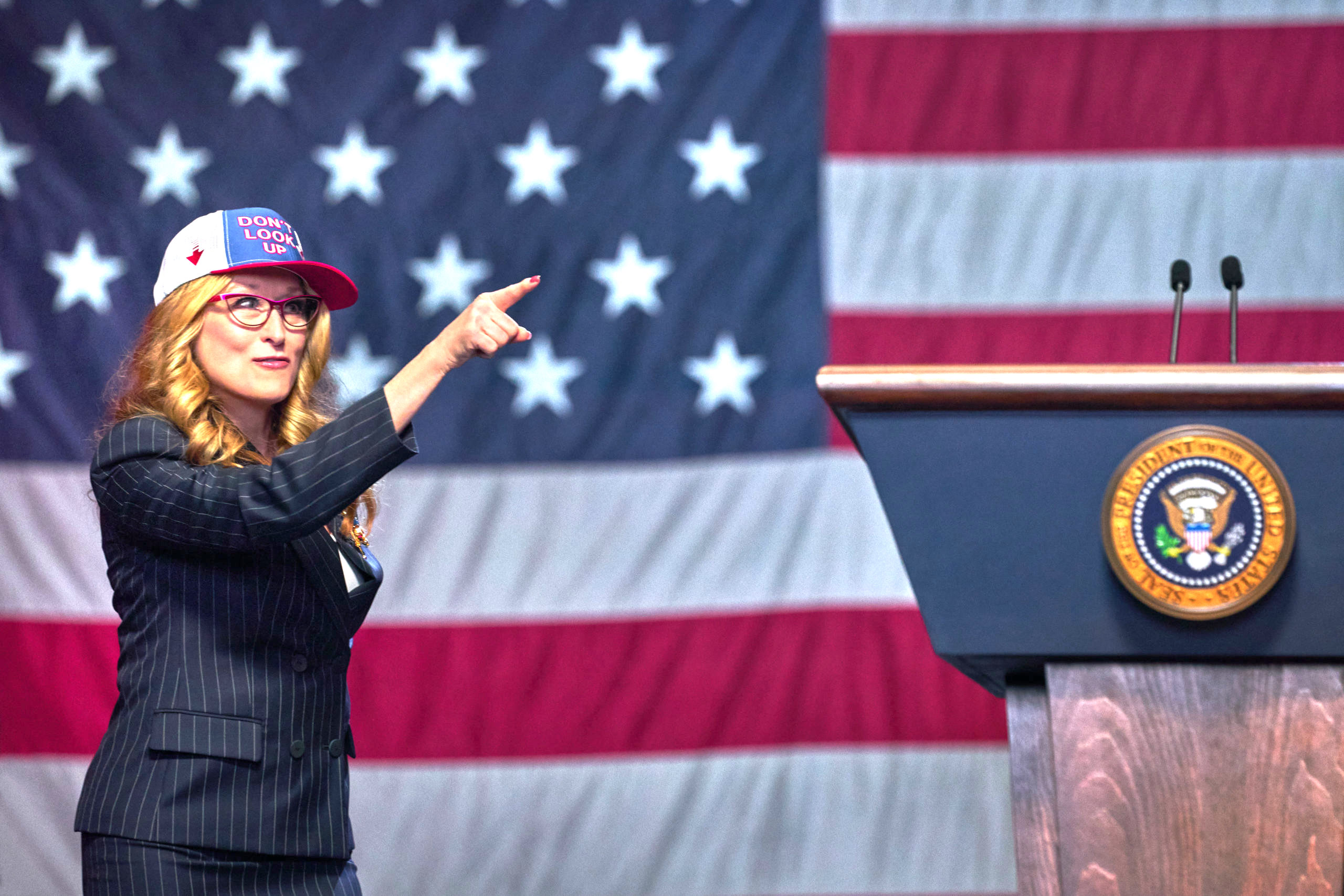 The Netflix original film, “Don’t Look Up” (dir. Adam McKay) has received popular and critical acclaim. Ten days after its release Dec. 5 last year, the two-and-a-half hour film accounted for over 152 million watch hours, according to Fox Business. It fell just short of the records set by Red Notice and Bird Box in the platform’s film popularity contest.

Many viewers were drawn to “Don’t Look Up” by its A-list cast. The film stars Leonardo Dicaprio as Dr. Randall Mindy, a low-level astronomer, and Jennifer Lawrence as Kate Dibiasky, a doctoral candidate studying under him. Meryl Streep plays U.S. President Janie Orlean, alongside Jonah Hill, acting as her chief of staff and her son. Appearances are also made by Timothée Chalamet, Cate Blanchett, Ariana Grande, and Kid Cudi.

The film begins with the two astronomers Mindy and Dibiasky who, while doing research at Michigan State University, discover an unidentified comet hurtling through space. The 9 kilometer comet, large enough to cause mass extinction, is estimated to collide with Earth in a mere six-and-a-half months.

Mindy and Dibiasky join forces with NASA to formulate a plan of action and to spread the word. President Orlean sets up a presidential task force in response to the threat, but its members refuse to take the astronomers’ claims into consideration, and sweeps the severity under the rug.

Mindy and Dibiasky take matters into their own hands and make efforts to publicize the situation. Rather than warning the population, though, their publicity stunt creates an uprising. Much of the population do not take the catastrophic phenomenon seriously, and a significant social divide is established between people who accept the science and those who do not. As the astronomers fight to save humanity, they find they also must battle ignorance and hostility.

Despite the convoluted plot, the film’s comedic relief alters its trajectory in a good way. The sarcasm and witty jokes save the film from its own disaster plot. “Don’t Look Up” also speaks to the current state of our society. The refusal of government officials to publicize the comet crisis in order to advance their political agendas over the safety of the people and the lack of respect for science professionals are prescient.

When President Orlean allows the founder of BASH, a technology company, deal with the comet crisis, despite having very little knowledge of the science and logistics behind it, the film seems to be alluding to billionaires Elon Musk and Jeff Bezos and their space projects.

Perhaps the most relevant aspect of the film, though, was the use of social media to create a stark division between people. Almost immediately following the announcement of the doomsday comet, it began trending on social media. But instead of banding together to solve the problem, people used their platforms to stir the pot.

While many tried working together to save the planet, many others refused to believe what they labeled the opposing side. Both sides fell victim to the toxicity of the media. Arguments and hostility grew, until the situation couldn’t be resolved. The dissociation of the people ultimately became more detrimental than the comet itself. This is indicative of our own society; people are divided and refuse to trust or listen to the perspectives of others to the detriment of all.

“Don’t Look Up” not only satirizes how government leaders and social media contribute to the disconnect between one another but also asks people to look at the role they may play in this disastrous trend.