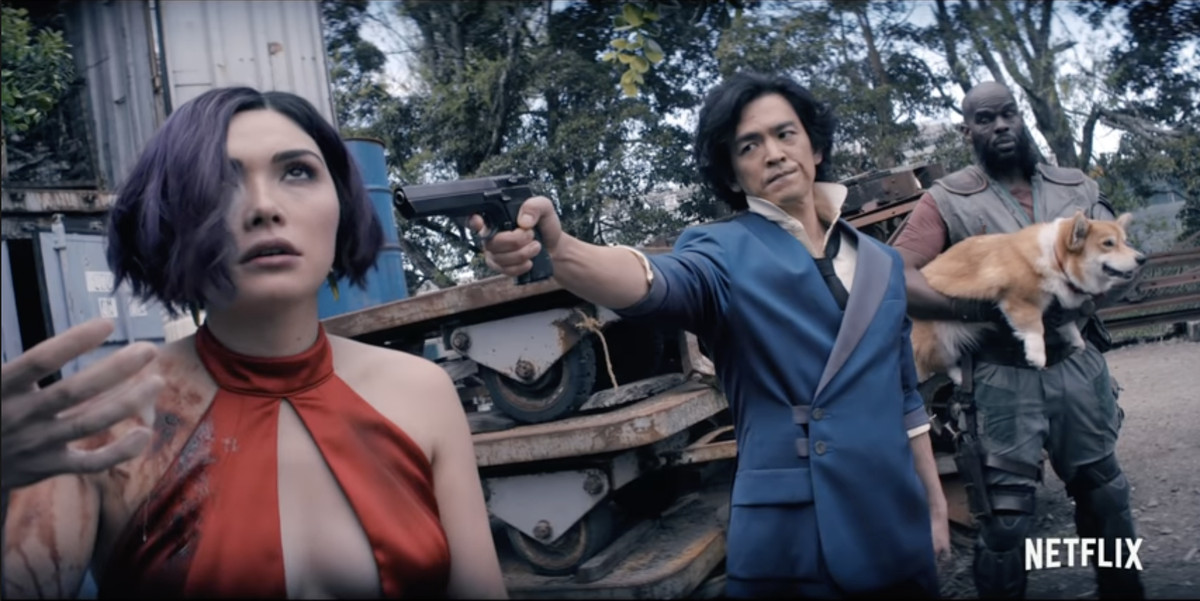 Three, two, one, Let’s jam! The critically acclaimed 1998 classic anime, “Cowboy BeBop,” has been turned into a live-action Netflix adaptation.

Set in the year 2171 after an accident makes earth almost uninhabitable, a ragtag group of bounty hunters, commonly referred to as cowboys, travels the solar system in the starship BeBop. The group consists of Spike Spiegel, played by John Cho (“Harold and Kumar”, “Star Trek Beyond”), and his partner Jet Black, played by Mustafa Shakir (“Marvels: Luke Cage,” “The Deuce”). Joining them on their travels are Faye Valentine, played by Daniella Pineda (“Jurassic World: Fallen Kingdom,” “Vampire Diaries”), and amnesiac fellow bounty hunter, “Ein,” a genetically enhanced Welsh corgi with human level-intelligence.

The award-winning original has been considered one of the greatest anime films ever produced by both fans and critics. The anime had as much heart as action. Characters were both endearing and violent, delivering comedic one-liners with noir-like wit.

Netflix’s live action adaptation has a lot to live up to. And while the live-action is definitely binge worthy and has some great comedy and action sequences, it still falls short of the original anime. Fans who cry out for line-by-line and scene-by-scene accuracy to the original will be disappointed. Some characters’ back stories have been changed to fit the new storylines. The first episode really suffers from this, with characters and plot elements being pushed in an unnaturally action-pumped way making the episode feel rushed. This also led to many fan favorite episodes, such as “Toys in the Attic,” being cut.

While anime fans may prefer the series to be true to the original, there are moments when anime may not translate well to live action. The opening credits, which is an obvious imitation of the anime opening, seems pretty goofy. The soundtrack is one of the best changes in the live-action series. The opening song, “Tank!” by the Seatbelts, is a great jazz piece that really fits the spirit of the show. Jazz bebop classics are mixed with modern riffs that add originality to the live action sequences and dialogue.

Most of the characters are fairly close to what they are in the anime, which helps to ground the show. A few of the costumes for the characters, such as Faye Valentine, have been updated to be more realistic. Gren has been made explicitly nonbinary, while in the anime, the character’s sexuality was much more mysteriously androgynous.

The lack of subtlety is where the live action series could learn from the anime original. The amount of nudity and gore in the live-action show misses the power of understatement that made the anime so groundbreaking. While the original anime wasn’t by any means a children’s show with a fair amount of bloody scenes and nudity, Netflix seems to cut to nudity and adds gratuitous violence to excess. Without giving away spoilers, the brothel scene and the fish factory scene illustrate Netflix’s penchant to overdo the sex and violence.

Despite its shortcomings, the series overall is worth a binge. The show does not take itself too seriously and the action scenes are entertaining. The plot lines of the live action series are easy enough to follow without having watched the anime. While fans of the 1998 series may see the show as lacking, Netflix’s “Cowboy Bebop” appeals to nostalgia for the anime classic while adding character updates and surprises that this fan of the original enjoyed.

“Cowboy Bebop” is rated TV-MA. Netflix has not renewed the series for a second season.