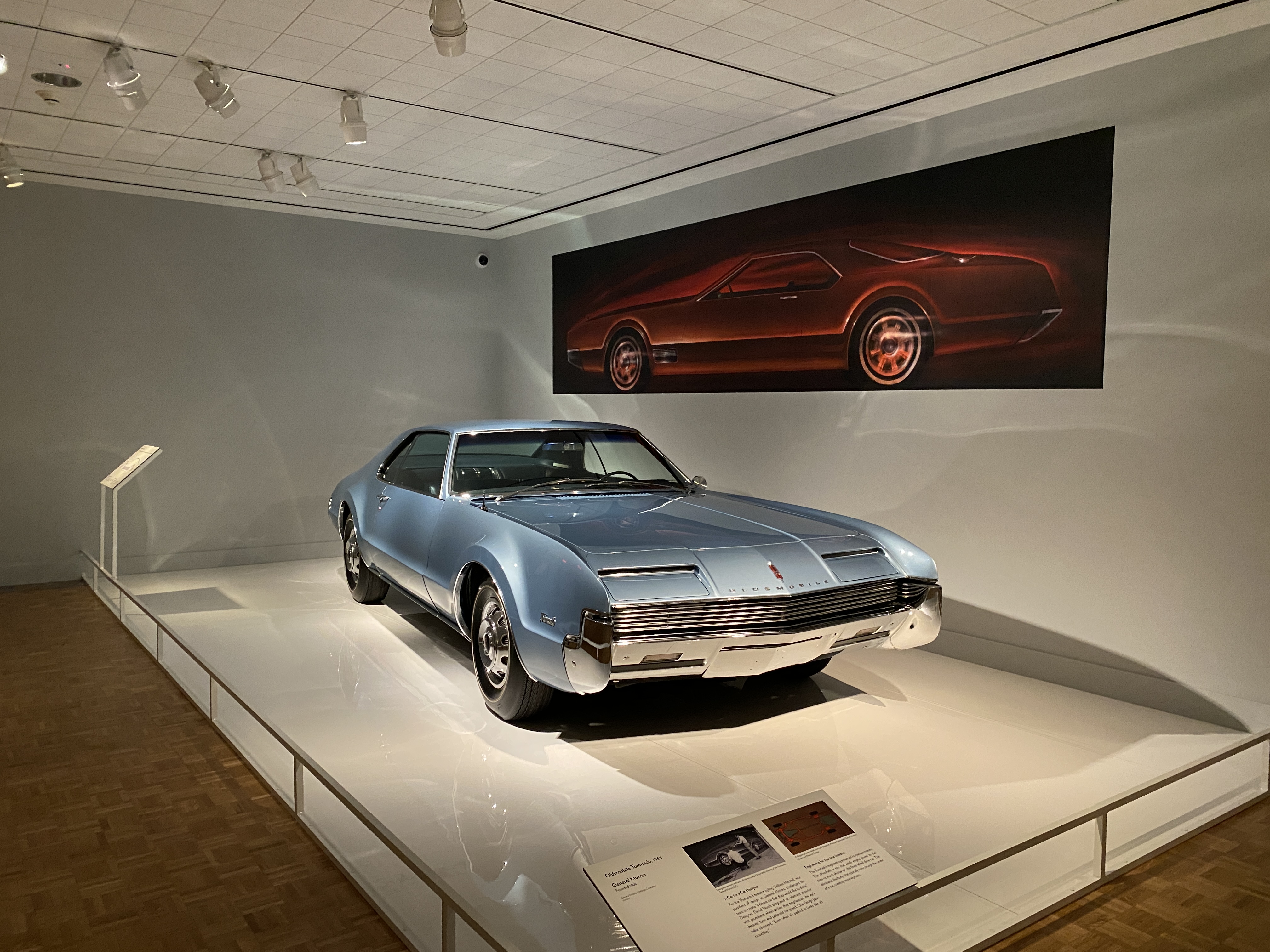 The Detroit Institute of Arts (DIA) has acquired an extravagant array of automobiles and artwork for a unique exhibition.

“Detroit Style: Car Design in the Motor City 1950-2020” is located on the north end of the second floor of the museum in a special exhibitions gallery. The exhibition was curated by Ben Colman, the Associate Curator for American Art at the DIA. During a video introducing the exhibit, Colman explains, “For this exhibit we brought twelve cars, Coupes and Sedans, into the museum’s galleries.” Colman continues, “All of them were made in Detroit’s companies (Ford, General Motors, and Chrysler) during that time period, and we’ve reunited them with a selection of designer drawings sketched in studios around the city.”

The exhibit snakes through multiple rooms of the museum, each room representing a different decade. Beginning with the 1950s, three unusual vehicles are showcased. Among them is a 1951 General Motors LeSabre show car, which as Colman explains, “helped to pioneer the style that defined the 1950s in Detroit studios.” Colman adds, “Designers looked to the sky, and this car adopts a number of features from jet planes.”

The 1960s shows off a Corvette Stingray Racer. Colman explains, “The General Motors Stingray Racer was completed in 1959 in a secret studio. Its low proportions and sharp angular features capture the rebellious energy and attitudes of designers making cars for youthful drivers in the 1960s. It inspired a generation of Corvettes.”

“Muscle cars” and “pony cars” were what defined the 1970s era. “The genre ‘pony car’ takes its name from Ford’s Mustang,” Colman said. Two of these stunning vehicles are found in the 1970s gallery, one of which is a red 1970 Plymouth Barracuda from Chrysler. The Barracuda is “an icon of American style, American car attitude,” Colman believes. “These cars were introduced in the 1970s and priced for young middle class buyers who dreamed of the open road, who dreamed of speeding down the highway.”

The middle of the exhibit, the decade of the 1980s, has the Ford Probe on display. Colman said, in the 1980s, “designers used every tool they had to make cars that did more with less.” This can be seen on the 1983 Ford Probe 4, which “broke every record for wind efficiency when it debuted.” The Probe 4 has numerous oddities about it, like covers over the wheel wells, all of which were “made for aerodynamic efficiency.”

The automobile being shown for the 1990s is a sleek Chrysler Chronos, which was based off of the 1953 Chrysler D’Elegance. “It expands the proportions and simplifies details, so we know it’s a modern car,” Colman said. Two Ford GT’s are the showstoppers as the exhibition ends with the 2000 and 2010 eras. “The 2017 Ford GT supercar reimagines the past,” Colman said. “Some elements are inspired by the 1966 GT 40 Mk. Others, like the radical buttresses on the rear wheels, looked straight to the future. The designers at Ford were inspired by the fantasies of speed and the dreams of race car driving.”

These cars, among others, and the drawings, paintings, and sculptures that surround them, make up a beautiful and fascinating exhibition. Curator Ben Colman wants patrons to enjoy his exhibition, which took years to finalize. “I hope when people come to the exhibit they love these cars as much as I do,” Colman said. “I also hope that they step back and think about how designers create their form. Designers are storytellers, they create fantasies. They inspire us to imagine where a car will take us. I think very often that we take the forms of cars for granted. I hope with this project that we can offer a more focused look at the artistry and experimentation that happens in the design studio.”

“Detroit Style: Car Design in the Motor City 1950-2020” exhibit will be open through Jan. 9. For more information, visit www.dia.org/detroitstyle.