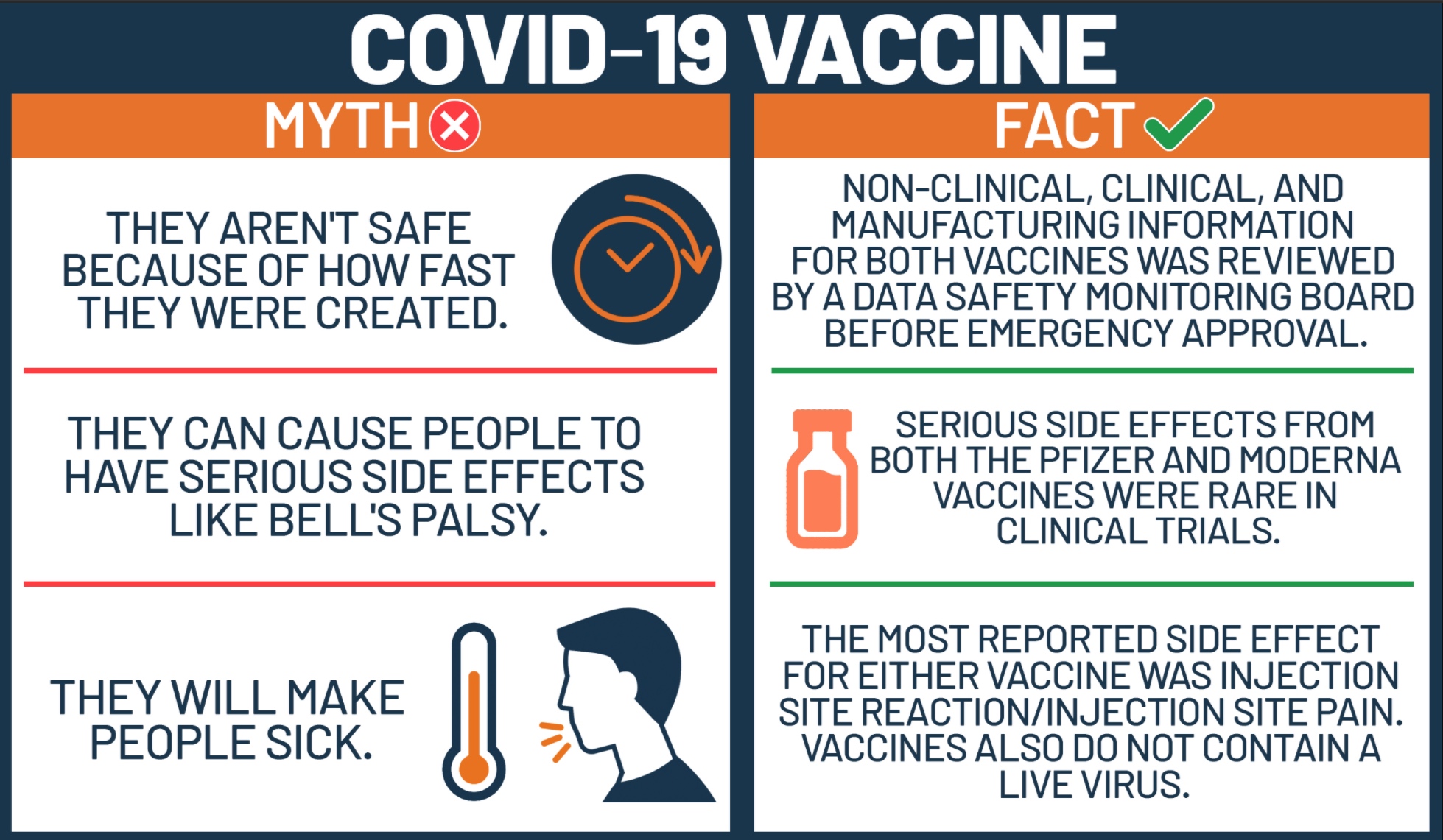 Since the outbreak in March 2020, pharmaceutical companies, scientists, and researchers have been working to develop a vaccine to prevent further spread of the coronavirus. Meanwhile, many cities and even entire countries were on lock down in hope of slowing down the spread of the virus. Specific protocols, such as staying 6 feet apart from each other and wearing masks in public, were implemented and mandatory. Additionally, people have been waiting for the World Health Organization (WHO) to announce the “working” vaccine. However, since the beginning of vaccine development, myths and rumors about the vaccine seem to be spreading just as fast as the virus itself. Now, with President Biden’s promise to roll out vaccine doses at a record pace, scientific experts have been working to highlight the facts about the safety and efficacy of the vaccines to try to combat misinformation and public mistrust.

According to Henry Ford Health System, some of the most popular myths are, “The vaccines aren’t safe because they were developed quickly,” “You can get COVID-19 from the vaccines,” and “The COVID-19 vaccines will alter your DNA.” In order to debunk these myths, we must understand how mRNA vaccines work. This understanding begins with a clarification of the abbreviations and terminology associated with the vaccine and the virus it is trying to combat. Coronavirus is the family name to which its members include SARS-CoV-1, MERS-CoV, and SARS-CoV-2. COVID-19 is the infectious disease that is caused by the virus SARS-CoV-2. mRNA stands for messenger ribonucleic acid and is used naturally by one’s body for protein synthesis.

But what exactly is an mRNA vaccine? According to Dr. D. Todd Whitaker, Henry Ford College organic chemistry lecture and laboratory instructor, “These vaccines are not a slightly modified form of the actual virus, as vaccines have typically been in the past, but rather a segment of ribonucleic acid (RNA) that codes for a protein that is found on the outside of the actual virus – a portion called the spike protein.” Regarding current vaccine technology, Whitaker states “Developments in science have led us to a new point in history where we can now assemble segments of RNA ourselves from scratch in the lab. These lab molecules will have the exact sequence of RNA monomers that we dictate in the proper order and, after they are made, they will fold into the same shape as an identical RNA molecule made in nature.” In short, what mRNA vaccines do is utilize this role that mRNA plays in protein synthesis to instruct the body’s cells on how to create their own “coronavirus fighting proteins.” This means that the body of a vaccinated individual is equipped with a new set of tools. “Your immune system creates cells that fit that [SARS-CoV-2] protein and, by attaching to it, block COVID from entering your cells the next time that protein is found floating around,” adds Dr. Whitaker.

Henry Ford College biology professor Linda Brandt uses an analogy to explain how the mRNA vaccines work. She states, “Put simply, imagine a recipe book that has all the recipes that you ever make. (That is like your DNA.) The book is on a bookshelf. (That is like your cell’s nucleus.) You could take a photograph of a particular recipe. It might not be identical – it could be a black and white photo of a recipe written in blue. In the old days it could be a photographic negative. But it has all the same information as the original recipe. (That is like the mRNA.) You then use that recipe in the kitchen to make your specific treat. (The kitchen is like the ribosome in the living cell – human or otherwise - where the mRNA code is used to make a specific protein.) After you finish cooking, you might discard the photo of the recipe. (The mRNA is very unstable and short-lived, and degrades quickly in the cell after use.) That protein that is produced is the spike protein of the virus, and the mRNA cannot make anything else.” Dr. Whitaker adds that this process is “recycling at its best.”

Contrary to what some claim, mRNA based vaccines such as those developed by Pfizer and Moderna aren’t necessarily any less safe than conventional vaccines. Dr. Jolie Stepaniak, HFC biology professor states, “Conventional vaccines contain either a live weakened ("attenuated") microbe, a killed microbe, or a part of a microbe, specifically a protein (called "subunit" vaccines).” Alternatively, mRNA vaccines are vaccines that do not contain whole microbes. She highlights how these types of vaccines have the potential to be the safest, because “it is impossible for these vaccines to cause the disease (because they don't contain the whole microbe).” In addition, mRNA vaccines have been researched for decades as Brandt states, “animal trials have been carried out for RNA vaccines against rabies, zika virus, Ebola, papilloma virus, HIV, dengue, influenza, cytomegalovirus. They have been tested extensively in mice and non-human primates including macaques.”

While it is true that the vaccine was developed quickly, enough data on the class of vaccines was collected to indicate that mRNA vaccines are safe. As to when the vaccine development started, scientists were prepared years ahead. Brandt claims, “As soon as the spike protein of SARS-CoV-2 was sequenced, scientists started to develop the COVID-19 mRNA vaccine. The spike protein is the protein that enables the virus to enter human cells, and is the one that stimulates our immune systems to mount a defense.” Furthermore, the vaccine won’t alter or harm the DNA in any possible way as the mRNA won’t last for too long in the human body due to the human cells debasing it eventually. Correspondingly, Stepaniak points out, “That mRNA doesn't have a mechanism to copy itself or alter our DNA in any way.”

One of the most popular myths circulating today is that “those that are not at risk for severe complications of COVID-19 don’t need the vaccine.” Regarding this claim, it should be noted that anyone can contract the infection and spread it to those that are more vulnerable. Therefore, once the vaccine is widely available, it is crucial that those that are eligible receive the vaccine to promote what is known as “herd immunity.” To explain this concept, Brandt states, “If a large percent of the population is immunized, even unimmunized people (for example those can’t medically get the vaccine) would be protected because the chain of transmission would be broken, and so the virus would not spread.” It is also recommended by the Centers for Disease Control and Prevention that those that have already had COVID-19 and recovered still need to get vaccinated. Stepaniak explains that this is because “there is limited data on the immunity that people have after recovering from Covid-19, so it's hard to know if they will be protected from being infected again. The vaccine can help boost their immunological memory to the virus.” For up-to-date information on the myths and facts regarding the COVID-19 vaccine, visit https://www.cdc.gov/coronavirus/2019-ncov/vaccines/facts.html.