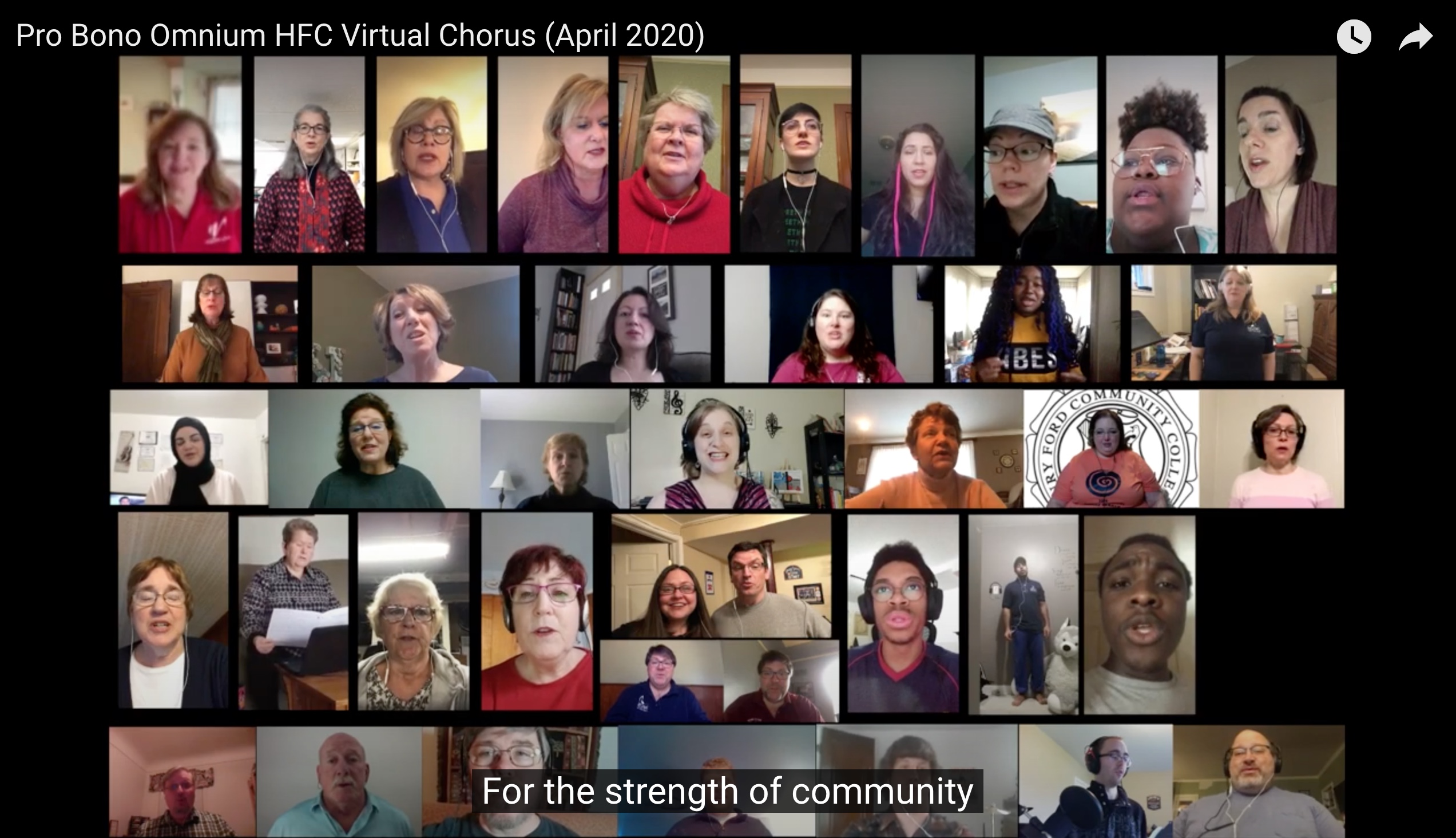 Like many other music programs throughout the country, Henry Ford College’s choirs have been forced to move completely online because of the coronavirus pandemic. Vocal music director at HFC Kevin Dewey has had the challenge of having to not only find a way to move his classes online, but also of having to do it alone. However, with the publication of HFC’s Chorus’s “Pro Bono Omnium” on April 24, 2020, he is maintaining the group presence.

HFC’s Chorus still meets under Dewey’s direction through Zoom. The process of creating the arrangement for the chorus begins with him sending a recording of himself singing the piece to the students of the choir. They then record themselves singing the song while listening to his piece as a reference through headphones. After sending their copy back through their Hawkmail account, Dewey loads the audio files into Pro Tools, an audio editing program, and stacks them up so they all play over top of each other. The result is a close representation of the effect one would expect from a chorus concert.

Dewey says that the biggest challenge from a performance standpoint that comes from having his rehearsals online is not being able to hear everyone singing live at the same time. “We can’t do that in a Zoom [call] because there’s a time delay… You can’t have the choir singing on Zoom together, that doesn’t work.” He says that assessing his students has also proven difficult, as he mostly grades his vocal groups through participation. “If you come to class, you have your video turned on, you participate, you offer input… as long as they actively participate, that’s how they get their grade. It’s a little less focused on how well you do on a test.”

It seems that getting enough people into the chorus has proven difficult as well. “Unfortunately, last semester and this semester because of the coronavirus pandemic, enrollment has gone down.” He makes a note that most singers would rather sing in a group setting, but he still held hope that the virtual format would attract “a certain kind of singer.” He says that the virtual format allows some students to expand their range, singing several parts to the same piece. “I have a couple students who send in about a dozen recordings for each song.”

Besides the pandemic, in his 26 years at the college, many things have changed, but one of the hardest has been having to be the only full-time faculty in his department. “When I came here, we had three full-time music people… over the last half dozen, ten years, those people have all retired and the college has not replaced them… and so I am now the only full-time person there.” Overall, he says he misses being able to be in a department with other professionals who share the same passion. “One of the things that is lost is the collegiality," Dewey says, "being there all day with a couple other professionals who you can share things with.”

As was the case with “Pro Bono Omnium,” Dewey will often load choir performances on his YouTube channel. He mentions that “the real issue you have to watch out for is licenses.” Dewey continues, “Almost everything that I do with the college that I want to put up on there, I pick something that’s a classic, public domain song.” When it comes to his own arrangements, Dewey says it’s fair game. “If it’s my composition, or my arrangement of a public domain song, then there’s no licenses to be paid to anybody.”

For the future, Dewey says that the music department has just received a grant that allows them to have cordless microphones for their sound system, which will allow for an easier setup and take down. The mixer from the sound system is also being replaced by an iPad, where a program will run the mix for them. “It’ll just make it smoother, easier, and easier to facilitate.” He also says that he wants to set up a YouTube channel specifically for the music groups at HFC, rather than posting videos through his personal account.

With coronavirus vaccination efforts ramping up across the country, members of the World Health Organization estimate that beginning the transition back to normal at the beginning of next year is not unrealistic. Once they do, the music groups of Henry Ford, such as the chorus and the jazz vocal group, Blue Fusion, will be able to resume their in-person rehearsals. Until then however, anyone who is interested in attending rehearsals for the HFC Chorus should email Kevin Dewey at KDewey@hfcc.edu.