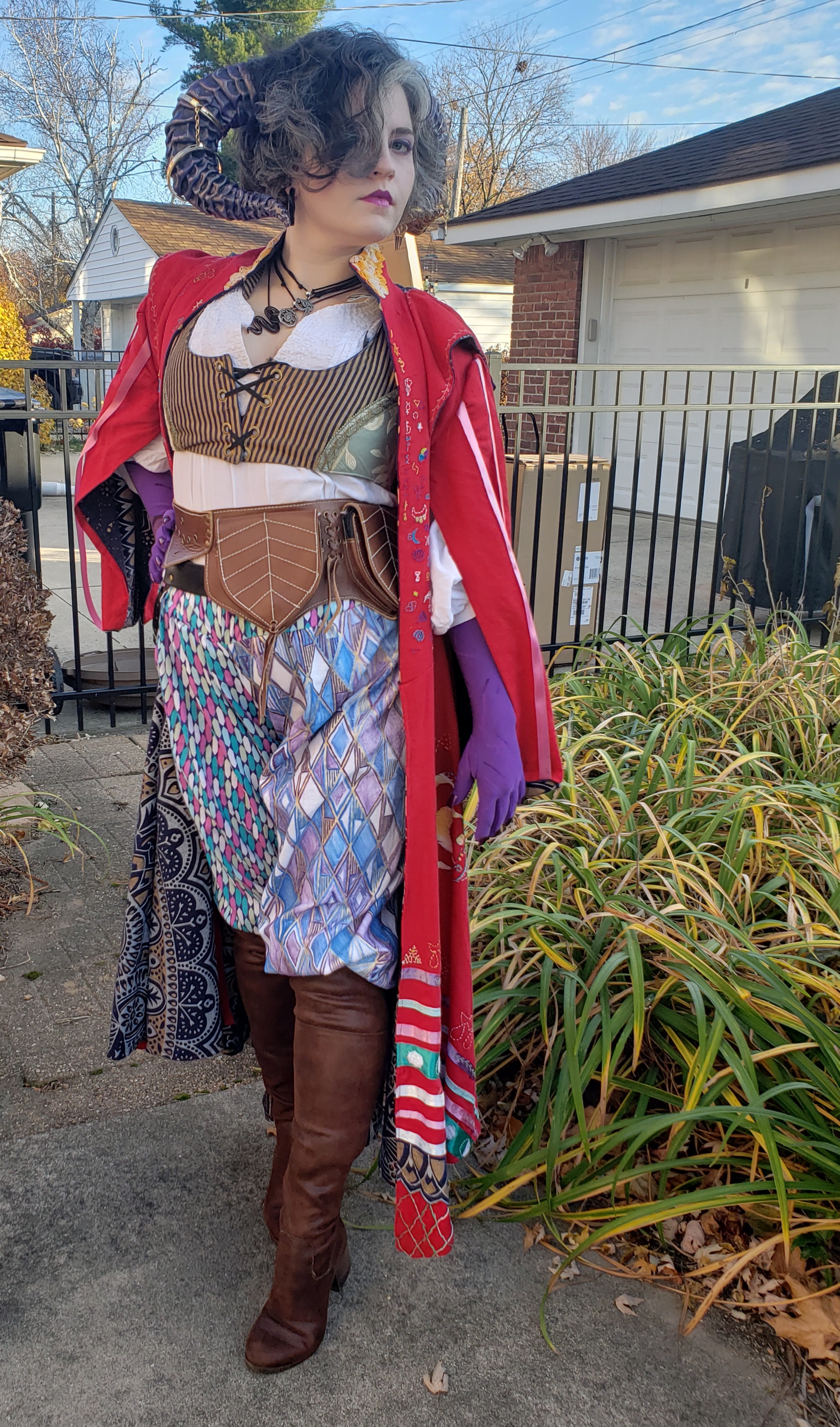 I am a cosplayer and have been for a few years now. This was going to be the year that I was looking forward to trying my hand at some bigger crafting projects. Earlier cosplays had been either simple store-bought items, like shirts and pants, slightly altered to do characters like Rohan Kishibe from JoJo’s Bizarre Adventures Diamond is Unbreakable; or a hand sewn dress version of the beloved character of Figment from Epcot in Disney World. But this year I was going to be a little more extreme. I began crafting a cosplay of a Tiefling from the Dungeons and Dragons based internet show Critical Role, one Mollymauk Tealeaf.

For a cosplay like this it would be a large undertaking of time, effort, and of financial expenses. I would be making a trench coat, fully embroidered; a pair of pants; horns; a tail; and a pair of gloves, I would do myself the favor of buying or finding around my house the shirt, shoes, belts, and jewelry for the most part. However, this would be my first time making most of these items, and working with material such as EVA foam.

I began by doing what would take the longest by sewing and embroidering the correct spots of the coat to get it to look similar, yet unique to myself. I used a red linen and two blue and gold cotton tapestries from a local shop to create the base coat and lining and that covered the outside with the embroidery. Next I moved onto the pants, which were two toned and different patterned on each leg. On one leg I used a white and gold diamond patterned fabric and on the other a stripped pattern of purples, blues and greens. With the white fabric I choose to dye the fabric to have a purple and blue multi diamond fabric. I used a pattern that I bought from a sewing shop, which gave the feel of the pants that I wanted. After finishing sewing the two items I decided to move on to the hardest part, and I’m least experienced with, EVA foam horns.

Since I don’t have much experience with the use of EVA foam, I relied on the use of professional, and nonprofessional, cosplayer’s videos on how to use the product. As well as using some of their own patterns. I also took time to edit them and make them so that they looked unique to my taste and styling of the character. But this section of work has proven to be one of the most dangerous parts of cosplaying. Now this might seem overly exaggerated but EVA is toxic when heated; contact glue to put pieces together is harmful to skin and if you breath in around it; I used a popular sealant on the props before painting them, PlastiDip, with also has toxic fumes if you breath around it and if you get it on your skin. So I made sure to take every precaution and worked outside in well ventilated areas, making sure to use a respirator and gloves whenever I was unsure of a material.

I got a pattern from a popular cosplayer/cosplay prop maker, KamuiCosplay, to craft a pair of foam ram’s horns, after I cut them out with a utility knife, and I glued the pieces together with contact cement. Before I did anything else, I took a dermal and sanded and smoothed out some of the rougher seam lines and any ugly edges. I then took a new popular product in cosplay prop making, foam clay, to sculpt up the horns from a flat surface to a more raised natural looking horn. After letting this cure for forty-eight hours, I made a quick spray booth out of a cardboard box and an old hanger, took it outside and sprayed on four layers of PlastiDip sealant. I gave it a night to cure over, just to make sure any of the layers were dry. I then dry brushed a purple flexible acrylic paint, then brushed over a highlight of color shifting purple to gold/silver metallic acrylic paint. I did two coats of each before applying a black into some of the nooks and crannies. After punching four holes, two in each horn, I threaded a purple dyed piece of elastic through to hold the horns in place. Then it was time to decorate them with bits and bobbles to make them have the feel of the character, luckily a lot of the things I was putting on were things I already had in my jewelry collection. But I did get a good and copper wire to wrap around the tip of one of them to mimic what was on the characters. And I attached a chain with some hanging acrylic spikes to give it some more dimension, and finally attached a moon to the end of one.

The final two pieces to make for the costume were a tail and a pair of gloves.

To craft the tail, I found some old flexible metal braided plumbing tubing in my basement, and another piece of foam, cut out in the shape of a “devils” tail. I covered each of these in a few layers of purple fabric I had laying around and sewed them together. I then attached the whole tail to a belt that I bought for the costume, with a piece of wire. Next I bought a pair of purple gloves and took the same type of fabric dyes I used on the pants to make a snake tattoo and some scarification on them following what was similar to what the character has on. I went out and got some press on nails, which I glued onto the gloves and applied a purple nail polish to them. The only thing left to do was make-up and putting everything on.

Applying the make-up was maybe the hardest, and possibly the most frustrating thing to do. Originally, I was going to apply a purple grease paint to my skin, and then do a beauty make-up over it with a drawn-on peacock tattoo going up my neck, however I had to change directions. The reason for this is the fact that I have very sensitive skin, so when I tried to apply the grease paint to my skin to get that purple Tiefling look, I found that I wasn’t able to actually wear it without having a reaction to it. So instead I did a purple eye and a purple lip.

This year has challenged all of us. The pandemic has closed down things we all were looking forward to. However, if there’s one thing that conventions have done, it’s to try and bring themselves to the people, to give us an escape from how this year has gone. And while there won’t be a convention in person for a while now, this year has given cosplayers a chance to expand their creative escape. It has allowed us to try new techniques that we may not have had a chance to before the down time. It has given us a moment to prep bigger and larger cosplays, to be ready for whenever the next convention will happen. So, while most conventions are happening online, it is almost guaranteed that they’ll be back, and when they are, they’ll be bigger and better than they’ve ever been before.