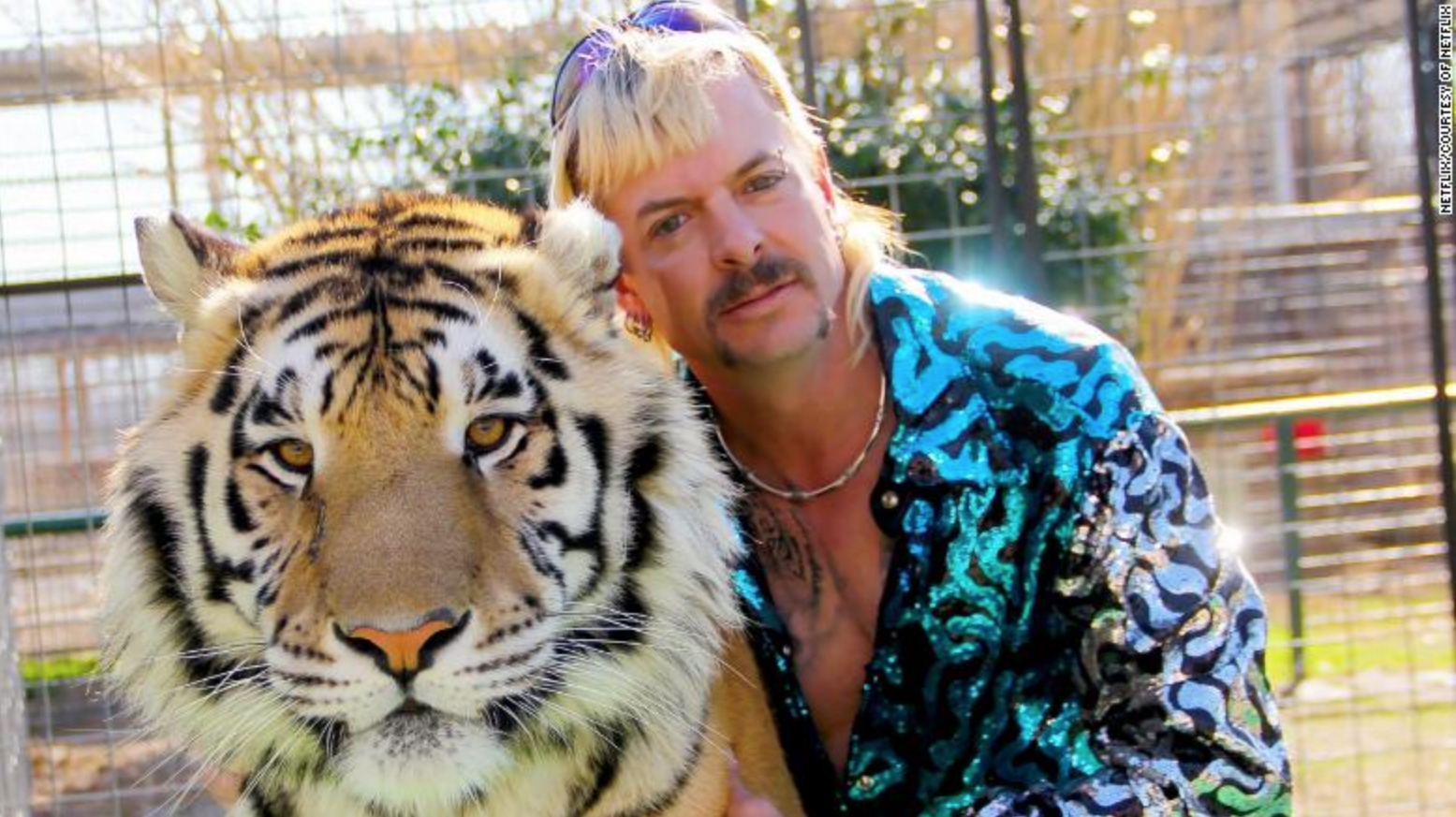 Like many other quarantined Americans, I’ve been searching Netflix for new entertainment to occupy this grim period of social isolation. One day, several weeks ago, “Tiger King: Murder, Mayhem, and Madness,” the service’s newest original documentary series, appeared on my screen, proudly displaying it’s “#1 in the U.S.” bookmark. I pressed play without reading past the word “Tiger.” It was the best decision I’ve ever made.

In a matter of hours, I was taken on a mythical journey through the life and legend of Joseph Schreibvogel, stage name “Joe Exotic,” former owner of the Greater Wynnewood Exotic Animal Park in Wynnewood, Oklahoma. Home to over 200 big cats, his roadside zoo draws tourists from all over the country to interact with baby tiger cubs. “I can assure you you’re going to get closer to tigers and lions here than you would anywhere in the world,” Joe promised. “As a matter of fact, you’re gonna get so close I can almost promise some of you will be urinated on.” It seemed innocent, and perhaps it did start that way, but the documentary revealed the ugly truth behind owning tigers, “animal rights,” and Joe Exotic, a sad yet grossly entertaining reality.

Beginning the series, a CBS news report reveals that “there are more captive tigers in the United States today than there are in the wild throughout the world,” with a good portion residing at the Wynnewood Zoo. To assume that the staff are licensed and well trained is wishful thinking, as some employees found the job off Craigslist, including headkeeper Erik Cowie.

”The people who worked for Joe were misfits, and they were a family,” said Rick Kirkham, producer of Joe Exotic TV. “It was a place where all these misfits could come together and be with the king of misfits,” a.k.a. Joe Exotic. Dr. Bhagavan “Doc” Antle, proud owner of Myrtle Beach Safari or T.I.G.E.R.S, the Institute for Greater Endangered and Rare Species, describes Joe as a “completely insane, gay, gun-toting, drug addict fanatic.” But, as the series readily portrays, “big cat people” are a different breed, pun intended.

The seven episode documentary takes you on a rollercoaster that you didn’t know existed, with a suspense that escalates by the sentence. Though the story follows the trials and tribulations of Joe Exotic, it highlights the equal craziness of those around him, including his arch nemesis Carole Baskin, owner of Big Cat Rescue, the largest accredited sanctuary for abused and abandoned cats. As with everything else in the show, nothing is what it seems, as the third episode uncovers Carole’s questionable past and potential involvement in the disappearance of her second husband, Don Lewis. Their rivalry is a result of fundamental disagreements regarding the captivity of big cats. Unfortunately, Carole’s dark past casts doubt upon her intentions, especially when comparing her facility to that of the Greater Wynnewood Zoo, where the resources are nearly identical.

“If Joe had one enemy,” Kirkham willingly admitted, “it was Carole Baskin.” During his internet show, which Kirkham produced, he slandered her name through brutal, often unbelievable acts of violence. In one instance, he put Carole’s face on the head of a blow up doll and shot it while filming. The constant battle of which cage tigers should spend their lives in continues into the fifth episode, where things get even weirder.

Throughout much of the documentary, we see, as Kirkham describes, “the good, the bad, and the ugly” of Joe Exotic. Troubles arise when one of his husbands (he had two) accidently commits suicide after being trapped in the zoo for years. He remarried two months later to a man 20 years his junior. He stuck a hand in politics, running for Governor of Oklahoma and, in 2016, President of the United States. An investor by the name of Jeff Lowe steals the enterprise by stealthily offering himself to save the zoo, which had been failing for numerous reasons. As you might expect, things backfire, and by the end of the series, the two are sworn enemies. The documentary concludes by showing Joe in prison after being found guilty of a murder for hire charge, with Carole Baskin as the victim.

“Tiger King has everything,” a circulating meme reads, “tigers, lions, murder, alligator arson, mullets, expired Walmart meat, a zoo-based sex cult, and country songs intertwining tigers and gay love.” This hardly scratches the surface. There are rumors that a final episode will be added to conclude the series, though the story of Joe Exotic is far from over. “I haven’t heard an ending to this court case yet,” said former zoo manager John Reinke.

If you’re looking for something to occupy your time in quarantine, it’s unlikely that you’ll find something more entertaining than “Tiger King.” It is currently streaming on Netflix.