Race for the Oval Office 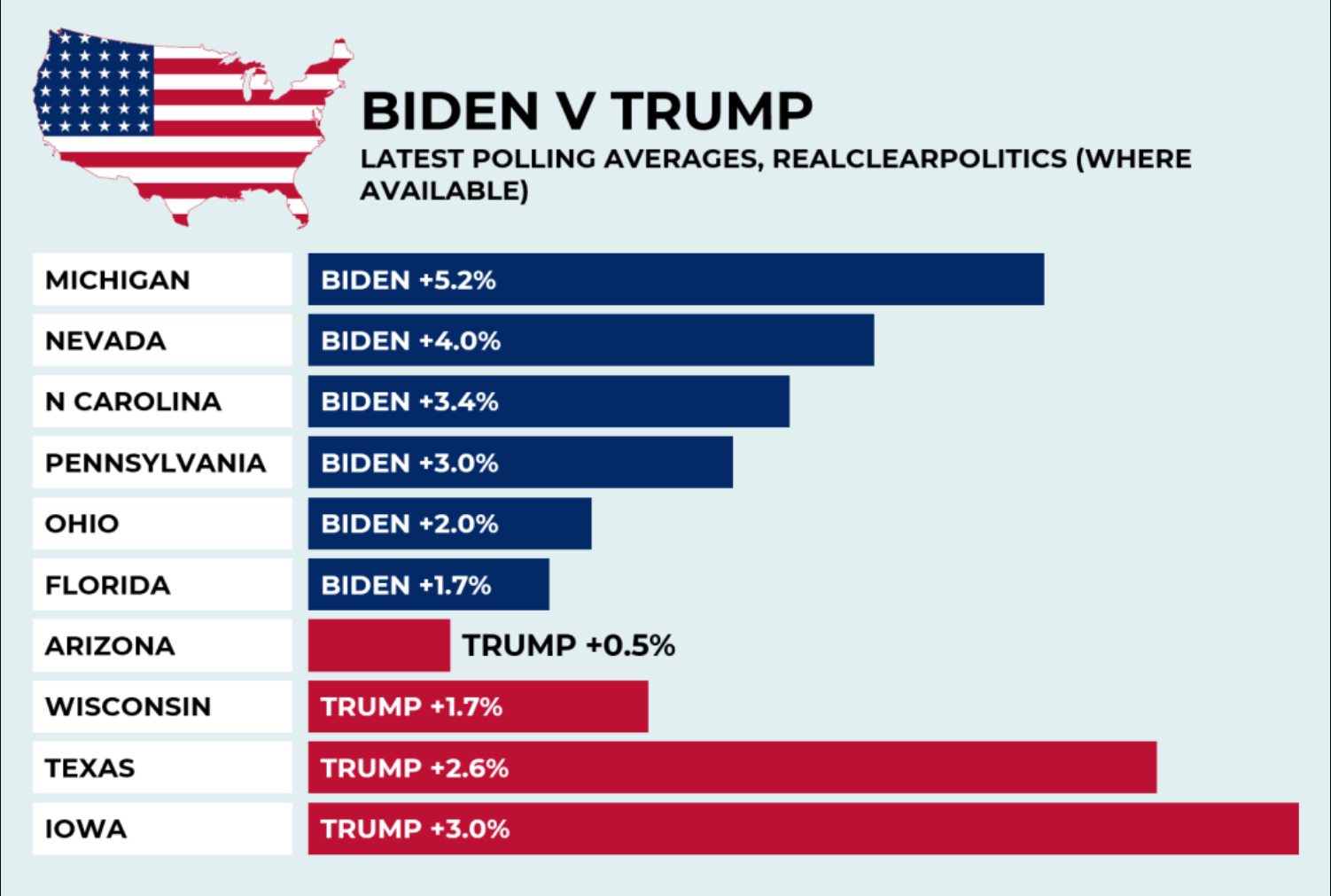 With just three candidates in the GOP race, it was clear from the very beginning that President Donald Trump would secure the Republican nomination. In the Democratic race, however, a pool that started with 25 candidates came down to a two-horse race between former Vice President Joe Biden and Senator Bernie Sanders. Following a series of losses to Biden in some key states, on April 8, Sanders ended his campaign, subsequently making Biden the presumptive Democratic candidate to face Trump in November.

Under extraordinary circumstances, the stage is set and the two septuagenarians with dramatically different leadership styles and approaches to the issues that matter most to the electorate will battle it out.

Trump, At 73, comes into the race as the incumbent with a massive financial advantage in campaign funding, maverick antics, and a tenacity to win at any cost; whereas Biden, at 77, has the most experience in government for a nominee, having spent most of his adult life as an elected official, and serving as Vice President for two terms under President Obama.As has been the case with past elections, voter choice and party affiliation may very well be synonymous in the November poll. However, voting may also strongly correlate with the candidate’s ideological consistency and policy position on key issues.

With a global pandemic wreaking havoc across the nation and world and a severe economic downturn looming, the economy and healthcare seem to be the top two key issues that just might determine the outcome of the election. Trump and Biden have different priorities on both.

According to Politico, during Trump’s first term, the U.S economy has experienced its longest expansion since the end of the last recession in 2009. The country has registered steady growth in the GDP and a decrease in unemployment, and the U.S. stock market remained strong up until the pandemic. A campaign tool Trump will effectively use to his advantage for middle and upper income voters.

Biden’s position on the economy is that the economic gains of the past few years are not being shared widely enough. Biden is pushing for a shift of resources towards lower income Americans with solutions like increasing the federal minimum wage to $15, providing paid leave for workers, strengthening unions, diminishing the power of big banks, as well as creating affordable housing. Biden’s policies will sit well with lower-income Americans.

On health care, Biden will point out that American families, farmers and small business owners, continue to face skyrocketing health insurance costs, including high deductibles and copays. Since taking office, Trump has been bent on repealing and replacing Obama’s Affordable Care Act. Trump believes that replacing Obamacare will force insurance companies to compete for their customers with lower costs and higher quality services. Biden on the other hand is pushing for helping the uninsured. Biden would like to see health reforms being made slowly and in small steps, starting by improving on the Affordable Care Act and then by potentially adding a public option.

While it is still too early yet to call who will take the day based on how divided the nation is, recent polls place Biden at a slight advantage over Trump. According to Real Clear Politics, Biden is currently ahead of Trump in the key swing states of Arizona, Florida, Michigan, North Carolina, Pennsylvania and Wisconsin, states which Trump took in the 2016 presidential race, and which will be critical to winning the Electoral College.