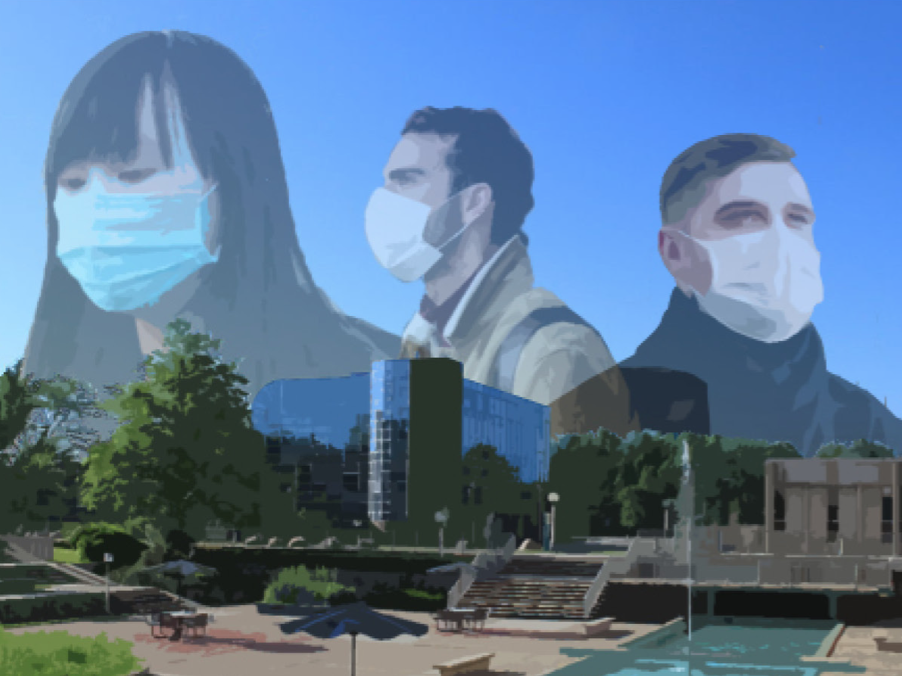 On March 23, Michigan Governor Gretchen Whitmer signed an executive order calling for Michigan businesses and residents to suspend in-person nonessential operations and stay home unless the need was dire and life-sustaining. At the moment of this writing, it has been 22 days since that order has taken effect state-wide. Recently, Gov. Whitmer extended the duration of this order to April 30.

Along with several other local universities and colleges, Henry Ford College adjusted its operations to be in compliance with the governor’s orders. After extending the duration of the spring break, on-campus courses were moved to remote, online courses though many have been postponed as well. This information can be found on HFC’s website.
“The COVID-19 situation evolved rapidly. A multidisciplinary team with members across the College was formed early on. The initial focus was keeping students, faculty and staff safe while educating the HFC community about COVID-19 and CDC guidelines to prevent the spread of the virus. As the number of COVID-19 cases increased, it became clear that the COVID-19 pandemic would have a significant effect on operations at every level of the College,” said School of Health and Human Services Dean Susan Shunkwiler. “Before the Governor’s stay at home order, the College implemented policies so students, faculty or staff affected by COVID-19 could stay home without fear of punitive action. Many courses were transitioned to remote learning, large gatherings were cancelled to stop potential for spread of the virus, and academic, financial policies and procedures and support services were reviewed. With Governor Whitmer’s ‘stay at home’ executive order came widespread operational changes.”

In fact, HFC responded to the drastic demand of medical supplies when the outbreak affected local hospitals with a duty of care and cooperation. “When local hospitals put out the call for supplies, our amazing team boxed up medical supplies to donate to local hospitals. We donated personal protective equipment packs, shoe covers, head covers, surgical gowns, N95 masks, sterile and not-sterile gloves. We also provided 5 ventilators for use,” said Shunkwiler.

The impact caused by these operational changes, as well as the non-academic changes, has been noticeable to students and faculty alike. Dean Shunkwiler’s daily routine has been affected, as she notes, “I am now working remotely for the first time in my life. As a nurse, I never did. I am a social person, so I miss daily interactions with my teammates. Working from home has presented some problems in that regard, but also opportunities. I am using zoom and teams for meetings and learning about virtual simulation. I am so impressed by the innovation, energy, resilience and ingenuity of our HFC administrators, faculty, staff and students.”

This change in pace and how one interacts socially has been felt and encountered also by instructors. “I spend most of my time during weekdays online trying to connect with my students either by phone, Zoom or email. Rest of the time goes in preparing for the class. I am very proud of my students who are trying very hard to learn in this challenging environment. It is their willingness to learn that makes this challenge bearable,” said Dr. Rama Chidambaram, full time faculty member of the mathematics department.

This effect is similarly experienced by students who no longer commute to school and have been holed up at home adjusting to the significant difference in ambience. “My life really changed when all of this happened, I wasn’t prepared for it like everyone else. I used to stay in HFC for more than 10 hours a day,” said electrical/computer engineering major Yazan Alheresh. “I’ve not taken an online class before so it was a really difficult transition for me,” said Alheresh.

Some students have discovered the discipline needed to adapt to remote learning. As bioengineering major Hadi Jaffal said, “It was challenging at first. They threw all these new ways for us to learn. It’s hard to keep track of your email and all the other resources you are required to keep checking.” Jaffal went to say, “For someone who is taking three classes, all these resources add up.” Jaffal recognizes, “That’s when time management comes in. You have to make your own schedule and follow through.”

For students with familial priorities, the effect is unique as local K-12 schools have experienced closures as well, so the concomitance of course load and child rearing is more immediate than before. “As a parent, it’s harder,” said accounting major Bianca Vizitiu, “I have more to do at once. Taking care of the kids and, at the same time, doing the same amount of work as before but I also have more time to go outside, or do exercise.”

Certain courses offered to health career students who have practicums and nursing students present a challenge if their instruction is made remote. “Luckily, some of our health programs have already completed a significant amount of practicum hours, so students can meet the course objectives through distance learning. In other cases, students will have to finish their practicums later,” said Dean Shunkwiler, “The Board of Nursing (BON) administrative rules state that simulation lab hours shall be limited to no more than 50 percent for each clinical course. On March 28, the BON and the Licensing and Regulatory Affairs (LARA) informed us that RN and PN programs will be allowed to conduct up to 100 percent of clinical experience hours in each course using virtual simulations and/or clinically related online activities during the current declared state of emergency and the remainder of 2020.”

The actions that institutions have taken all comes as an attempt to “flatten the curve.” This is a theoretical tool used by public health experts, such as epidemiologists, to project the number of people who are likely to contract COVID-19. The steeper the slope tends upward the more likely the number of incoming patients overwhelms the capacity of the health care system to care for the sick. So roughly speaking, it represents the rate of infections being contracted, and thus, the expected work exerted on the health care system which is limited in resources. As Dean Shunkwiler notes, “The same number of people will be infected, but at a slower rate.” She continues explaining that flattening the curve means “essentially stretching out cases over a longer period.” This would allow the healthcare system to be less overwhelmed by the outbreak as well as allow their resources to be allocated such that more time and space can go to “vaccine development and disease treatment.”

At the moment of drafting this article, John Hopkins University & Medicine have reported in the U.S. alone that there were approximately half a million cases confirmed, 23,000 deaths, 44,000 recoveries, 3 million tested individuals, and nearly 100,000 patients hospitalized for the novel virus. Globally, the picture is similar with nearly 2 million confirmed cases, 120,00 deaths and 450,000 recoveries. This rapid growth of infections in the past months is partially a result of the virus being transmittable when the person carrying it is presymptomatic or asymptomatic. The Dean of Medicine at the University of Hong Kong estimated that nearly half of the cases transmitted were presymptomatic. This is one reason alone as to why social distancing and non-health care or nonessential workers have been advised or ordered to stay home.

In early March, researchers at the University of Melbourne had successfully identified how the immune system responds to the COVID-19 virus. The patient was a 47-year-old woman from Wuhan, China, who exhibited mild-to-moderate symptoms and recovered 14 days after developing symptoms. This recovery allowed researchers to isolate four types of immune cells that, once activated, fight off the virus. They found that before recovery began the same cells that appear to fight off influenza also appeared to fight off COVID-19. Eventually, this information, they hope, will assist in the development of antibodies as well as vaccines.

However, how COVID-19 attacks the immune system, and how the immune system reacts varies depending on what proteins it latches onto. Since it enters through the mouth, it has the possibility to travel to your lungs or your stomach which accounts for the diverse flu-like symptoms. Mild-to-moderate symptoms seem to be presented by those cases where the innate immune defenses prevent the virus from replicating and adapts the body’s systems to eliminate the virus. More serious-to-severe symptoms are presented by cases of immune defenses being suppressed either by deficiency from older age and pre-existing health issues or by high exposures to the viral particles. In the latter, many health professionals who have been young and healthy have contracted the virus. In more serious-to-severe cases the immune systems’ response impairs the transfer of oxygen to organs and tissues by overproducing inflammatory proteins that result in lung tissue death. As one researcher at the University of California, San Francisco notes, “The lungs fill up with fluid, and they can’t oxygenate. Or they develop widespread sepsis, can’t support their blood pressure, and die.” He goes on to emphasize how important immune defenses being suppressed propagates this result.

Flattening the curve would allow health care systems to implement more research and development of antibodies. Shunkwiler said, “Antibodies are like guards for your cells, when someone tries to get in, they release a team of white blood cells to fight them off. Scientists are looking at using antibodies from the plasma of individuals who have recovered from COVID-19 to help treat those who become ill.” Shunkwiler explained, “Vaccines prevent diseases by imitating the infection. Once the imitation infection goes away, the body is left with memory cells that fight the infection in the future.”

Finding the right antiviral or therapeutic drug, however, is far from simply a matter of time. G. Caleb Alexander, Aaron S. Kesselheim, and Thomas J. Moore discuss what should be expected and considered in the development and testing of a COVID-19 treatment in an article on STAT. They mention that “more than 100 clinical investigations focused on COVID-19 from around the world” are active and in progress but they also express concerns given the abundance of such research and development.

Amongst such considerations there is the need for clinical investigations to be internationally coordinated and not influenced by “counterproductive competition among countries with biotechnology industries.” The main point here is not to allow such notions as intellectual property to deter potential treatment of patients suffering from severe-to-serious symptoms. Additionally, drug treatments should, for the sake of public health, be evaluated independently by the FDA before administered within the healthcare system. These investigations, and similar research trials would determine “the two fundamental properties of every therapeutic drug: benefit and harm” amongst other important factors. Though the future is unclear and, perhaps even confusing, what medical experts and researchers agree is needed now more than ever is cooperation and coordination.