COVID-19: Life in a Dystopian World 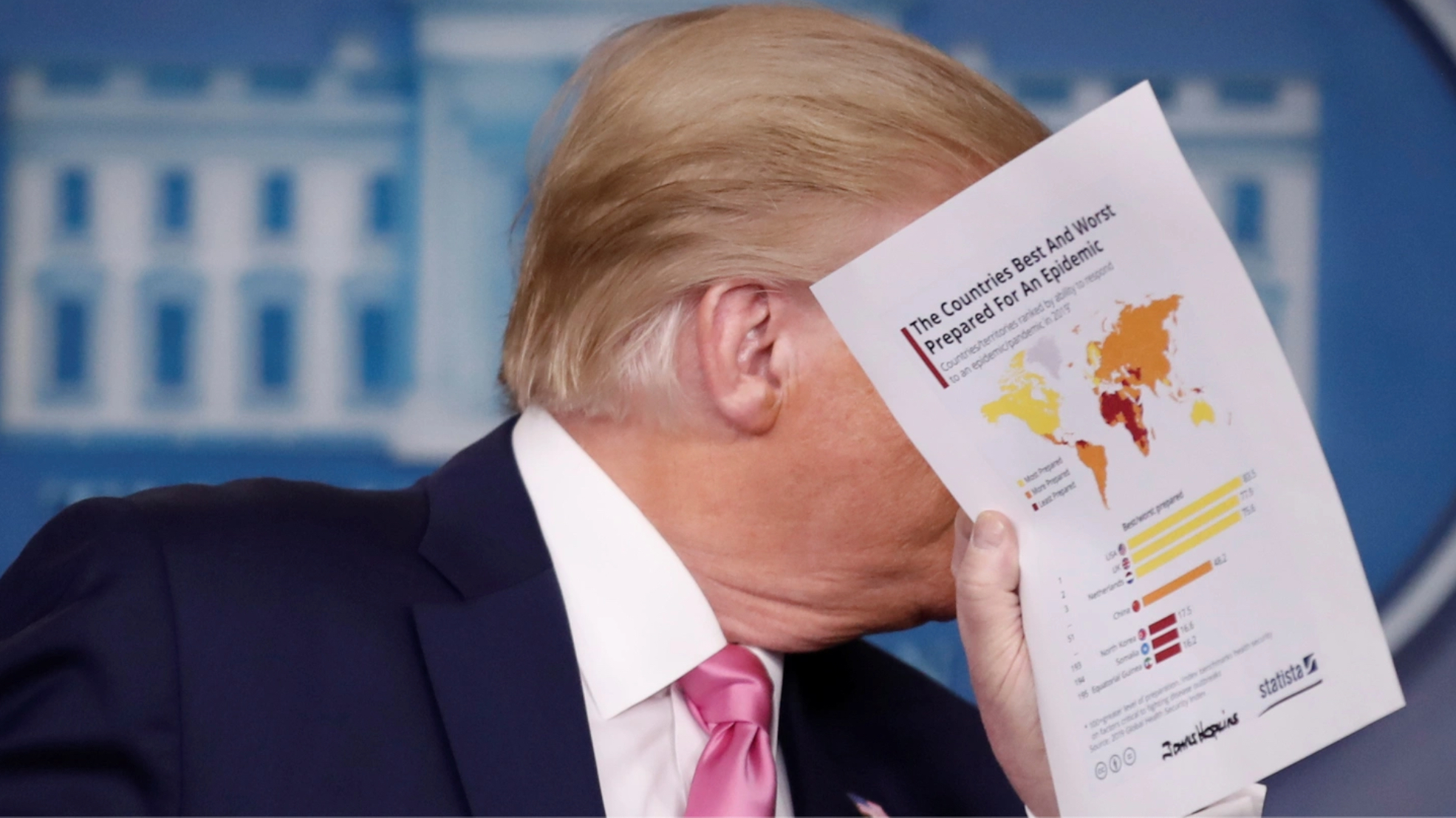 Image by Carlos Barria for Reuters

COVID-19 is a respiratory disease that can lead to severe illness and in some cases death. Older people and those with chronic health conditions are the most vulnerable and at higher risk. There is currently no approved vaccine or any antiviral treatment.

The outbreak was first reported in Wuhan, China in late 2019 spreading to thousands of cases in just a matter of weeks. The virus was traced to Wuhan’s big outdoor seafood and poultry market. Because of the very fast pace the virus transmits, the Chinese government took aggressive actions to try to contain the spread of the virus, including shutting down all transportation and suspending public gatherings. In addition, Chinese authorities isolated all infected people and strictly tracked everyone they came into contact with to test for the virus. China also dedicated a network of hospitals to test people for the virus. Yet, with all the severe cautions, 3,304 thousand people so far have been reported to have died in China, though the exact numbers need to be verified as new information becomes known. The public health officials in China had immediately informed the World Health Organization about the sudden outbreak of the virus and how rapidly it is spreading outside Wuhan.

The WHO has declared on January 30, 2020, COVID-19 to be a Public Health Emergency of International Concern. Coronaviruses are common among animals; however, the virus sometimes evolves into other forms that can infect humans. This is not the first time of a coronavirus outbreak in the world. It has happened twice since the beginning of the century. The first one happened in 2002 and was called SARS, and the second coronavirus outbreak was MERS in 2012. The coronavirus that’s happening now has been given the name COVID-19, so people can differentiate the three types of coronavirus. Although COVID-19 is less dangerous than the previous two strains of coronavirus, it spreads faster, making it harder for health officials to contain the virus and stop it.

China has warned the world from the beginning about the pandemic that’s going to happen. Unfortunately, the warning wasn’t taken very seriously, and all the recommendations China provided were not followed. The virus has spread all over the continent. As of the first of this month, 827,419 cases have been confirmed around the world and the death toll has exceeded 40,700 according to WHO statistics. While Italy has the highest death toll to date, the U.S. will soon surpass Italy if we don’t take serious precautions. As of last week, the death rate in Italy was 12,430. A noteworthy fact to keep in mind is that the number of cases of COVID-19 in the U.S. have already exceeded Italy and all other countries combined. As stated by the Washington Post, there are more than 212,000 confirmed cases in the U.S.

It’s unfortunate that such a wealthy and developed country is not prepared for a respiratory related pandemic. Arguing that no country was fully ready for such a pandemic is a valid debate. However, the U.S is one of the few countries that got the virus relatively late, so authorities had more time to prepare for it. A 2005 report released by the U.S. federal government estimated that a respiratory pandemic would require mechanical ventilators for 740,000 critically ill people. That was nearly fifteen years ago. Now that the country is facing the outbreak, it is clear that the country did not prepare given the alarming shortage of ventilators. The shortfall in hospitals has forced doctors to make excruciating decisions on who needs the device more than others.

President Trump has been very inconsistent with his responses to the pandemic. The president has been remarkably dismissive. On Feb 24, he tweeted, “The Coronavirus is very much under control in the USA.” His emphasis quickly shifted to money. “Stock Market is starting to look very good to me!” The tweet was published the same day the White House asked the Congress for $1.25 billion to help the government’s response with COVID-19. According to the New York Times, the death toll that day surpassed 2,600. On Feb 26 Trump said in one conference, “I think every aspect of our society should be prepared. I don’t think it’s going to come to that, especially with the fact that we’re going down, not up. We’re going very substantially down, not up.” This contradicted what the secretary of health and human services said earlier, which was that they expected “more cases.” These are just some of his contradictory responses from The White House. President Trump continues to write such ignorant tweets on his twitter account and not pay attention to the safety and health of all the American people.

The pandemic is a threat to the U.S economy. There are several factors to why the U. S economy will face the greatest hit than any other country. The economy mostly relies on face-to-face service industries, i.e. sport events and concerts. So, the longer the virus lasts, the closer we are to another economic crisis. In an attempt to fix the economy and help citizens out, Mr. Trump signed a historic $2 trillion stimulus plan on Friday March 27. The plan will provide direct payments for most taxpayers, expand unemployment insurance, and provide help for small businesses, and most importantly hospitals. While this will help in the short term, it is a one-time measure. How is one check going to save families from this pandemic? What about the coming months when people don’t have enough money to pay rent and buy food? How’s this one check going to replace the grief of those who lost loved ones because there wasn’t enough ventilators and medical help? Money isn’t always everything that people need. According to ABC News, the unemployment rate in the U.S. now is 4.4 percent. This rate will grow the longer the virus stays.

Additionally, the stimulus plan is definitely an unfair one. As stated by the Institute on Taxation and Economic Policy, only citizens who use Social Security Numbers will get checks. Those who use Individual Taxpayer Identification Number will be omitted. This means all undocumented immigrants who are most vulnerable in this crisis are excluded. Failing to help them not only will significantly impact the economy in a negative way, but it will be fatal to many of them. Those undocumented immigrants are centered in industries that are impacted the most by COVID-19, such as food preparation and service sectors. Unauthorized immigrants who pay taxes yet are not eligible for social safety net programs are amid those at higher risk of hunger and eviction in this disaster. They are also unlikely to get healthcare if they get infected since most of them don’t have medical insurance. As reported by CNN, approximately 5 million of US-born children of undocumented parents will carry the weight of these consequences. There is no arguing in the fact that these undocumented immigrants have in one way or another violated the US immigration law. However, amid a pandemic like this, we must all stand with and by each other. It is about being a human, about humanity. Trump should at least reopen the Affordable Care Act’s healthcare exchanges temporarily to 30 million uninsured Americans.

On Feb 28, Michigan Governor Gretchen Whitmer activated the state emergency operation center to regulate the State of Michigan’s response to the virus. That’s to ensure that every branch of state government is fully prepared for the pandemic. On March 10, Whitmer declared a state of emergency across Michigan. To restrain the transmission of COVID-19, Whitmer urged Michiganders to stay at home or their place of residence to the greatest extent possible. The order took effect on March 24 at 12:01 am and will continue until April 13 at 11:59 pm. Michigan’s response to the outbreak is one of the most aggressive in the country. Yet, as stated by Michigan.gov, as of April 5, there are a total of 14, 225 confirmed cases in Michigan. The daily confirmed cases are 1,481 while the daily COVID-19 deaths are 61. Until now, 540 people died from the virus in Michigan, leaving us to have the third highest reported cases in the U.S. after New York and New Jersey.

Michigan’s peak is predicted to be on April 9. The TCF Center in downtown Detroit has converted to a temporary field hospital for COVID-19 patients. The Federal Emergency Management Administration transformed the TCF Center to serve as a hospital for at least six months until the spread of the virus slows down. Gov. Whitmer seems to be working hard to save her state; however, President Trump has done little to help states grappling with the crisis. The state’s chief medical executive Dr. Joneigh Khaldun said that Michigan might need a total 10,000 ventilators. Right now, Michigan has only about 1,700 ventilators. Earlier this week the federal government sent 400 ventilators then they sent another 300 ones.

Schools across Michigan have been forced to shut down and protect their students. One of the nice gestures Michigan State University did was making arrangements to house International students for the Spring and Summer semesters so they don’t have to travel and go through COVID-19 hot spots. The University of Michigan has been updating their website regularly on the virus for their students.

Henry Ford College has been very attentive with the virus. President Russ Kavalhuna has been very considerate with his decisions and the series of encouraging emails about the sudden changes in the Winter semester. The HFC website is being regularly updated with the latest information about COVID-19. In addition, the college created a Coronavirus Information Website that’s also regularly updated. The college has also made it easy for students to transition to online classes. Instructors, advisors and counselors are working around the clock to ensure our success. Laptops have been offered to many students who need them. Students also have the option to withdraw from classes or be given an incomplete until it’s safe to return to campus.

Stay home and stay safe. This virus is more dangerous than what many think.