Capitalism, Socialism, and Democracy: An Interview with Dr. William Barber 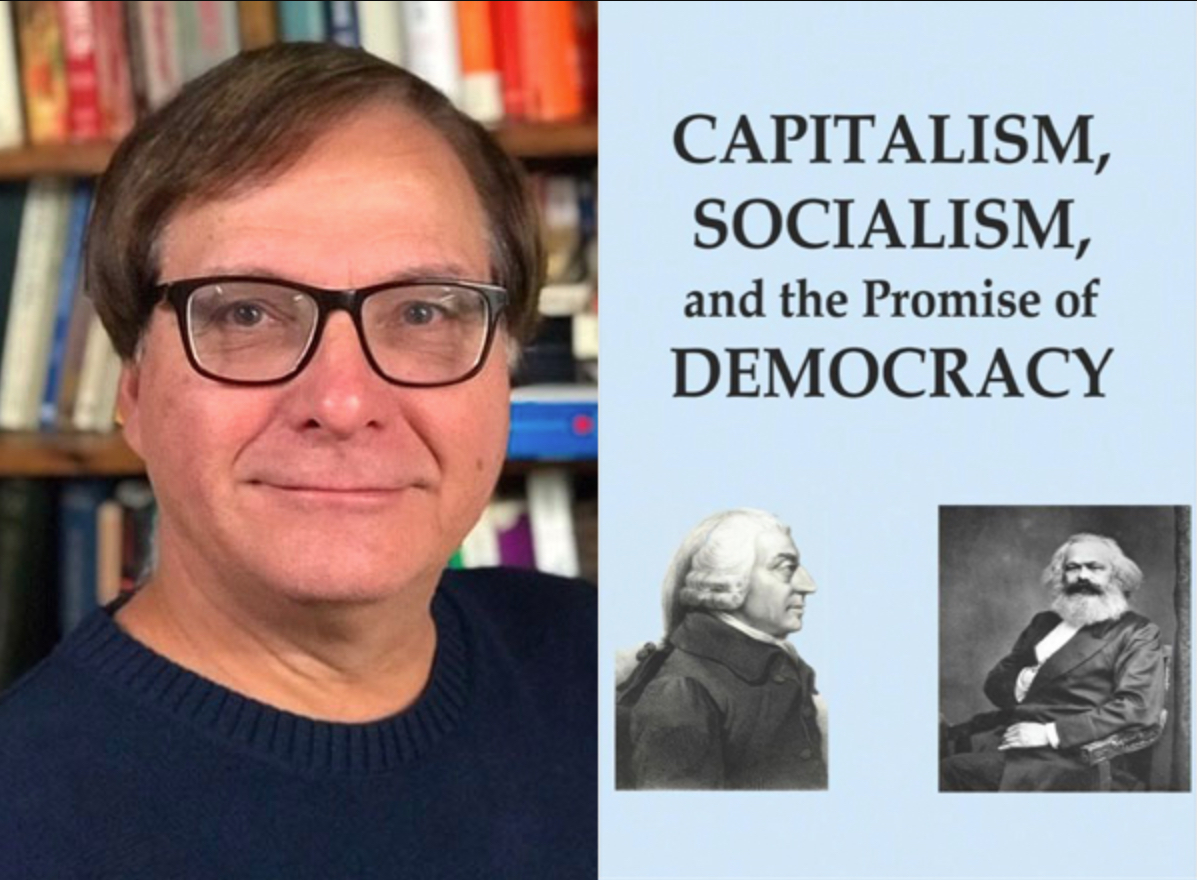 More often than not it is noticeable that economic policies and political parties, or individuals, proposing them are growing more polarized into two different lots. On the one hand, an abundance of pro-capitalist attitudes competes with, on the other, pro-socialist attitudes to persuade us how to efficiently organize an array of resources. Typically, these attitudes and proposals are not apt to apprise us of what foundations are motivating their appeal so that an understanding of what economic policies are pro-socialist or pro-capitalist is rare. Rather than deepen this confusion, “Capitalism, Socialism, and the Promise of Democracy” by Dr. William D. Barber provides clarity as to what U.S. economic policies have been and how they have impacted society from the late 1800s until now. Aside from the first-person experience he has in business, having worked with his family business back in the 1970s, Dr. Barber became a professor at Henry Ford Community College in 1981 shortly after earning a master’s degree in economics from Western Michigan University. He had previously earned his bachelor’s degree in business from the University of Michigan. He would go on to earn his PhD in economics from Wayne State University. Dr. Barber spoke to me about his recent book and some of the many connections it has to the current political and economical schism shaping American society.

CT: Did you develop any unexpected insights you hadn’t had before while writing this book? If so, what were some of them?

Dr. Barber: I wouldn’t say I did very much because teaching economics regularly, I read a lot of economics literature. One thing that did happen was me rethinking that democratic capitalism had existed in the past. Franklin D. Roosevelt had laid its foundations down, but also, Lyndon B. Johnson had really built on that foundation. Despite the bad press he receives for the mess the Vietnam war was, his domestic agendas on civil rights, economic justice, and environmental justice, he was quite the president. His goal was to expand on Roosevelt’s policies, and he did. I always had an appreciation for Roosevelt, but I gained a deeper appreciation for Roosevelt, and a better appreciation for Johnson.

Dr. Barber: Well, it is at times partisan, but looking at the history of our country, the partisanship we see today is not much worse than the partisanship of the past. Let’s go back to the American revolution, there were Tories that were opposed to the revolution, and if you want to see the worst period of partisanship, go back and look at the Civil War period. In fact, some books detailing the events leading up to the Civil War will remind you of the terribleness that is happening now. Partisanship is always underneath the surface, and we are going through a particularly rough period now, but there have been times in our country’s history where we’ve been able to overcome that. My hope is that there will be less partisanship in the future.

CT: Why do you think capitalism has recently been under such negative scrutiny?

Dr. Barber: Well, I talk about this in the book, the period of democratic capitalism that worked was the 1950s-60s. The benefits of democratic capitalism during that time were really reserved, as I say in the book, for white males and anyone who was connected to them. Women, minority groups, gays, etc. were discriminated against during this period. So, what happens is that people of today look back at capitalism, and I think this is a mistake they make, but they rightfully say “Well, it didn’t really work for me in the 1950s and 60s, so what are you talking about?” But the social progress we made in the 1960s and 70s, with the women’s, civil, and gay rights movements, and where we are now, if we returned to a democratic capitalist system a much wider array of people would be better enabled to participate. It’s a mistake when people condemn capitalism as a terrible system. There are some types of capitalism which are bad systems, but not democratic capitalism. The same is done with socialism. I think there are problems with socialism, but we should still talk about democratic socialism. The socialism that existed in China and Russia was totalitarianism, not democratic. What kind of system is going to work, right?

CT: You detail in the book how trade agreements contribute to the concentration of wealth and income. What should trade agreements be driven by or oriented towards to prevent and reconcile the disproportional distribution of its benefits?

Dr. Barber: Well, first of all, it’s a mistake to attack trade agreements themselves. I discuss in the book an observation Adam Smith had, which I think is true, that increased trade leads to higher levels of productivity which leads to higher living standards. Attacking NAFTA, the World Trade Agreements, and other trade agreements as the president has, that these agreements have somehow been rigged against the United States is incorrect, and I would disagree. Vast majority of economists would agree that the trade agreements have actually raised living standards across the globe, and in the United States.

The problem with the trade agreements, as you stated, is that higher income, higher wealth people have benefited disproportionately relative to middle/lower income, lower wealth people. There are various reasons why that has happened. One of the things is that never before in the history of the world have corporations been able to make profits, never have they been able to sell their products anywhere in the world. As the trade agreements occur, corporations can sell their stuff everywhere, right? Also, corporations have more choices in terms of where they can produce their products and choose the lowest cost countries. So, corporations have really benefited from that. So, the question comes, who owns corporations? Something like 10 percent of the people own roughly 84 percent of the corporate stocks in this country. So as wall street booms and as corporations make more and more money, certainly middle income people, and possibly lower income people, may benefit but the vast majority of those benefits from increased corporate profits go to a very small group of higher income, higher wealth people. So, the first thing that you have to do is increase taxes on that group so that the benefits don’t disproportionately flow to them. The second thing is that everyone benefits from the lower prices. That’s the thing it delivers. That’s the advantage of trade agreements, that you are getting lower prices. The negative effect of that is that middle/lower income, lower wealth people have been disproportionately affected by the loss of jobs and wages. Certainly, jobs can be created, but they are lower wage jobs. So, this group sees fewer job opportunities available in terms of quality and the wage. For them trade agreements are a win/lose. For higher income, higher wealth people the trade agreements are a win/win. They see lower prices, but also, their jobs, wages haven’t been nearly as affected, if at all, by these trade agreements. So, the question becomes what you have to do to restructure things so that the middle/lower income, lower wealth people aren’t in a win/lose situation? My argument is two things: economic support and the other thing is that higher-income-wealth people be taxed to provide the economic support.

CT: What impact do you think Joe Biden will have on the economy? How would his administration impact the global economy?

Dr. Barber: Whether it is Joe Biden, or had been Bernie Sanders, neither would attack our trading partners as Donald Trump has done, and that is an immediate improvement. Domestically, there are issues I agree with Joe Biden on, for example his proposal to expand Obama Care and the public option, but I have some concerns on how responsive he will be to the financial needs of the lower-income-wealth people. For example, when Elizabeth Warren had spoken out against reforming the bankruptcy laws that were put through during the Bush administration, I thought he came down, in the end, on the wrong side of that issue. Regardless of that, Joe Biden would be light years ahead of where Trump has put us.

CT: If re-elected, what impact do you think Donald Trump will continue to have on the economy? How will his administration continue to impact the global economy?

Dr. Barber: I think that the economic risks of a second term for Donald Trump, for example, risks of democracy, risks of economic freedom, risks to what goes on globally, and the continued struggle of lower income, wealth people to receive adequate health care amongst other things, pale to the danger Donald Trump is to the fundamental constitutional structure of this country.

CT: What do you want the readers to take away from the book?

Dr. Barber: Well, several things really. One thing I hope for people to have is an appreciation for the connection between the economic system you choose and the political system you end up with. One of the other most important questions is how do we preserve democracy? Look at it with a socialist system and a capitalist system. The natural tendency of a capitalist system is towards an increased concentration of income and wealth. Well, what happens then is that the concentration of income and wealth allows people to control the economic system, and you no longer have a democratic political process. To a large degree you will have a plutocratic political process. So, we have a choice, what do we do about that? To prevent that from happening? In the book there is a chapter on what I call policy prescriptions, and among those are taxes on wealth and income. I think with democratic socialism the question is can you create a socialist system that preserves democracy? Certainly, when you look at what happened in previous socialists’ countries I don’t think that happened very much but that doesn’t mean it won’t work going forward and that doesn’t mean we shouldn’t have that discussion.

Dr. William D. Barber is a full-time faculty member of the economics and business department at Henry Ford College and teaches courses on microeconomics and macroeconomics. You can purchase his recent book, “Capitalism, Socialism, and the Promise of Democracy” on Amazon. It is available electronically, and in paperback and hardcover.