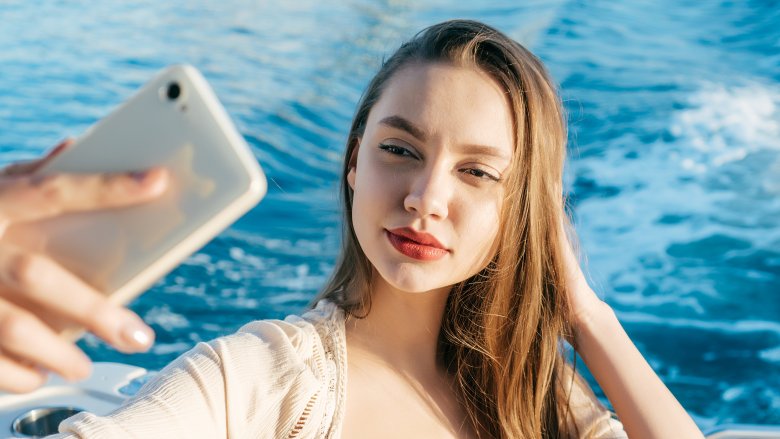 It’s a question that’s ravaged the minds of teens and young adults alike, passed down from generation to generation: what’s trendy? Not only trendy, but cool? It used to be hoop skirts, then shoulder pads, even low waist jeans (we’ve all been there). Fads, fashion included, are fluid. They are constantly changing, especially in this era of social media.

There used to be a life without cell phones. No touch screen, no instant messaging, just a landline attached to the wall of the most popular room in the house. “Fit checks” didn’t exist, stories were limited to books, and following people was creepy. Now, not only are these things perfectly normal, but they’re essential to life online.

What used to be silly selfies and food pictures has transformed into a world of Tik Tok dances, “mom” jeans, and “off guard” selfies, all originating from the same few influencers. A social media influencer is a user that spreads their influence over their fanbase and beyond.

Teenagers like Emma Chamberlain and Cameron Dallas have taken over the Internet by creating trends for young people to follow, that is, until the next one comes along. Some are cool, some are weird, but all influencers have the power to elevate social status.

By this point, you’re probably wondering what it takes to become an influencer. That’s where I come in. With two younger sisters and years of personal experience, I’ve seen what it takes to be an Instagram personality, and though there isn’t a formula, most Tik Tok routines serve the same purpose.

Tik Tok, a video-sharing network, hosts nearly 46 billion users recreating the same skits and dance routines. These videos make their way to Instagram, Twitter, even Facebook, delivering new music and fresh moves to any willing participant. Some of the more popular tunes include “Lottery” by K Camp, “Sugar” by Brockhampton, and “Roxanne” by Arizona Zervas, all of which have their own jig. They might take a few days to memorize, but if you’re dancing for more than ten minutes it counts as exercise.

Creating a Tik Tok dance or skit is a crucial step in becoming an influencer. If you don’t like the dance, but enjoy the song, make up your own! All it takes is a little clapping and tons of random movement. Wave your arms around! Fall over! As long as it’s Tik Tok, it doesn’t matter. If the app isn’t already downloaded onto your mobile device, you should probably reevaluate your dedication.

Ladies, this one’s for you! Recently, a new kind of photography has taken root on Instagram in particular, one that involves taking a bath. Strange, I know, but it’s a trend that’s taken the photo-oriented app by storm. All you need is bath milk, rose petals, and a friend with a nice camera (any smartphone will do). Here’s where things get confusing, you should never look like you are bathing, quite the contrary. You gotta pull out your nicest bathing suit, put on a fresh face of makeup (don’t forget the smokey eye!), and work that tub! Confidence is key. If you’re limited to a shower, just wait a few weeks, that might be the next photo-op!

Last, but never least, are fashion trends. Today, teens emphasize the importance of staple pieces within outfits. Now more than ever, less is more, but that doesn’t mean these items are less expensive. The more money it costs, the cooler it is. This constitutes clout, a term that gives kudos to someone’s style. Nike Air Forces, for example, can be spotted anywhere from the gym to the beach, and can cost $120.

The key is spend the most on the least. Nowadays, it’s cool to buy a pair of shorts for $130, especially from Lululemon, a clothing store that specializes in athletic wear for people who don’t workout. The prices are outrageous, but, the brand, easily recognized by its silver emblem, builds clout. Monotone and simple, tight-fitting Lululemon can be worn with anything, like Air Forces, and the tighter, the better, especially on the bottom!

Becoming an influencer is no easy task. With something as muddy as social media, it takes hours of scrolling and wrenching thumb-work before determining what’s “in.” If all else fails, make your own style. Dance to a different beat. Anything. Just make sure your shoes aren’t creased.