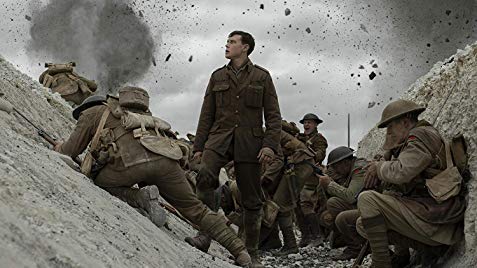 Director Sam Mendes’ feature length unblinking approach of making “1917” is phenomenal. Mendes uses several takes and seamlessly combines them to give the movie a one long shot point of view. This technique leads viewers to go back in time through the battlefields and trenches of Northern France as two young British soldiers embark on a mission in April 1917 during World War I.

“1917” follows Blake and Schofield, two soldiers commanded to deliver a message to fellow troops to stop a catastrophic attack. To get there, Blake and Schofield have to venture through the enemy’s territory and inform their comrades about the trap the Germans have made. If the message is not delivered in time, 16,000 men will die. Blake’s brother is among them.

Due to the meticulous attention to details and brilliant production team, Mendes was able to put the audience in the shoes of the two soldiers and experience the war through their eyes. The extraordinarily smooth cinematography from ground level to the bird’s eye view by Roger Deakins makes the experience feel real. To make the film look like one-shot is not something new to cinema; however, “1917” took it a step further with the non-stop action and continuously changing landscape. The movie never uses the same location twice. As the story unfolds and Blake and Schofield are breathlessly running from one horrible place to another, the anxiety, tiredness, and fear of loss become palpable.

“1917” is based on actual accounts of World War I, which was where traditional military fighting went against modern war machinery resulting in death and destruction at a scale not seen before. Horses and bayonets were used as well as newly developed machine guns and airplanes.

Audiences may be surprised to see Indian actors as well as Africans in the film. Indians and Africans were significant in WWI, but their contributions may not be well-known. With “1917,” Mendes brings attention to that and so much more about the futility and tragedy of war that we should not ignore.