The Not So Magic Planet 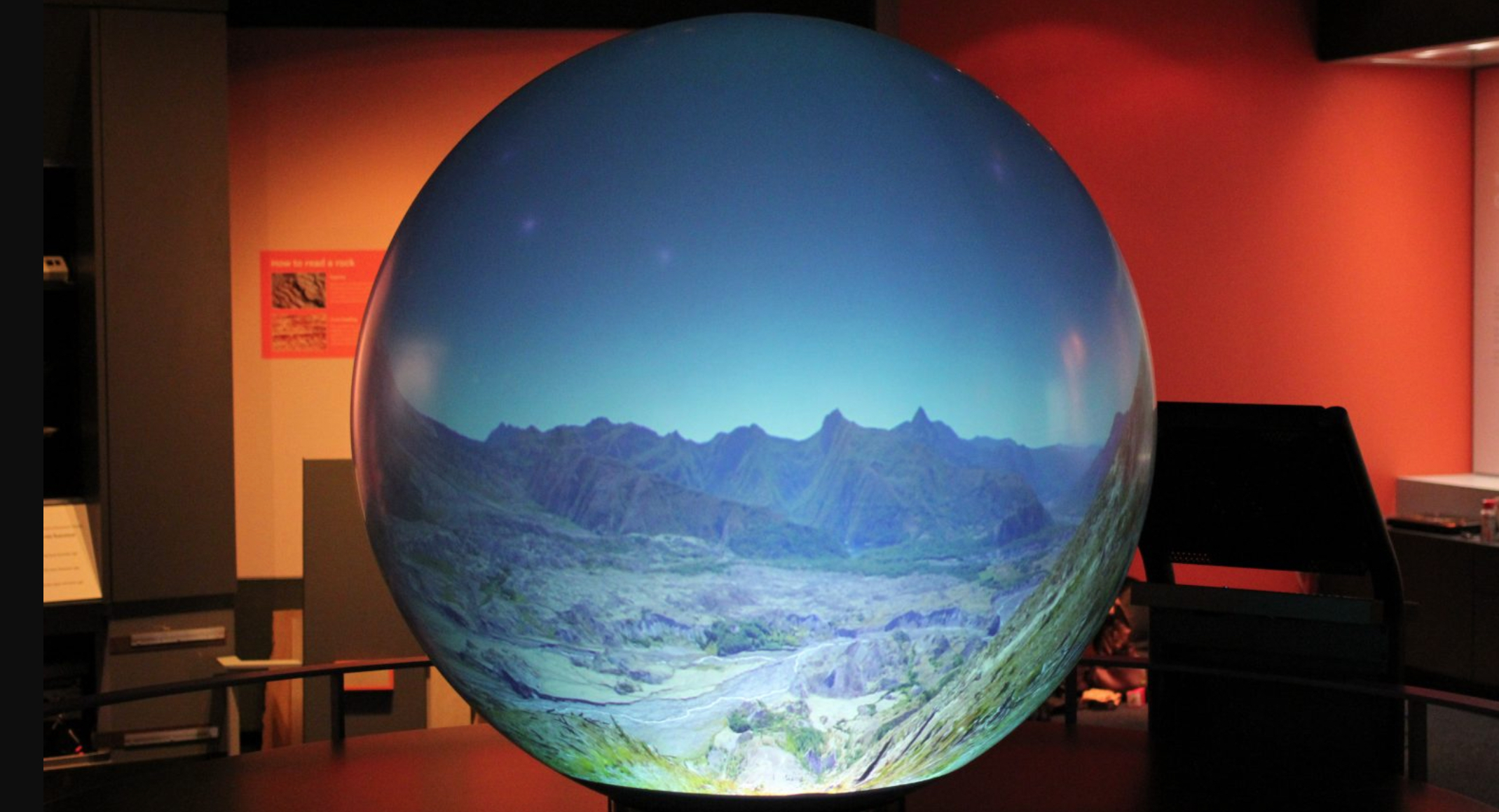 If you have ever had a class in the science building you may have noticed an array of interactive fun throughout the building with the likes of interactive touch screens, an extensive and informative mural depicting the timeline of the universe and of human life on earth and a fully functional planetarium. You may have also noticed in the basement of the building a giant black sphere sitting smack dab in the middle of the downstairs commons, known as the Magic Planet.

The interactive touch screens feature a different planet on each screen and represent a scale model of the solar system in both size and distance. That means walking to the next planet would be to scale of the actual distance between planets with one screen being as far as a quarter mile away.

The interactive system was coded by Henry Ford College’s own CIS students. Tabs on the screens offer a bevy of media, entertainment and facts. Do you wonder how old you would be on Jupiter? You can find that out once you find the interactive Jupiter screen. You can magnify the planets, spin them and flip them to get a closer look at the planets surface. Ever wonder how long it would take to deliver a pizza from Earth to Mars? Visit one of the interactive touch screens and find out; just be sure to give the delivery person a nice tip! The interactive learning experience is fun, engaging and a success.

The Hammond Digital Globe, better known as the Magic Planet, has been anything but a success. The black sphere more closely resembles a magic 8-ball then it does a planet. Over the years, since 2012, the Magic Planet has rarely worked. How did the planet come to be?

“Originally [the idea] came from Charlie Jacobs, at the time, he was the Associate Dean of Science. He does a lot of curriculum stuff and he is always searching for new stuff,” said Steven Murrell, Henry Ford College physics professor, “He found it and asked if this would be good for the astronomy program and I said, yes, this looks like a really good piece of technology.”

This was in 2010 and was to coincide with the major addition to the science building. The desire for the Magic Planet to be unveiled during the Grand Opening Ceremony of the Life Science Center caused a rush to complete the project. The Grand Opening Ceremony had such dignitaries as the late Congressman John Dingell, then Dearborn mayor John B. O’Reilly, and business and community leaders, so the pressure was on.

The goal of the Magic Planet “was sort of multifaceted; one thing we wanted to do was maximize the usage across the different departments,” Murrell said. “It displays any kind of spherical data on this big spherical screen. It has the ability to show the surfaces of all the planets and most of the moons. People studying geography and politics could study all kinds of other information like population data, geo-political data, and you could display live weather patterns. It was good for geology and atmospheric sciences as well,” Murrell explained.

Henry Ford College has a “very successful” community outreach program for astronomy education, according to Murrell. The outreach program includes planetarium shows. The hope was for the Magic Planet to augment that. The program on average could bring in a hundred students on a given day and all those students won’t fit into the planetarium. The groups would be divided up and one portion would attend the planetarium show, another would visit the interactive planet kiosks, and the third group would get a presentation of the Magic Planet.

“The idea never came to fruition though,” Murrell said, “because we could never keep the Magic Planet working.”

The Magic Planet came with a hefty price tag of approximately $225,000 paid for using Henry Ford College’s Technology Improvement Fund (TIF), a percentage of student fees earmarked to pay for technology improvements around the campus. In theory, the Magic Planet was expected to be an improvement. Or at the very least, a bragging point for the school. What went wrong?

“We were under the impression that this was a tested product and it was reliable but reality was a little bit different,” Murrell said. “Right off the bat when we ordered it there was a long delay because Global Imagination was still designing it. That should’ve been a red flag, but we had already ordered it and put a deposit down. Right off the bat some of the software wouldn’t communicate with the hardware and that would get fixed. The thing that kept happening was the projectors would keep shutting off. There was an issue with the projector and the cooling system. It never seemed to work.”

According to Murrell, Global Imagination “came back a couple of times and swapped out projection bulbs and tinkered around with a couple of other things.” Murrell continued, “Every time they would leave it would sort of be working. Two weeks later it would shut off again. Eventually they just sort of stopped answering emails. They weren’t very interested in fixing this thing.”

Global Imagination has not responded to emails.

Murrell further states that Hassan Nameghi, head of the engineering department at Henry Ford College, did some work on the globe and could get it working for short bursts of time, but ran into the same issues.

Even without a working Magic Planet, the public outreach program for astronomy education continues to be popular. The Hammond Planetarium hosts an estimated 1000 people a year. The shows that take place at the planetarium differ from season-to-season, four different shows in total, and are produced and voice acted by Henry Ford College faculty.

The Hammond Planetarium puts on shows every Wednesday at 2 p.m., and every other Saturday. All shows are free and open to the public. For more information about the shows or to schedule for private groups contact Robert Clubb, director of Hammond Planetarium, at rclubb@hfcc.edu.

As for checking out a working Magic Planet, Murrell says, “We’re gonna be lucky if this thing ever works again.”