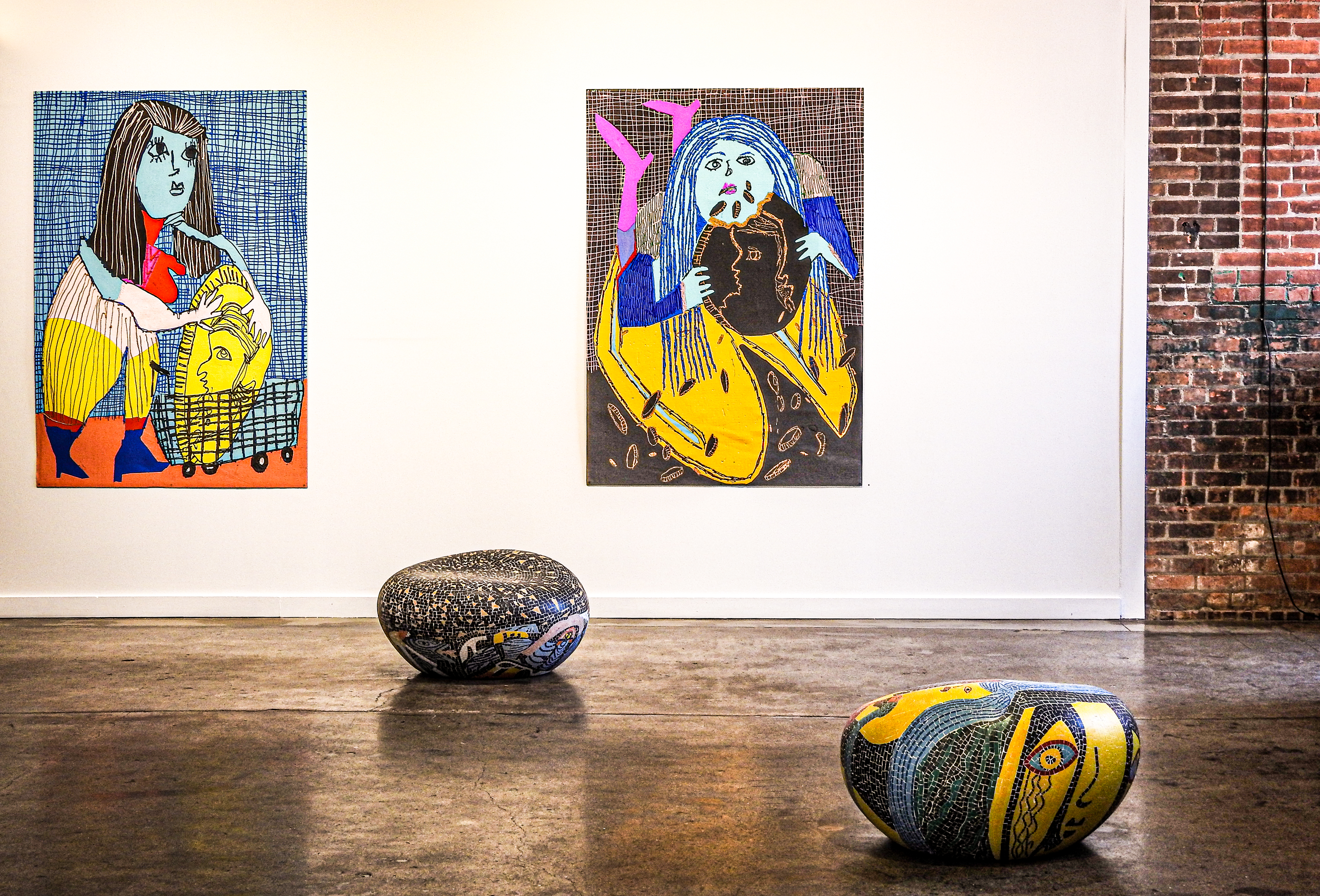 New York artist Summer Wheat, Hirosuke Yabe from Japan and Portland artist Matthew Bennett Laurents are featured at the Wasserman Projects, an internationally respected gallery and museum at Eastern Market in Detroit. All three artists create authentic works that one needs to see in person to really appreciate them.

Summer Wheat’s exhibit varies from paintings and drawings to ceramics that are inspired by the economic downfall and rise of Detroit. Specifically created for Detroit, her work portrays excess and consumption. The collection is an illustration of female figures with coins mixed with organic forms. The exhibit includes eight colorful ceramic piggy banks and four paintings. Wasserman Projects gallery director Alison Wong says, “Calling them paintings is a little bit misleading in a way because they are created with paint, but they are done with almost more sculptural techniques.” Wheat’s work is tactile, inviting touch due to the process Wheat uses to create her pieces.

The obviousness of consumerism pervades throughout Wheat’s collection. In “Cookie Coin,” a female figure is literally consuming a coin. With “Coin Cart,” consumerism is portrayed by the figure of a woman buying a coin in a cart. Wheat also contributed eight porcelain “Piggy Bank and Stars, No 1-8” which represent Detroit’s post-bankruptcy revival. Three mosaic stone-like seats are painted with mythological forms and appear soft. The stone seats show Wheat translating her drawings into three dimensional forms. Wheat was attracted to Native American patterns and craft methods. She examines the relations between humanity, animal life and the environment. She usually includes myths, cultural symbols and global histories to analyze human experiences. Wheat particularly concentrates on the significant yet sometimes underrated work and artistic contributions of women. Wheat told Artsy that her work is “sensual, disturbing, ugly but beautiful,” and her pieces have a “skid row messiness with refined elegance.”

Hirosuke Yabe’s installation is his largest exhibit displayed in the U.S. to date. Yabe built two large-scale structures onsite using materials found in Detroit. The largest of the two is partly influenced by a broad concept evolved by Yabe himself named “The Faithful Dogman.” In its press release, Wasserman Projects explains that “Dogman serves as a metaphor for the constant sense of wanting and unabated consumerism that pervades both Eastern and Western cultures.” Accompanying “Dogman” is a smaller “Young Dogman” sculpture, which appears like a reclined puppy.

The second structure is titled the “House of Consumption,” and is also made from wood found in Detroit. When entering the structure, there are many small wood carvings that look like tiny inhabitants.

All three of Yabe’s wooden structures use electrical motors that power whirligigs, giving them a Rube Goldberg kinetic energy that splashes light and shadows on viewers. The technique is at once playful and haunting.

Yabe is well known for his Japanese hatchet technique called Natabori. Wong explains, “That hatchet makes these really distinct marks that are sort of rough and speak about the true human condition; one that’s flawed in a way.” These sculptures were built of logwood and recycled or obsolete wood, which were taken from destroyed Japanese houses, some dated to more than 100 years old.

Yabe’s work usually combines abstract geometric forms symbolic of human emotions and psychology. Yabe is mainly inspired by the emblem of African masks and the spirit that imbued them. In his artist statement, Yabe claims, “I make wooden sculptures that look like animal anthropomorphic creatures, sometimes monsters too. Actually, I think that these are all humans.” Yabe continues, “Sometimes they are expressionless, and we can’t tell from their expression what they are thinking. In a sense, possibly, they are like the Japanese character… perhaps.”

The third exhibit is by Matthew Bennett Laurents. a Portland, Oregon artist who graduated from Cranbrook Institute of Arts in Michigan. His collection of hand-built ceramic vessels is assembled in seven vignettes. His sculptures portray carved faces that revolve around the history of craft and ritual. The sculptures explore the “potency of objects as vessels for both spiritual and emotional ability.” The vessels are displayed against brightly colored backgrounds and on pedestals. Wong said, these particular vessels “embody a particular person within an environment.” Laurents created distinct personalities for each vessel which speak differently for each person’s charisma.

Wasserman Projects is free and open to the public, Wednesdays, Thursdays and Saturdays from 11am to 5pm, and Fridays 11am to 7pm. The three exhibitions will run through Dec. 21.