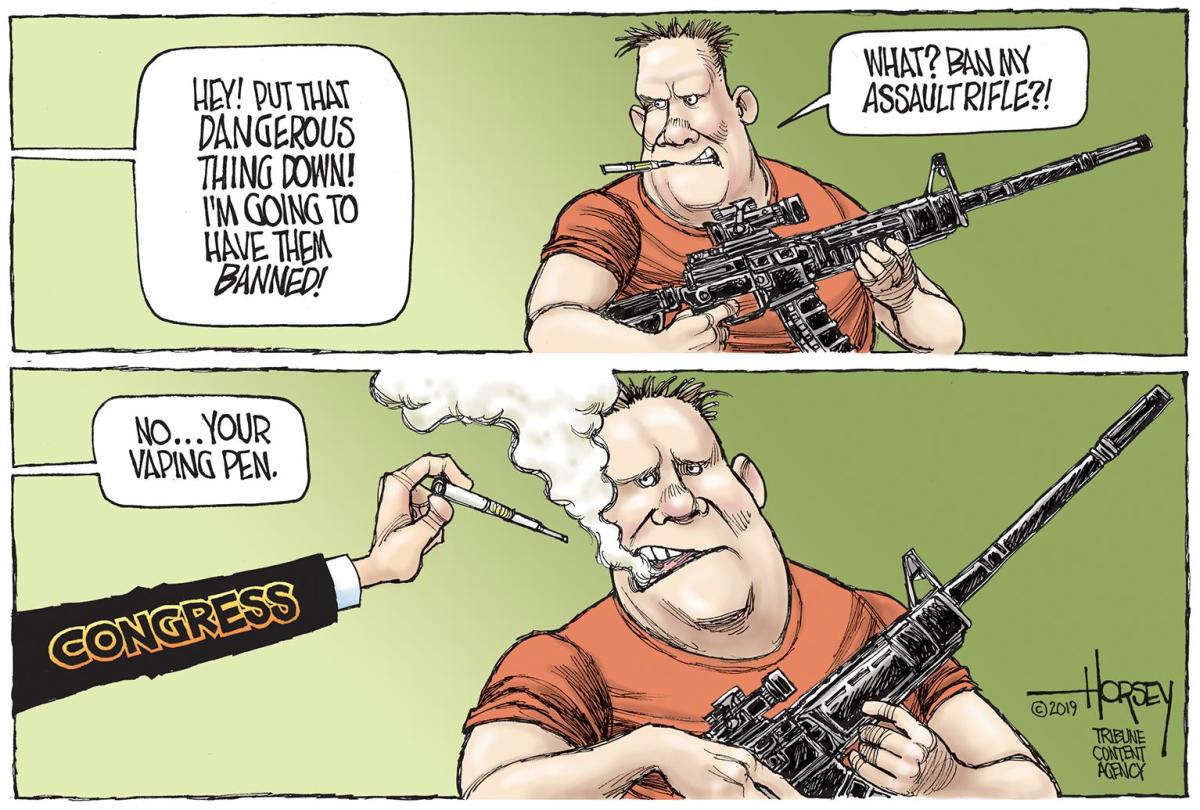 The children! The children! Won’t somebody think about the children? This is the message from on high of capitol hills like Washington D.C. and Lansing, MI. This movement to ban vaping out of fear over the effects on children started after a surge of vaping-related deaths across America.

Vaping has become an everyday staple in American society. There are not many public places that are not infected with the plumes of vapor smoke shooting up like steam from the stack of an old west locomotive—all the smoke and no click-clacking on the train tracks of political rhetoric until recently. This addictive product slowly invaded the highs schools, parks, malls, movie theaters, and nearly every single public place.

The devices range from sexy and sleek “pen-like” devices that range in a multitude of bright colors and trendy designs and other larger devices that look like breathalyzers. On Sept. 4, Gov. Gretchen Whitmer (D) signed an order that would make Michigan the first state to ban flavored vape juices. These flavors have been long suspected of being targeted to the youth of America. A new addiction that is engineered to create a whole slew of young Americans addicted to nicotine.

“My number one priority is keeping our kids safe and protecting the health of the people of Michigan,” Whitmer told Laurie McGinley of the Washington Post.

A week later, President Trump (R) would announce his plan to remove flavored e-cigarettes and nicotine pods from the market. The ban would include mint and menthol flavors which have been argued to not be a flavor. Ironically this does not include traditional tobacco menthol flavors, or the flavored cigar wraps that are sometimes used to roll marijuana blunts.

Here we have, for the first time in years, a partisan agreement: ban flavored vaping to protect the children. Don’t let that fool you that the government is truly concerned for your health or the health of your children. The entire message of “think about the children” is nothing more than political butter on your belief toast. It is dressing. It is deflection. There have been an estimated 1,299 mysterious cases of lung disease and 29 deaths linked to vaping, including the death of a 17-year-old last week in the Bronx. Vaping-related illnesses and deaths perhaps could have been avoided had the industry been more carefully regulated.

The F.D.A. was given the power to regulate vaping products years ago, but very little was done. The annual $7 billion industry comes with a lot of political swagger in the form of lobbying dollars. Lobbying is the influence of politics from large companies and organizations that often has more power in changing legislature and laws than the average citizen has.

The government delayed and weakened efforts over that ten-year span that could have protected teens and other users. In multiple interviews, health officials have blamed the intense lobbying from e-cig and traditional tobacco industries for the hindrance in meaningful regulation. There was even a F.D.A. commissioner who served on the board for a chain of vaping lounges.

Two large e-cig companies successfully sued the F.D.A. for regulating the industry like a drug and the F.D.A. was forced to treat it as a tobacco product under the newly passed and less-stringent Tobacco Control Act.

The tobacco industry has been a long-time friend and pocket stuffer of political figures throughout the lifetime of tobacco in America. The Obama administration, in its last year, rejected a proposal to ban flavored e-cig which surfaced in the face of fierce lobbying over tobacco regulations.

In 2017, Trump’s administration granted a four-year reprieve from regulation before needing to prove that the health benefits outweighed the health cost. This has always been the selling point for vaping; it is safer and healthier than traditional tobacco products. A claim that has been largely unstudied and unverified, yet that has been the message received by the citizens of America.

This may sound familiar if you follow the epidemics currently plaguing our country. In the late 90’s Purdue Pharma advertised oxycontin as a less addictive and safer option than other opioids. Oxycontin has contributed to the worst opioid epidemic the country has ever seen.

What can get opposing parties to agree on something in today’s political climate? As evident by their reactions to school shootings and opioids, two things that are severely impacting the safety of the youth of America, it is not the children. No matter how badly politicians want you to hear their message that we must act to keep our children safe, the numbers paint a different picture.

Tobacco-related deaths claim an estimated 480,000 lives a year. Opioids claimed over 20,000 American lives in 2016 alone. Between 1999 and 2016 at least 26,000 children and teenagers younger than 18 were killed by gun violence, according to data from the Centers for Disease Control and Prevention. Any meaningful measure to mitigate real legislation is quashed by political posturing and lobby money.

Let’s talk about money. The Tobacco Master Settlement Agreement was entered in November 1998 and it stated that the four largest tobacco companies (Philip Morris Inc., R.J. Reynolds, Brown& Williamson and Lorillard) agreed to settle their Medicaid lawsuits for recovery of tobacco-related health care costs. In exchange, the companies agreed to stop advertising in certain ways; all smoking commercials on television ceased to exist, no more cool tuxedo-clad camel or dirty but sexy cowboy. They would also agree to pay $260 billion over 25 years to the states.

Let’s do the math. That’s $260 billion divided by 25 years and again by the 4 companies coming to a grand total of $2.6 billion a year. However, the leading tobacco brands make $35.1 billion combined annually, equal to the combined profits of Microsoft, Coca-Cola, and McDonald’s in the same year. If Big Tobacco stays with that average, which is a gross estimate, they stand to still make $877.5 billion over the time of the settlement.

It is important to note that big tobacco has also acquired some of these vaping companies at the heart of the vaping epidemic. The most well-known e-cigarette brand is Juul, which dominated the market at the end of 2018. In December of that year, Philip Morris USA bought a 35 percent stake in Juul.

By the same token, Big Pharma companies have begun settling multi-million dollar lawsuits with states in recent years. Jonhson and Johnson paid $20.4 million in a settlement that did not admit culpability, Mallinckrodt Pharmaceuticals settled a recent lawsuit “in principle” for $30 million, and Purdue Pharma has reached a tentative settlement worth an estimated $12 billion.

Purdue Pharma will also agree to develop and donate some drugs for treating addiction and overdose. The Sackler family, the family behind Purdue Pharma, will also contribute $3 to $4.5 billion of their own money towards victims of the opioid crisis. Purdue Pharma and the Sackler Family has made $31 billion on OxyContin alone. Purdue Pharma continued to market and make a profit from OxyContin, despite, as mounting evidence has shown, they knew the harmful effects of the drug. They continue to produce hydromorphone, oxycodone, fentanyl, codeine, and hydrocodone.

According to Susan Scutti of CNN, Big Pharma spent an estimated $27.5 million in lobbying in 2018. Alex Gangitano of The Hill reported that this year, Juul Labs already spent $1.95 million to lobby lawmakers.

It is clear that either side of the vaping controversy stands to make money. So, the question remains: what about the children?