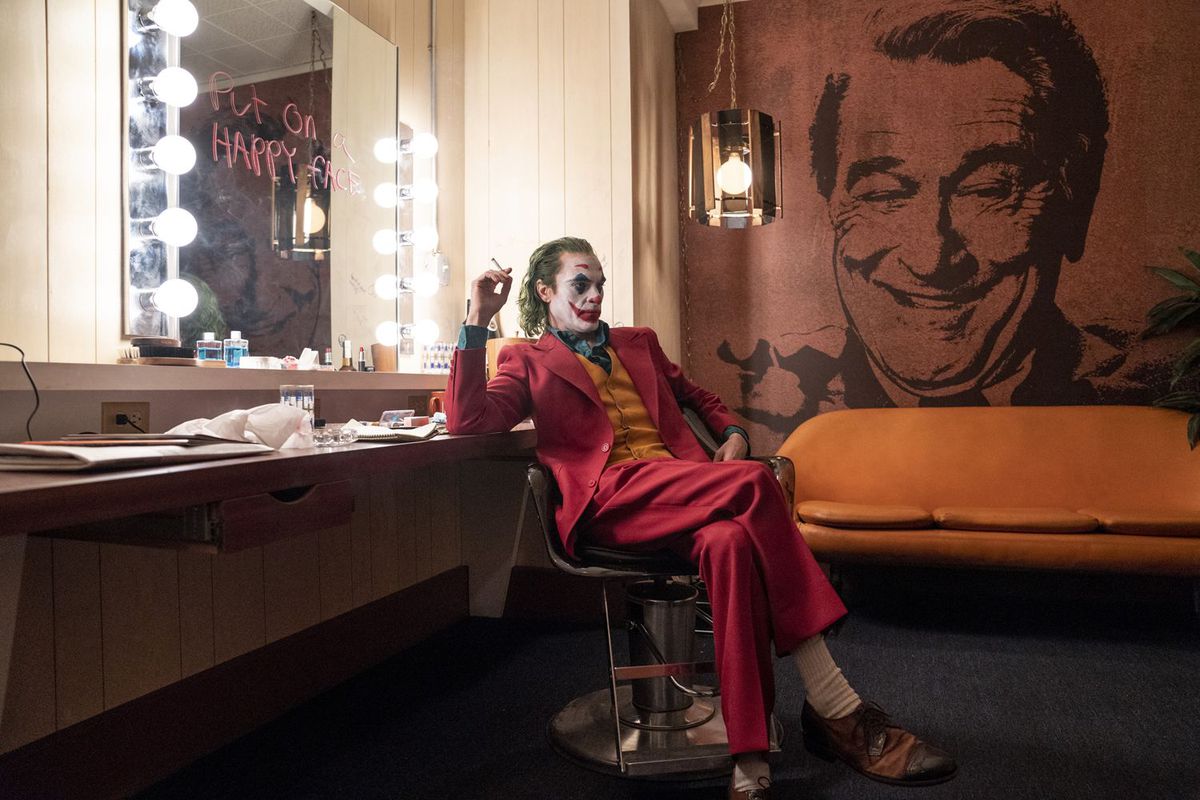 Directed by Todd Phillips and starring Joaquin Phoenix, “Joker,” a Warner Bros. standalone spin-off of the Batman film franchise, has arguably become the most talked about movie of 2019.

From being touted as a genius reflection of art imitating life, to being criticized as a diabolical potential inspiration for villainy in real life, the film sparks debate and steers conversation beyond the confines of the DC Universe.

A reimagination of the origin story of the Joker, Batman’s nemesis and Gotham City’s most formidable supervillain, the film is rooted in comic-book lore, but it is far from being a typical comic-book film. Set in 1980s Gotham, “Joker” follows the life of Arthur Fleck (Joaquin Phoenix), a socially awkward man-child seeking connection in a society riddled with unemployment, poverty, crime, and social injustice.

Arthur is an aspiring standup comedian. He works as a clown for hire and lives with his ailing mother whom he takes care of. Arthur suffers from mental health issues. He has a condition that causes him to laugh uncontrollably when he is nervous. His condition often gets him into precarious situations. As the story progresses, we learn that Arthur’s condition may have been brought on by childhood abuse. Because of his condition, and the fact that he is socially awkward, Arthur is rejected and looked down upon by society. After being brutally beaten up by a bunch of hoodlum teenagers, then having his mental health medication cut off due to budget cuts by the city, Arthur spirals downwards. He loses his job as a clown for hire and is publicly humiliated by a celebrity comedian he idolizes. His relationship with his mother, the only person who has ever embraced and accepted him, disintegrates and ends macabrely. Haunted by delusions Arthur sinks into a world of violence and anarchy and eventually transforms into the Joker.

In previous appearances in comic books, animated series or on the big screen, Joker, a ghoulish, sadistic, violent character capable of immense horrors was simply the personification of evil, reinterpreted by various writers to fit the story they wanted to tell. While his villainy was constantly glamorized and glorified, it was rather nihilistic, with no purpose other than the impulse to destroy. It was clear that the Joker was a villain, a bad guy viewers were happy to see defeated.

Phillips’ Joker is different. Because of his compelling backstory, as ghoulish, sadistic, and violent as he ends up being, viewers can’t help but feel sorry for him. He did not set out to be a villain; he is a good guy turned bad. He is the way he is because society made him that way. Society has failed him; society deserves him.

Joker is far more depraved than the villain we are more familiar with. His villainy is not confined to just him and the group of miscreants that hang around him. He inspires a movement and is revered as an avatar for the downtrodden and the disenfranchised masses who bear the brunt of Gotham City’s class divide. As diabolical as the violent acts of those that subscribe to the movement are, they somewhat seem justified. The Joker and those that follow him are monsters of Gotham City’s own creation.

As an origin story, “Joker” is original and plausibly convincing. Before “Joker,” what we know of how the Joker came to be is that he was a criminal who was disfigured after falling into a vat of toxic chemicals while trying to escape capture by Batman. While Phillips’ Joker deviates from that narrative, implicitly, it doesn’t stray too far off. The toxicity of the vat of chemicals is replaced with the toxicity of society. The end result is the same, and Batman, albeit before the mask and the cape, is still featured in the story.

“Joker” also wanders beyond the confines of the comic-book world by evoking and channeling the narratives and aesthetics of critically acclaimed films outside of the DC Universe, with the most prominent film being Martin Scorsese’s 1982 film “The King of Comedy.” Like “Joker”, “The King of Comedy” is about a man who violently rebels against a society which he feels has wronged him. Set in 1980s New York, “The King of Comedy” stars Robert De Niro who plays a struggling comedian obsessed with a famous talk show host. In “Joker,” Arthur, a struggling comedian is obsessed with a comedy show host played by none other than Robert De Niro. Phillips perhaps pays homage too obviously and it somewhat detracts from the originality of the “Joker” narrative.

Philips also similarly channels films like Scorsese’s “Taxi Driver” (1976), and David Fincher’s “Fight Club” (1999). While this lends some level of “real film” legitimacy to the comic-Book film, it is somewhat hollow as it does little to advance the “Joker” narrative. Interestingly, “Taxi Driver” also stars Robert De Niro.

Joaquin Phoenix does a superb job of bringing the complexities of the character of the Joker to life. While he is naturally talented, well experienced in portraying some of the most interesting and iconic characters on film, it is clear that he put a lot of work into preparing for the role of the Joker, perhaps a little more than the film warranted. The Joker’s persona is larger than life, so much so that at times, he dwarfs everything else. It is a little distracting at times, but then again, perhaps that was exactly what Philips intended for viewers to experience.

Released on the heels of recent mass shootings in Dayton, Ohio; El Paso, Texas; and Gilroy, California, “Joker” has fueled debate on the role of films in the discourse on gun violence. Concerns have been raised that real life may imitate art, and individuals on the fringes of society who identify with the Joker may use “Joker” as a handbook for exerting vengeance on a society they feel has wronged them. A couple of days ahead of its opening weekend, the FBI and the Department of Homeland Security issued a joint bulletin warning law enforcement agencies across the country of threats posted online calling for mass shootings at showings of the movie.

Concerns over the film’s premiere were also particularly heightened because of the 2012 mass shooting in Aurora, Colorado, where a gunman opened fire in a movie theater on the opening night of “The Dark Knight Rises.” Twelve people were killed and 70 were wounded.

As the discourse on how far is too far in the use of movies as a mirror of society’s problems continues and more “Joker” related controversies are reported, the film continues to enjoy success at the box office.

So far, there have been no reported incidents of acts of violence perpetrated in relation to the film.