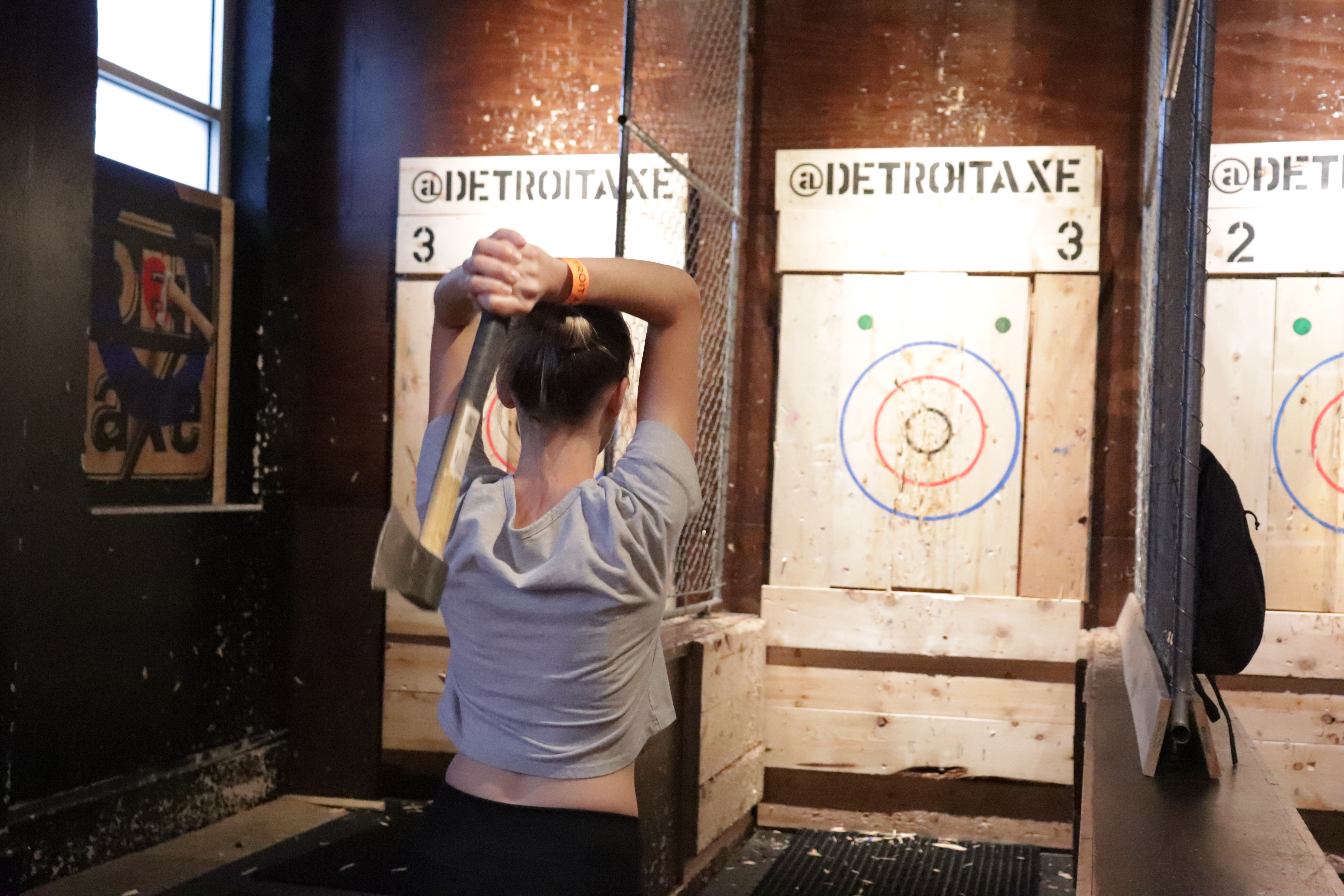 Have you been binge watching Game of Thrones? Getting over a breakup? Or maybe you just crave to feel the weight of an axe in your hand, and to hear the thunk of it being thrown against a wooden target. If you are longing for this super specific feeling, then I have good news for you.

Detroit Axe in Ferndale, MI, is both fun AND safe. Just looking in from the outside is enough to make you want to go in. With their modern, rustic aesthetic, Detroit Axe welcomes patrons into a cozy restaurant with a sitdown bar. While picking from many food options like briskets, burgers, and brownies (oh my!) you can also pick a board game from their dedicated wall that houses over 500 games. You have the option between some classics like Jenga, Scrabble and Monopoly, or some more obscure games like Settlers of Catan (my favorite) and A Game of Thrones- the board game.

If you made an axe throwing reservation, then you’ll head upstairs to be checked in and wait for your team’s turn in the lane.

While waiting, you can lounge on the couches, play some old school arcade games, get a drink at the upstairs bar (which is limited to one drink per hour as a safety precaution), or get some picture worthy shots up on the giant wooden throne.

Now it’s finally your turn with the axe. Each lane fits 8-12 people, but if you reserve a group of only two to four people, you will likely be paired with strangers. After going over the rules, your team’s designated axe master will help you practice throwing techniques, and also give you tips along the way. Typically, you’ll learn how to throw the axe with both hands over your head, or just one, and decide if you like to stand in one spot or take a step. If you’re having a difficult time sticking the axe, the master will give you some tips on where to stand and how to throw differently.

The point system is pretty simple: the outer, blue ring of the target is worth one point, the middle, yellow ring is three points, and the inside, red ring is five points. If your axe lands between two colors, the axe master will pull out a little tape measure to get a more precise point. The way it is set up, each person (depending on how many are in your group) will get a chance to compete against everyone in individual rounds made up of 15 throws (taking a break every five throws). If you get all five bullseyes in a row, you win a free t-shirt.

The axes used are about one foot long, more like a hatchet size, but the real fun happens when you and your opponent tie. This is when the big axe gets played. Watching others throw the big axe can be both amusing and challenging. Before trying it myself, I thought, “Oh I could do that.” I couldn’t. It was so much heavier than I had anticipated. I had to stand about 5 feet further back than one typically stands for the other axes. People laughed as I hauled this three foot axe that I could hardly throw at the target, let alone make it stick.

The commute from Henry Ford College is about 40 minutes during rush hour. Detroit Axe announced earlier this year that it will be opening two new locations in the Metro Detroit area. Detroit Axe is the first wholly dedicated axe throwing venue in the state of Michigan.

Not all axe-throwing bars are the same. Brenna Houck reported in Eater Detroit that Hub Stadium in Auburn Hills received a temporary liquor license suspension for several infractions: “Drinking alcohol while throwing axes, ax-throwers wearing open-toed shoes, a lack of monitoring by bar management and axes ricocheting off targets in the direction of participants were among the concerns listed by the Michigan Liquor Control Commission.,” reported Gus Burns of MLive. Hub Stadium management told the Michigan Liquor Control Commission they “had implemented some changes and would continue to implement others,” according to Burns.

Axe throwing is growing in popularity. Bull’s Eye Axe Throwing in Lansing is planning a 10,000 sq. ft. expansion. Haley Hansen, in Lansing State Journal explains how “axe-throwing has become a competitive sport with more than 4,000 leagues in 50 cities across five countries, according to the Toronto-based National Axe Throwing Federation.”

After my visit to Detroit Axe, I definitely discovered muscles I didn’t know I had.