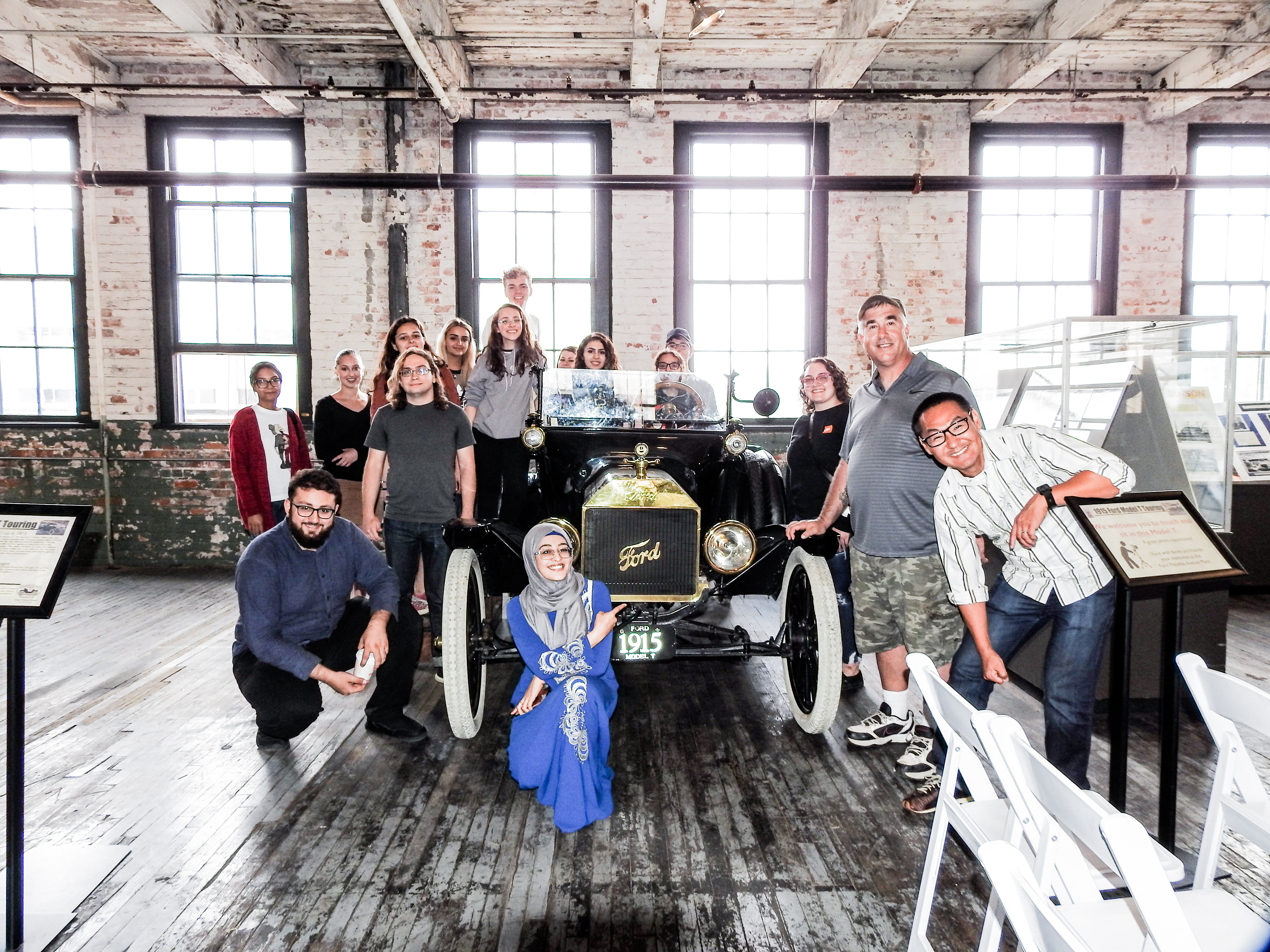 First designed and built inside the Ford Piquette Avenue Plant, the Model T revolutionized the concept of transportation in the U.S. and reshaped the history of the automotive industry. Visitors to the Piquette Avenue Plant learn not only about the Model T, but also about the many models that came before the iconic “horseless carriage,” such as the Model B, C, K, and N. The Model N was the country’s best-selling car by 1907, a year before the Model T was introduced to the public.

Initially built by hand, only eleven Model-T cars were built for sale in October 1908. However, by December, production increased to 200 cars a month, an unheard of number at the time. Production of the Model T increased to 600 cars a day at the Highland Park plant where Ford implemented the automated moving assembly-line. By 1918, nearly half of all the cars in America were Model Ts. Visitor Service Manager Allison Savoy said, the Model T “was the car that took off and they were able to build this in this building. They built the first twelve-thousand here.”

The Piquette Avenue Plant tour begins with a brief history of the building. When Henry Ford began making cars in the Piquette Avenue Plant, the building was in a constant flux as different car models were designed as well as production methods were continually being improved. It was obvious even before the Model T that the company needed more room for production, so when Ford needed more space, he added outbuildings to the west of the plant. P. E. Martin, who was in charge of the Assembly Department, had to make the most out of the space in order to produce as many cars as possible.

Henry Ford was well aware of the devastation fire can do to factories and warehouses due to the major fire at the nearby Oldsmobile factory. Savoy explained that Ford ordered fireproof doors to be installed when they built the Piquette Plant. She then added that “they are designed to close each section of the building. There are four sections of them, so if there had been a fire, this rope would have been ignited causing weight to drop the door so it would slip close.”

In 1998, during a tour at the Piquette Avenue Plant arranged by Richard Folsom, president of the Henry Ford Heritage Association, attendees discovered that the current owner was going to demolish the building and make it a steel warehouse. Shortly after, the association raised enough money to buy and save the building. Volunteers, donors, and the community came together to save the Piquette Plant to make it a thriving museum. In 2002, the Ford Piquette Avenue Plant was placed on the U.S. National Register of Historic Places and listed as a Michigan State Historic Site the following year.

Tom Genova, tour guide, explained that the Model A was the first car by the Ford Motor Company. Ford built this model at the Mack Avenue Plant that preceded the Ford Piquette Avenue Plant. Genova added, “It was $900 cost to the customer back at that time. If we use economics of multiplying by thirty, then that would put you in the neighborhood of twenty-seven thousand in today’s funds.” The car had many available options such as the optional top. It also had a removable headlight that could be taken out and used as a flashlight.

HFC student Ron Soyk described the tour as “a journey through time. Really enjoyed the magnet exhibit. My favorite was the blue Model A.”

Genova explained how Henry Ford was under a little bit of pressure by the investors as they wanted a more luxurious car than the previous Model A, so he built the Model B. Genova said of the Model B that “Henry built five hundred of these machines, and today there is only a handful of them that are left.”

During the third leg of the tour, prototypes of some parts of the Model T are on display such as a Model T chassis. During the last part of the tour, visitors can see for themselves Henry Ford’s “secret experimental room” where the Model T was born.

HFC student Hannah Brooks said of the tour, “The high parts were that Ford did look ‘forward’ and saw what could be accomplished and stuck with his dream. He saw the ‘American Dream’ and didn’t stop until he had it.”