The Whitney: Fine Dining and Ghosts 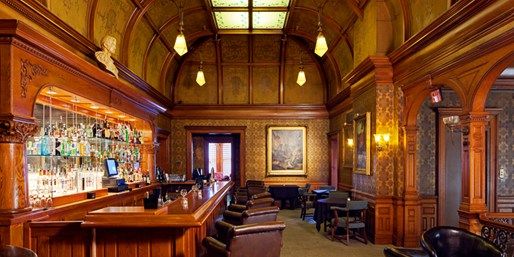 Located at the corner of Woodward and Canfield avenues in Midtown Detroit, a stark contrast of the buildings around it, stands The Whitney, an upscale fine dining restaurant in an iconic turn of the century neo-Romanesque mansion majestically paying homage to a bygone era.

The Whitney mansion was built as a residence for David Whitney, Jr., a successful lumber baron, the wealthiest man in Detroit, and one of the wealthiest men in Michigan at that time. According to HistoricDetroit.org, the mansion is estimated to have cost $400,000 (about $9.5 million today).

Whitney was said to have been a humble man who would have been happy living in a log cabin. His wife, on the other hand, had extravagant taste. She wanted a mansion that would, without reservation, exhibit the family’s wealth and highlight their status in society.

As lavish and extravagant as his house was, Whitney did not fully enjoy its magnificence. He died in 1900, only 6 years after the mansion was built. Following Whitney’s death, his widow continued to live there until her death in 1917.

In 1941, after several years under the care of a caretaker, the Whitney family donated the mansion to the Wayne County Medical Society, which then transferred ownership to the Visiting Nurse Association.

In the 1980s, the Visiting Nurse Association sold the property to businessman Richard Kughn who restored it and turned it into a restaurant. The mansion changed hands once again in 2007 when Kughn sold it to Bud Liebler.

Liebler renovated it, restored the wood finishes, updated the menu, and rehabilitated the garden area. He re-established it as a world-famous fine dining restaurant giving its patrons a taste of the city of Detroit’s glory days.

Today, The Whitney provides several unique features within the historic property. It is not only world-famous for fine dining, but also for the paranormal sightings and experiences that are synonymous with the building.

Prior to being turned into a restaurant, the Mansion was used as a tuberculosis hospice. It is believed that the ghosts of TB patients that died there, as well as the ghosts of the Whitneys who had also died in the mansion, remain to haunt it.

Of particular interest is the aptly named Ghost Bar located on the 3rd floor. The 3rd floor of the mansion once housed the Whitney family’s art gallery, some guest rooms, as well as servants’ quarters. Several sightings of ghostly apparitions and paranormal experiences have been reported there.

As the servers share the accounts of their personal experiences with the ghosts of Whitney Mansion, you get a bit of a chill. The dramatic effects of the light fixtures fitted into the elaborate curves of the vaulted ceiling originally meant to illuminate art pieces perfectly set the tone: the ghostly figure of an elderly gentleman staring out the window; Mrs. Whitney clad in a Victorian-era dress flanked by two butlers sipping tea in one of the rooms; furniture moving on its own; silverware being thrown about; and several similarly bizarre occurrences have been reported.

Aside from the sightings of the mansion’s resident apparitions, the Ghost Bar is best known for one of the city’s best happy hour menus and live entertainment.

If the Ghost Bar or happy hour does not tickle your fancy, there are several other options: the Garden Party on Thursdays, Motown Review on Fridays, Songwriters Brunch on Saturdays, High Tea on Sundays, and so much more. For more information, visit wwww.thewhitney.com/events.