Home is Where the Skoolie Is 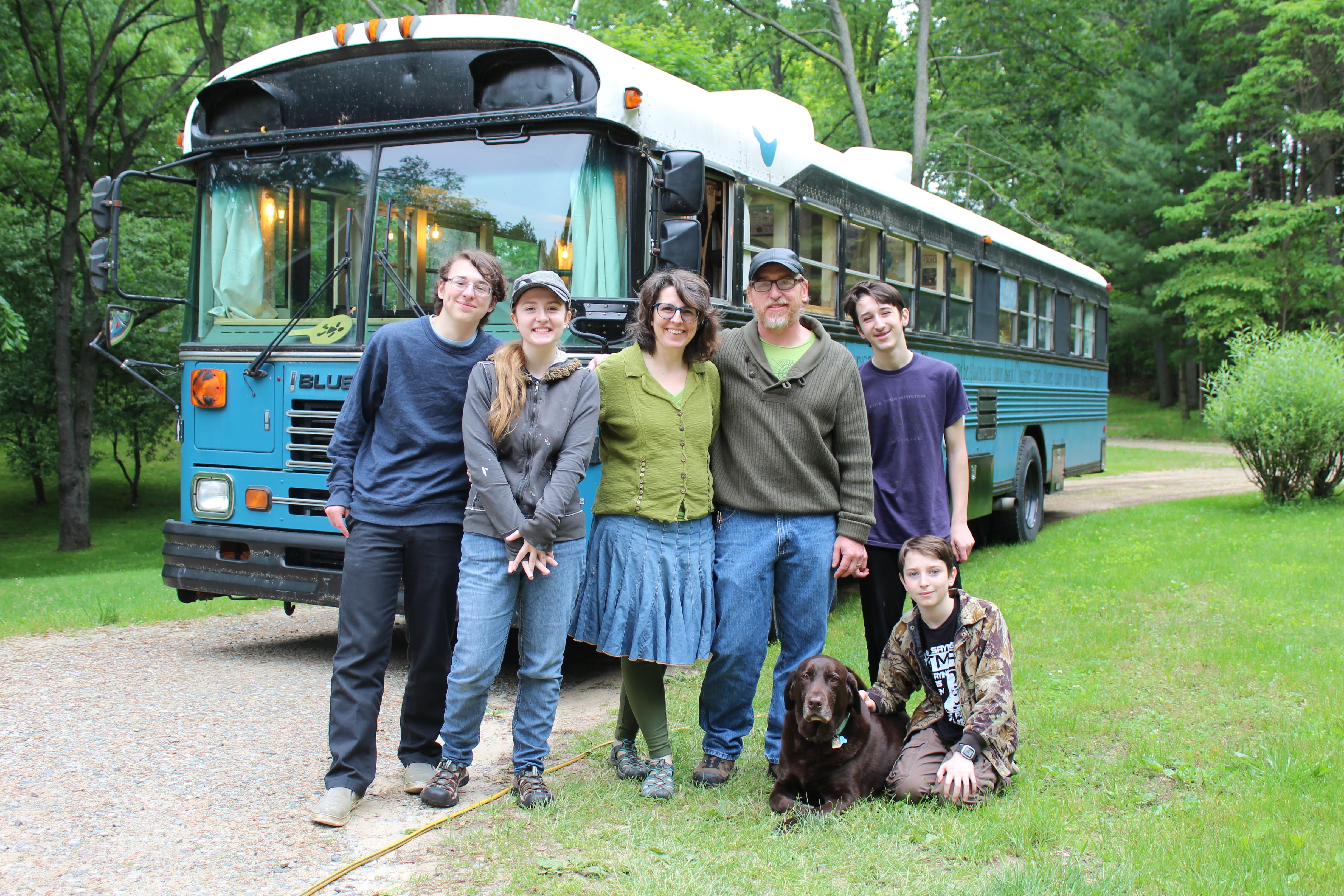 Urban Dictionary defines a skoolie as a school bus that has been purchased by a private owner and converted for some other purpose other than hauling people around, such as RVing. It can be a very economical and cost-efficient means of obtaining an RV.

Like the tiny house movement, or rather, an extension of the tiny homes’ movement, skoolies are becoming every bit as popular. Though many singles and couples consider the idea for recreational activities, there are a few folks that are moving into the renovated buses.

A school bus can be bought through many outlets such as your local school district or on the internet for a few thousand dollars. Once removing all the seating there is about 200 square feet to work with and create a living space. Like a tiny home, the space must be used effectively. A partially renovated or completely renovated bus can be purchased for around $10,000 and up.

Who are these brave souls that are willing to sacrifice space and an address to make such a daring lifestyle change?

The practice is most popular among young millennial singles or small families. What about a larger family? With kids? Lots of kids? And a dog?

Meet the Welch’s. Russell and Carrie have been married a long time and it shows, in the most endearing ways. Russell may begin telling a story and Carrie will jump in, finishing thoughts and sentences, with neither of them missing a beat, or the other way around. Like a lot of married couples, the Welch’s have children, 10 of them. And a dog.

While all the Welch children had a helping hand in the restoration of the bus, only a handful will be making the bus a permanent home. Four of the children will be living in the bus. Joyce Welch, 18, Caleb, 17, Elijah, 14 and Zach, 12. Of course, we can’t forget Captain, the 9-year-old chocolate Labrador retriever.

Two summers ago, Russell remembered the exact weekend in July when Carrie and he went camping in Port Huron. Russell had heard of this crazy idea of transforming a school bus into a modular home called a skoolie.

“I told her it’s a cool idea because ever since we were married,” Russell recalls of the fated summer, “we bought and sold campers, tore them apart, reworked them. Our first camper was a 1972-73 Airstream that was in somebody’s backyard.”

“It was full of mice,” Carrie, a Henry Ford College student, added in the middle of Russell’s thought, “and dead squirrels.”

At the end of the holiday weekend, the couple went home, and Russell went to work on Tuesday. Russell is a master electrician. Carrie, who describes herself as efficient and a doer, had bought a used Blue Bird bus delivered from Grand Blanc school district into their driveway by the time Russell had returned from work. An idea on Saturday became a reality on Tuesday. A huge idea and a huge reality.

The bus is as unique as the family that will call it home. The traditional yellow and black bumblebee bus has been painted robin egg blue and has an old Irish blessing for travelers inscribed around the outside: “May the road rise up to meet you. May the wind be always at your back. May the sunshine warm upon your face, and rains fall soft upon your fields. And until we meet again, may God hold you in the palm of his hand.”

It isn’t until you climb inside the Welch Family Blue Bird that you get a real feel for the identity of this modular home and the family that calls it such. After gutting the bus of all the seats and other typical bus items, the family didn’t see what most of us may, a big metal cube of garbage. The Welch’s saw a blank canvas. They saw opportunity. Every decoration and household accoutrement has a story that brings it to life. The dining room table is decorated with map clippings of places that the Welch’s have lived or vacationed. The kitchen’s stainless steel counters and cabinets came from one of Russell’s electrician jobs at a hospital in Detroit. Russell’s career lends itself to the wanderlust spirit the family has cultivated. Every state has need for electrician work.

In fact, most of the home is picked, found, gifted, or refurbished. Curtain rods made of old piping and plumbing made from an old fire extinguisher are just some of the home’s items found unwanted and repurposed for a new meaning.

The cabinets are painted with a mural that tells its own story. The mural is painted by Joyce Welch, daughter of Russell and Carrie, and the family artist, and it details memorable places the family has enjoyed.

“This is Lake Superior; you can see a little freighter,” Joyce describes her artwork, “The next is a generic Michigan forest with a hiker because we love to hike. The last is of a waterfall up north in the U-P.”

Covering an outlet in the kitchen is a sort of warning or proviso that says enduring the cook’s cuisine is the most fruitful option. If not, you could be treated to the recipe decorating the outlet: a 1950’s era jello and vegetables dessert, featuring lime jello, cottage cheese, seasoned veggies, and mayonnaise thrown into a mold and served cold.

The Welch’s are no strangers to moving. They are no stranger to harsh living conditions either. The couple has moved 30-plus times since exchanging vows. Their children have made many moves with them.

Elijah recalls moving into a home in Davenport that did not have running water or electricity. They lived in a camper while they built up the house. They bought a house on 10 acres during the recession and the roof had so many holes it was like it was raining inside the home. The house had plants growing inside of it and a tub that was remembered as a cave, complete with stalactites and stalagmites.

“So, this is an upgrade,” Carrie jokes, “We actually have running water.”

Moving can be difficult and emotionally draining. The Welch’s have a remedy for that.

“It can be hard to move,” Carrie explains, “so, I take a little piece of something from each place we lived.”

There are shelves made of pieces of wood from the children’s school projects, outlet covers, drawer handles, and wall art made from tin that has been collected from the life well-lived by this family.

In true nomadic and gypsy spirit, Carrie listed their current home for sale before completing the bus. The home sold. Quickly. In fact, the family was so unprepared, the first week of showings came on the worst week possible. It interfered with Joyce’s open house at school and work for both Carrie and Russell. The house is sold. The move out date is looming.

When they began renovating the bus, the neighbors noticed. Some neighbors said that they did not appreciate the bus being there and think it is an eye sore. The Welch’s live on a private drive surrounded by tall pines and other trees. One must really look for the bus to see it.

The children are not exactly celebrating the recent lifestyle change. Though, they are not against it either.

“I always think that when I get older I’m going to want to have a house and just stay there my whole life,” Caleb Welch says, “Part of me is afraid that I’m going to be like my parents and I’m not going to be happy in one place. I’m just going to keep on moving.”

Caleb is also the child who calculated that each person living in the bus will have approximately 42 square feet of personal space.

Private space may be difficult to come by in bus living.

When confronted with this dilemma, Russell likes to fall back on a quote from Theodore Roosevelt that says:

“It is not the critic who counts, not the man who points out how the strong man stumbles, or where the doer of deeds could have done them better. The credit belongs to the man who is actually in the arena, whose face is marred by dust and sweat and blood; who strives valiantly; who errs, who comes up short again and again, because there is no effort without error and shortcoming; but who does actually strive to do the deeds; who knows great enthusiasms, the great devotions; who spends himself in a worthy cause; who at the best knows in the end the triumph of high achievement, and who at the worst, if he fails, at least fails while daring greatly, so that his place shall never be with those cold and timid souls who neither know victory or defeat.”

Russell states that this quote is as much a hindrance as it is a personal blessing as it sometimes gets him into trouble.