Finding My Brother Through 23andMe 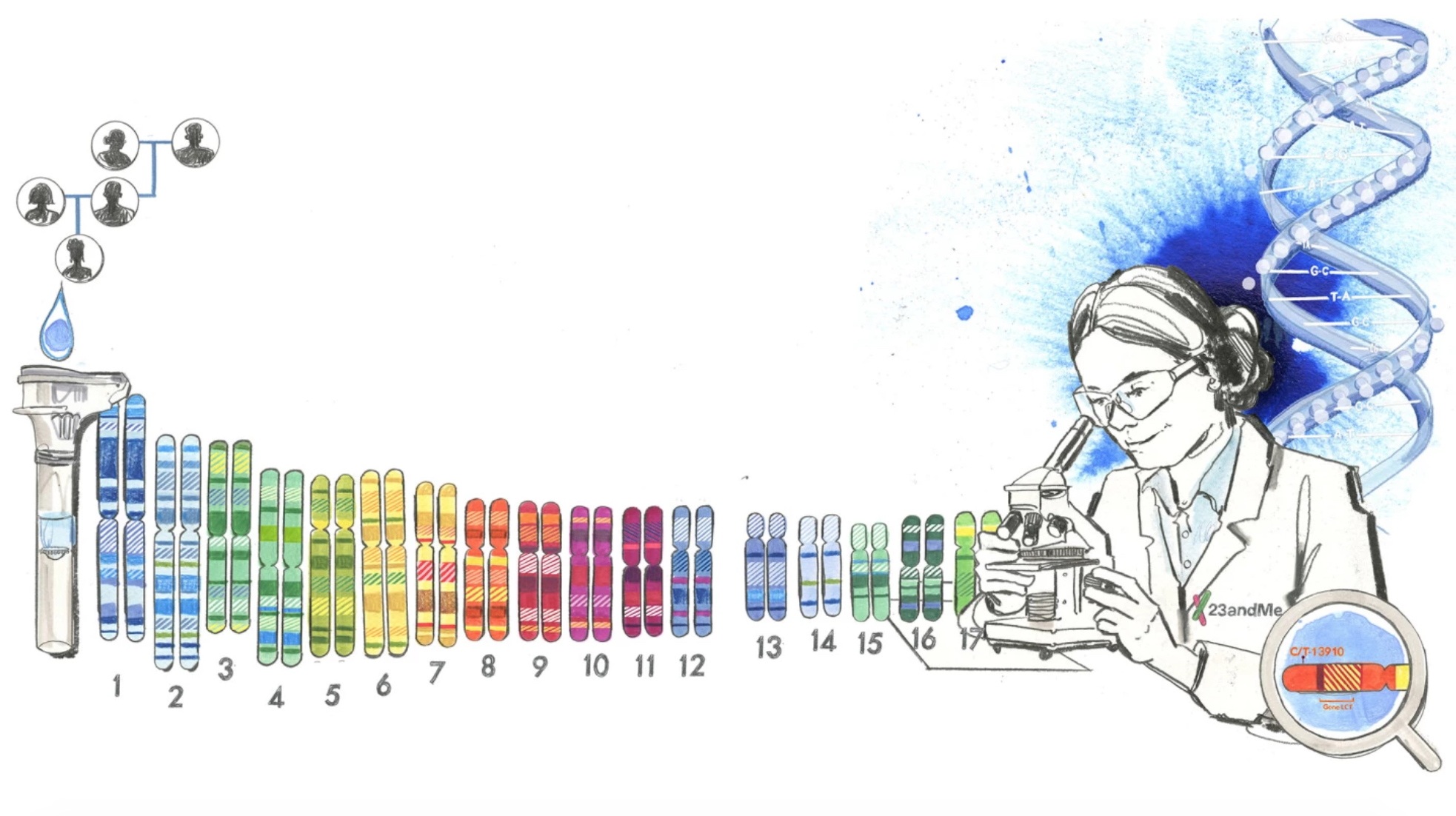 Earlier this year, I learned my sister had a different father than me, prompting me to dramatically question my own family lineage. I look more like her, with pale skin and light blonde hair, than my other sister, who has olive skin, with dark-colored hair. While I do know my father’s side of the family better than my mom’s, it did not occur to me that my mom could have had my sister with a different dad.

I suppose I should not have been surprised. I live only 15 minutes away from my mother and know very little of what’s going on in her life. If I didn’t live with my father and see him daily, I would honestly say the same about him. I know very little about my parents. I don’t even know how they met. I don’t know why my father is divorced from his second wife. My mother will occasionally vacation out of the country and I won’t know until she’s gone. They have no idea what I’m actually majoring in. My dad constantly tells people I’m in school to be a teacher; I am not.

In spite of this, I would never have guessed they could go through with hiding a sibling from me.

Looking back, it seems obvious that my sister had a different father. She did not bear the D’Alfonso name, and was instead graced with my mother’s maiden name, and we were given the bizarre explanation of “it just sounds better.”

While I only recently found out that my sister has a different father, she has known for about ten years. My mother had left her laptop open, and my sister, about 21 years old at the time, noticed my mother sending extremely personal details about her and her newborn daughter to a stranger. My sister confronted my mother, who admitted that she was sending the information to her paternal grandfather.

Despite this, when I decided to research my lineage, I honestly wasn’t expecting to find anything controversial. In reality, although I look decidedly very un-Italian, my facial features are similar to my father’s. Still, I thought I’d learn a bit about my ancestral background, which would be fun, and I would gain peace of mind that my father was my biological father. I was so young and naïve back then (a whole three months ago).

On Feb.4, I bought a 23andme kit from Target and got started. It was requested that I not eat for several hours prior, and I spit in the tube and sent it out in the mail. I anxiously awaited my results, checking the website almost daily.

I finally received my results over a month later on March 21. The first thing I did was check my ancestry composition. I learned, to absolutely nobody’s surprise, that I am 97.1 percent European.

I excitedly began sharing screenshots of my percentage breakdown in a group chat with my sisters. I switched over to the “DNA Relatives” tab and was completely taken aback to find a brother listed, with 48.4 percent DNA shared.

I thought that there must have been a mistake. I posted on a popular subreddit to ask how possible an incorrect match was, only to find out that high of a percentage is unlikely to be made in error.

Assuming that the results were accurate, according to 23andme’s website, only a parent, child or full sibling will show that percentage shared. I’ve never had a child and I correctly matched with relatives on both parents’ sides. The only option left was that he was a sibling. A full sibling, meaning he’s not the result of some affair or a donor or something like that—he’s the child of both my parents.

Through 23andme, you can choose to keep your information private until you accept somebody’s connection request. Because of this, I had no other information about him except that he was, apparently, my sibling, and a male. No location, no photo, no age, no name. Just initials. Until he accepted, I was left in the dark.

Obviously the speculation between my sisters and I began immediately. My oldest sister refused to believe it and said it must be “a glitch in the matrix”—there’s no way mom and dad would give up a baby boy. They had wanted one so badly.

My middle sister and I were left to figure it out on our own. We had reasoned he must have been their first child together, younger than my oldest sister, 31, but older than my middle sister, 27. My parents had started dating when my oldest sister was two years old, leading us to believe he must have been between 28 and 30. Being in a relatively new relationship, maybe they were not quite ready. They didn’t know each other well enough, or maybe they weren’t financially stable enough to support another child.

Of course, we pressed our parents. My father nearly flew into a fit of rage at the mere mention of it and completely denied it. My mother acted as though she had no knowledge of the situation and quickly changed the subject. With no headway made there, I asked my paternal grandfather which, in hindsight, was a terrible idea. He is quite the gossip. The only progress I made by doing that was near-immediately spreading that information throughout my entire extended family and getting myself bombarded with completely unanswerable questions.

A week passed by with no response from my ‘brother.’ I’d sent him two messages at that point, but had mostly given up on the prospect of ever speaking with him. With no information from my family, and no messages from him, there was no hope of figuring out who he was. I thought, maybe he doesn’t want to invite me into his life; he’s already got his own family. Or maybe the emails alerting him of my request went to his spam folder, and I am forever lost in an infinite void, completely unknown to him. I sent off one a final message and included my cell phone number. I set my phone down, resigned to never understanding this part of my life, and went back to work.

Within an hour, he accepted my request and shot over a text: “I guess you’re my sister.”

I guess I’d badgered him into talking to me.

I stared at the text message completely unaware of what to say. I had waited weeks for this to happen and I went completely blank. Nothing had really prepared me for the appropriate conversation to have with a secret brother. I had texted my sisters, who were poking and prodding, telling me what to ask him. All I could think was, why do I have to be the one with this responsibility? Why did I have to essentially be my family’s representative? It was all well and good when it felt like a fantasy, but it suddenly became real and I had no idea how to handle it.

My coworker had my newly discovered brother’s Facebook page pulled up before I could even finish processing what just happened. I felt like a total creep pouring through this complete stranger’s photos, but he also felt eerily familiar. He looked exactly like my father, and I knew this was no fluke. The most we could glean from his Facebook profile was that he was attending law school in Washington, D.C., and was engaged.

I finally worked up the courage to respond, awkwardly asking him if he was adopted. Well, duh. Of course he was.

He said, yes, and has known practically his entire life. We continued talking and I learned that he grew up in Novi, approximately 30 miles away from my hometown of Lincoln Park.

Shockingly, he was 24—two years younger than me. This completely ruined the scenario that my sister and I had fabricated.

How is that possible? My oldest sister would have been around eight years old. How does she not remember my mother going through a pregnancy? We had also discussed this brother with my aunts and uncles, none of whom were aware of a pregnancy. My parents wanted a son so badly—why would they give one up?

I still don’t know the answer to any of it. Despite knowing that I talk with him, my parents completely deny it. My extended family also attempted to do some investigative work by looking through photos from around that time, but ultimately learned nothing.

On one hand, it is unbelievably frustrating that my parents won’t own up to it. I don’t want a long story or explanation, just a confirmation that it happened. Combined with the obfuscation of my sister’s true parentage, it shatters any trust I previously had with my parents. On the other hand, I understand this must have been an extremely difficult and painful time for them; one they likely don’t want to relive, and I shouldn’t force them to.

He and I have talked about meeting, but with him living in D.C., it’s up in the air for the time being. We mentioned potentially meeting in August, but nothing is set in stone. Still, it is nice to know who he is. It feels nice to have some sort of contact with him, even if it doesn’t amount to a typical sibling relationship. We still keep each other in mind and text on occasion. He texted me in April to wish me a Happy Birthday. We exchange photos of our adorable cats—he just got a new kitten!—and periodically discuss school and future career plans. We don’t talk often, but it’s nice to keep in touch and share bits of our lives with each other.