“The Feathered Threat” or “Getting Goosed on Campus” 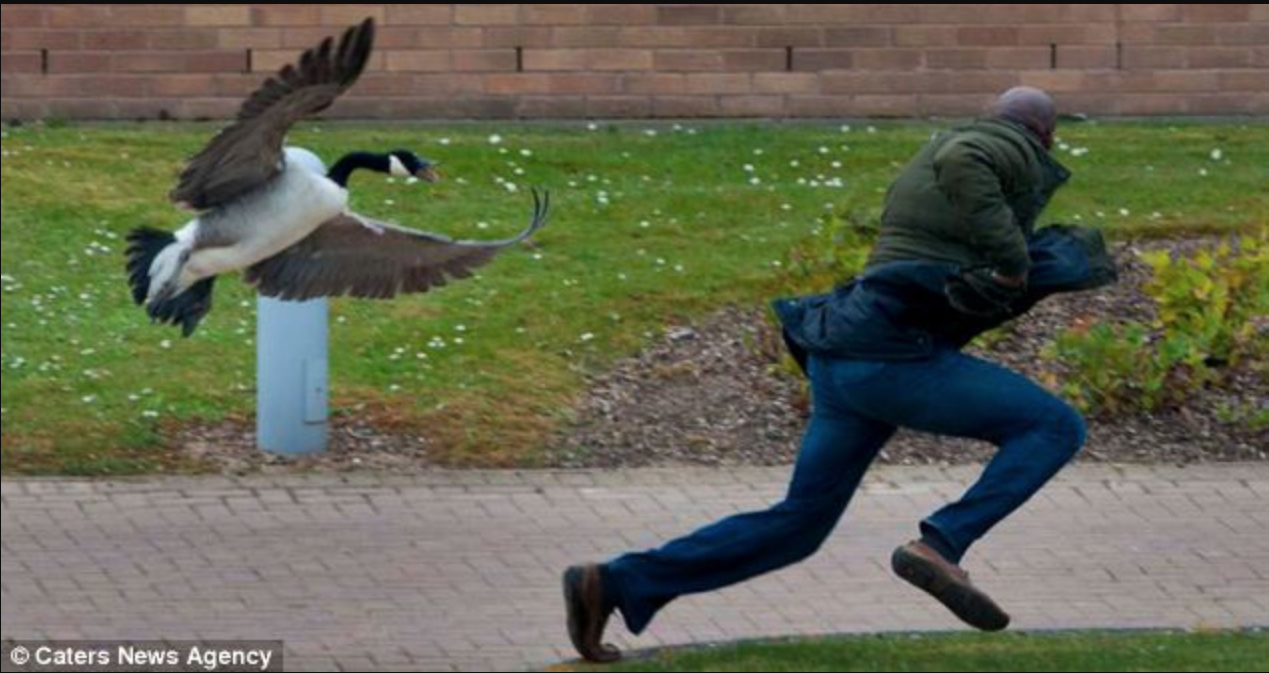 Their taunts and jeering can be heard around the clock. They invade our bushes and flower beds. They litter relentlessly. They crowd the walkways connecting our fair campus, and they will attack without provocation or regard for the sanctity of life. They are waging war on Henry Ford College and we are all in grave danger.

Merriam-Webster defines a goose as “a large waterbird with a long neck, short legs, webbed feet, and a short broad bill. Generally geese are larger than ducks and have longer necks and short bills.”

Some students at Henry Ford College disagree with that definition.

“They are disgusting creatures that attack at the drop of a pin and eat our grass,” said Ned Bentley, a full time student at HFC, “I think they are running some kind of drug ring in their so called eggs.”

Bentley is not the only person among student and staff to feel this way. Many students have stories of alleged verbal and physical assaults.

“I was walking by the parking lot and was chased by a goose. The goose chased me in between two cars and nipped at my legs. I couldn’t find my phone after the incident,” said Abigail Minor, a nursing student. “I thought the goose stole it. It was in my car though.”

The Canadian Goose is the largest goose in the world and can weigh over 20 pounds. The Canadian Geese in our area do not migrate, our temperate area doesn’t freeze the bodies of water for long and their food supply of aquatic plants, small fish and other aquatic creatures, grains, and grass remains intact year round.

HFC’s campus has vast plots of grass that spread as far as the eye can see… the next building. These bladed fields of green are exactly what draws the geese into our home; they love the stuff. One can observe the geese gorging themselves daily throughout the campus terrain.

“Grass is for looking at! Not eating,” shouted David Placard, full time student and the president of the Wrong Wing Coalition and Student Task Force (WWCST), “We shouldn’t be forced to lose our finite resources to Canadian Geese: they aren’t even American! Go back to Canada!”

Placard was speaking to a massive group of protesters that claim to be scared for their lives. The number of people that attended was in the hundreds with concerned parents and religious leaders from the surrounding community all flocking for answers on the invasion and attack on our campus life. If you missed the crowd, it was simply because you weren’t on the campus at the time of the event.

“It is not just the grass consumption that causes concern. They poop everywhere. Last week I was rushing to class and wasn’t paying a lot of attention,” Shanita Rockwell says through a shaky voice and tears welling in her eyes, “They leave poops everywhere. I stepped in a geese poop. I stepped in really stinky geese poops and the student next to me moved away. He thought I pooped my pants. It was horrible. These disgusting animals need to leave!”

Rockwell’s story is far from uncommon and even further from the worst. Many people that dare to traverse the campus streets and shadowy walkways with hopes and aspirations of completing a college program are doing so with great risk to their physical and mental health.

More frequent than the random and unprovoked goose attacks is the verbal threats and harassment. Honks and hissing fill the air all day and into the night. They rain down on bipod commuters traveling from class to class like bullets in a war zone. Little is known about what these honks mean, but some believe they are cries of violence and threats of “taking over” the campus from the humans.

Some also believe that the aquatic birds are threatening to kidnap and murder current and future offspring of the “Two Legged Ones.”

“I was walking into K building for my literature class just this morning and the gander near the flower bed was standing on one flipper in a very predatory manner,” Samantha Cider, full time student recalls, “He started screaming at me, ‘I will eat all of your babies and steal your riches, filthy human’ for no reason. I was only trying to be nice and he flew off the handle.”

Placard is a proud activist that is calling for all Canadian Geese to go back to Canada where they belong. He claims that the nests being built are not for hatching babies but for trafficking drugs through the borders of HFC campus into the community, into innocent children’s hands.

“These so-called ‘nests’ are nothing more than crudely constructed drug dens and the oblong spheres inside of these dens are packed with illegal drugs,” said Placard at his WWCST rally, “We must stop the poisoning of our fathers and mothers and children. We must eradicate the vermin from our land. This is human land. We must usher in a new age of security and safety from these vile creatures.”

Placard also claims to have “very convincing” evidence that the flock is also involved with human trafficking and the threat to our children is very real. He will release the identity of his source once he knows that the source is assured safety.

The student body is choking with fear of what might happen if this occupation of our land is allowed to continue. What does the flock want? Are they harboring dangerous drugs on campus? Are they going to steal our children away in the night and sell them to prostitution? This reporter braved the violence to get answers straight from the source.

Baron Von Gooseknuckle is the lead gander of the horde of geese known only as “The Flock” and I managed to ask him the questions that society wants answered, needs answered.

“We aren’t after anything but grass and babies,” Baron Von Gooseknuckle said, “We just want to be left alone to grow our families. If you get too close we will retaliate. We have just as much right to be here as the “two-legs.” In fact, I call the bipods the invading species. Constantly filling in water bodies and cutting down trees to build more homes. The humans are like a venereal disease; they will just keep spreading if they go unchecked.”

Through the not-so veiled threats, one thing is clear, the geese have no plans of going anywhere.

“How would we steal your babies,” Gooseknuckle asks of the allegation of human trafficking, “We don’t have arms or fingers. This is complete fear mongering done in part by the Wrong Wing Coalition. They will stop at nothing to fulfill their agenda.”

Though Gooseknuckle denies these claims it is hard to deny the turf battles that have erupted among rival geese packs. One such attack happened between the Gooseknuckle flock and the Muddlefoot string. Three students claimed to have been injured in the crossfire.

“Honker Muddlefoot used to be a friend. He was even the “Best Gan” at my marriage to my old lady,” Gooseknuckle recalls of how the feud started, “Muddlefoot was roaming the grass plains of HFC and starting munching on my turf. My goose, Amelia, confronted Honker and Honker lashed out. Honks and hisses were slung. Beak nips were nipped. Before long there was no going back. The humans were just collateral damage; it was nothing personal.”

With such violent flock clashings, it is no wonder that students and staff are terrified of the winged menace.

“The goose, most notably the gander, or male, is a fierce protector of his mate and offspring. Their nest is typically constructed of vegetation lined with their own down feathers,” Dr. Erica Featherbottom, professor of zoology and campus expert said the geese’s proclivity for violence is nothing more than their need to protect themselves. “The goose will lay anywhere between 3 and 7 eggs in a clutch and incubation is done solely by the female,” Featherbottom said, “During the 25 to 30 days of incubation the gander can be extremely temperamental. Just give them a little space and you should be fine.”

“I think geese are just looking for a place that provides the essentials for life; water, food, and a safe place to raise their offspring,” Featherbottom says, “these ‘Canadian’ geese are from here. I suppose a more accurate term would be to call them “Canadian-American” geese.

Featherbottom is a wildlife advocate that some say would rather see animals take over the world. Others say she is on the Flock’s payroll. She is a self proclaimed advocate for geese rights and wrongful prosecution. She is a aptly named a “Goose Feather” which is a derogatory term the Wrong Wing Coalition uses to indicate someone that denies the threat of the invading geese.

Dr. Featherbottom refutes the claims that geese were involved in drug and human trafficking.

“Again, they are birds,” Featherbottom says, “They can’t expletive talk!”

Whether or not the geese are a dangerous gang of violent criminals may still be up for debate but we know somethings for sure; the geese are becoming increasingly violent.

Placard claims to have a plan for how to contain what he views as illegal migrants. “We build a dome around the entire campus,” Placard says, “and we deport the geese back to Canada where they belong.”