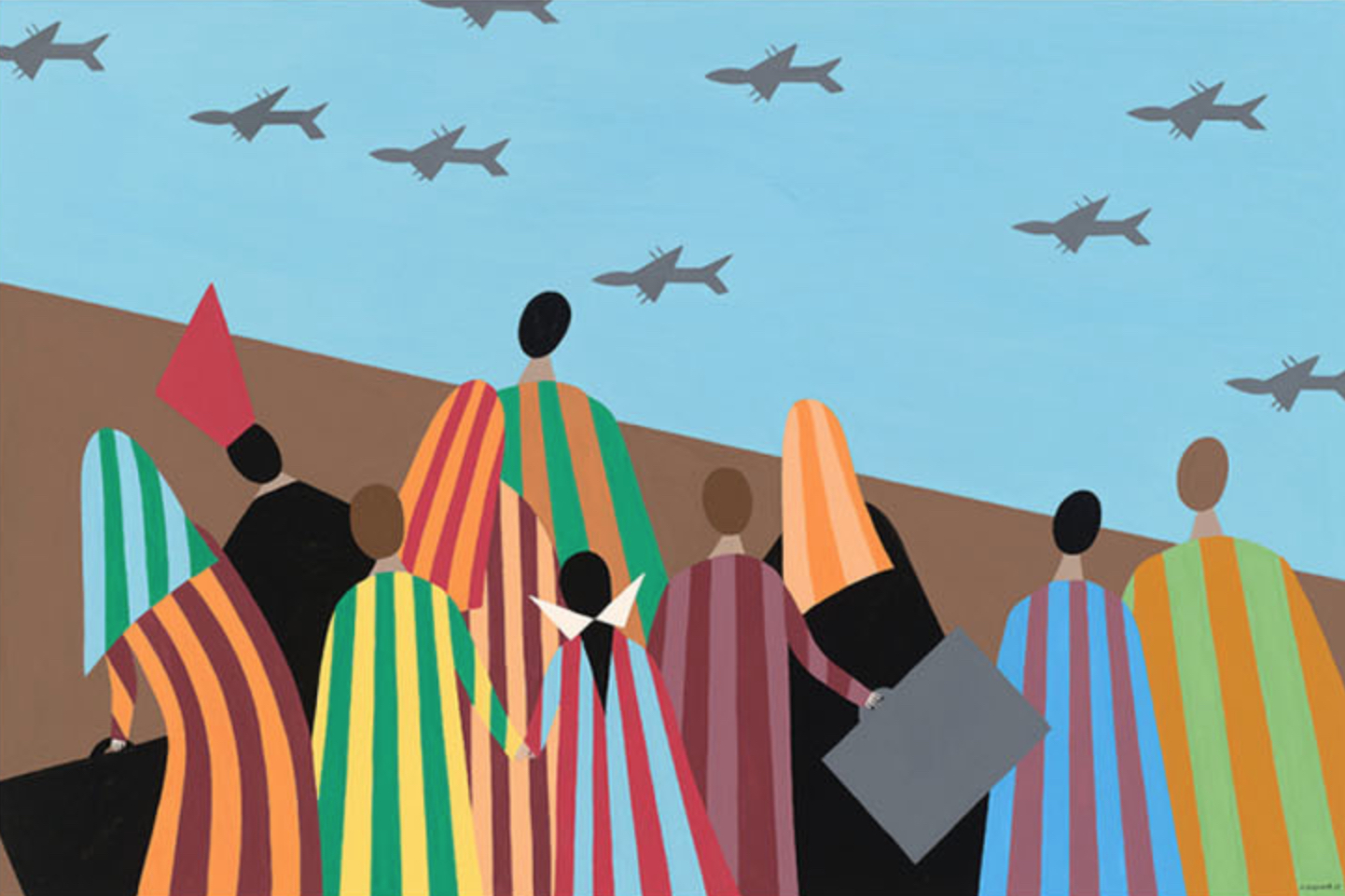 The exhibit, “The Far Shore: Navigating Homelands” at the Arab American National Museum in Dearborn features works by artists - Reem Bassous, Melissa Chimera, John Halaka, Rania Matar, and Helen Zughaib. These works are paired masterfully with poems by Hayan Charara, Sharif Elmusa, Haas Mroue, Adele Ne Jame, and Naomi Shihab Nye. The thematic thread shared between the paired pieces and poems are the sense of displacement and survival. These immigrant stories capture the essence of various migrations, across shifting borders and changing identities. The exhibit was guest curated by Melissa Chimera, one of the artists in the show.

The curator, Elizabeth Sullivan explained how Chimera came to the museum with the idea to capture “the political upheaval in the period following World War I, which resulted in mass displacement within the Arab world, and ended up creating a really large Arab diaspora.”

The artists were masterfully paired with poets who also worked around themes of “displacement, creating that home space and keeping ties with your roots.” Sullivan goes on to explain, “The poem is displayed next to the work. So you can read the poem and enjoy the work and kind of reflect on those two things together: how the visual art work fills in the spaces of the poem and how they speak to each other.”

Walking into the exhibit space, on the right you see Helen Zughaib’s collective pieces titled “The Way We Were” #9, #10, #11, and #15. The geometric patterned and warm-toned pieces depict the empty and deserted traditional sitting areas of Syrian living rooms. The accompanying poem by Naomi Shihab Nye, titled “The Art of Disappearing,” reflects on themes of abandonment, restlessness, and detachment. Nye writes, Nye’s first line reads, “When someone recognizes you in a grocery store...nod briefly and become a cabbage. When they say, ‘Don’t I know you?’ say ‘no,’” which is followed with, “When they invite you to the party...remember what parties are like...before answering.” This pairing with Zughaib’s artwork captures a treasured past, a savory moment in time, that won’t come again.

The next collection of artworks is also by Helen Zughaib, titled “Syrian Migration” #1, #8, #9, and #11. The accompanying description provides insight, stating, “Inspired by artist Jacob Lawrence’s Migration Series (1940-41) paintings depicting the Great Migration of African Americans, Zughaib’s series references the Arab Spring, Syrian Civil War and their aftermath.” The four vivid and vibrant pieces portray the challenges migrants underwent to get to places like Turkey, France, and Germany. One artwork has various shades of blue waves swirling, and encompassing travelers on a boat, while another shows the separation of Arabs in various immigration lines, and a third has a blackboard with the words, “Open the borders” sprawled across it.

Sullivan explained how everyone is drawn to Helen Zughaib’s pieces, as they are “very colorful and very relatable.” The “Syrian Migration” series has won a number of awards. Sullivan said, “The public is responding to these pieces, very relatable, easy to understand the message she is going with in the series. Her topics are more relating with the current Syrian migration. So we get into current events here, which is very relatable to people.”

The painting, “Echo,” by Reem Bassous references her journey between her Lebanese homeland and her current life in Hawaii. The exhibit explains how the painting and accompanying poem, “Mother and Daughter,” by Hayan Charara, “speak to migrants trapped between two worlds, old and new, home and foreign.” “Echo” uses darker and dulled out colors to capture the disheartening mood. The title “Echo,” similar to the ripples in water, emphasizes the attachment yet distancing of this faint memory from the past. The greys and blacks within the painting in the sky, the buildings, and the ground capture a certain brokenness. In the poem, Charara captures the emotional final moments and exchange between a mother and daughter drowning. Charara writes, “The water is dark...My clothes are getting heavier...The water is up to my chin now...please, she says, hold on longer.” This poem references “the migrants attempting to cross the Mediterranean Sea - sometimes unsuccessfully.”

“Rooted/Uprooted” by John Halak is an eccentric sculpture with a combination of various materials put together: an orange ladder, a wooden bark, varying sized circles on the ground, and two mirroring dark-green wooden panels of an orange carved downcast figure with slumped shoulders. The entire artwork is created by burn marks on wood panels and oil. Halak’s sculpture is paired with Sharif Elmusa’s poem. “Roots.” The museum describes Elmusa and Halaka as Palestinians “who are critical of the occupation of their homeland and resulting forced displacement.” The museum description continues to explain that with Elmusa’s poem as a reference, Halaka’s artwork can be seen to explore “how immigrants seeking a better future often fall into participating in settler-colonial activities.” Halaka, states, “Our histories of forced displacement are linked through surviving cycles of theft, denial and neglect, as well as our mutual struggle against colonial oppression.” Elmusa’s poem, “Roots” starts with a quote by Attila József, “Home is where people can read your name correctly on the tombstone.” The poem captures the culture, the satisfaction, and the pull between his homeland and his life today.

Sullivan explained how she was delighted to “bring together different types of art. We have photography, painting, this installation piece, all in one room. I think it gives people a good idea that Arab Americans have different mediums in which they work. So it’s not just like everyone is doing calligraphy, or pottery, something like that. It runs the gamut that each have their own style, own vision, and drive.”

The diversity of artistic approaches is made apparent with the photographs by Rania Matar from the “Invisible Children” series. Matar’s photographs document “displaced Syrian and third-generation Palestinian children living in Lebanon.” Accompanying these photographs is Haas Mroue’s poem, “Arabes Despatriados” about exiled Arabs. In the “Invisible Children” series, one photograph features a young rugged and toughened boy, named Mohammad, standing before graffiti, while the other is of a young innocent-looking girl named Reem, standing in front of a model wearing a pink floral dress for a fashion company called Vera Moda. Mroue’s poem is written from the perspective of a young person discussing the triumph, the achievements, and the descriptions of their ancestors. The first line states, “ No one believes me when I say my ancestors found America...They traded with Israelites, Assyrians, and when they landed on the new continent did not cry out India!...hilly cities facing the sea, facing west, where they built houses and pressed olives.” In the second line, Mroue writes, “My ancestor built Granada...carved water canals in the earth...before they were discovered by the New World...before they were labeled Hungaros.”

“Turn Your Back” by Melissa Chimera is paired with her mother, Adele Ne Jame’s poem, “Longing For Winter (For My Grandmother).” Chimera’s mixed media piece is vivid blue and red, sectioned off, patterned with ink and oil on silk, canvas, and linen, depicting her relatives. The accompanying text explains “her use of the silk calls back to the silk factories in Lebanon, where her family originates, and which her mother Adele Ne Jame discusses in her poem. The damask floral patterns references the sewing Chimera’s great grandmother Adele Ferris did as a paid laborer and for her family.” The contrast between the colors add vividness with a delicate touch in the patterned and floral background. Jame’s poem captures the essence of how her grandmother would “work late winter afternoons in the parlor, the Singapore lamps burning dark yellow...the outline of her body...Standing there, in the hypnotic light of that room...fitting the seams, how often I would hear, derri daharik, “turn your back” in Arabic...the firelight of the heart where every loss in known in advance.” This exchange and description of her grandmother captures childhood memories and shows how she reminiscences how her grandmother would work.

Sullivan explained how, mother and daughter Adele Ne Jame and Melissa Chimera have worked together before in the Arab world. This resulted in Chimera wanting to pair painting and poetry: “Thinking about this idea of a larger show that did that kind of thing. So that was like the brainchild, a starting point for her to start thinking of this larger show.”

Sullivan observes, “This particular exhibit gets to bring in some thicker events.” She hopes the exhibit will educate people “about how there is still displacement and the Arab world’s issues are still affecting civilians today and that we should reflect on the effect on them and what we can do and how that affects us here in the US.” Sullivan said, “I hope everyone will come and see the exhibit and the whole museum if they’ve never been. We are almost 15 years old and we really just like to get visitors in the door to hear different Arab American stories. We try to be a good representation of the huge diversity within the Arab community. So we hope that people will see themselves somewhere in these stories.”