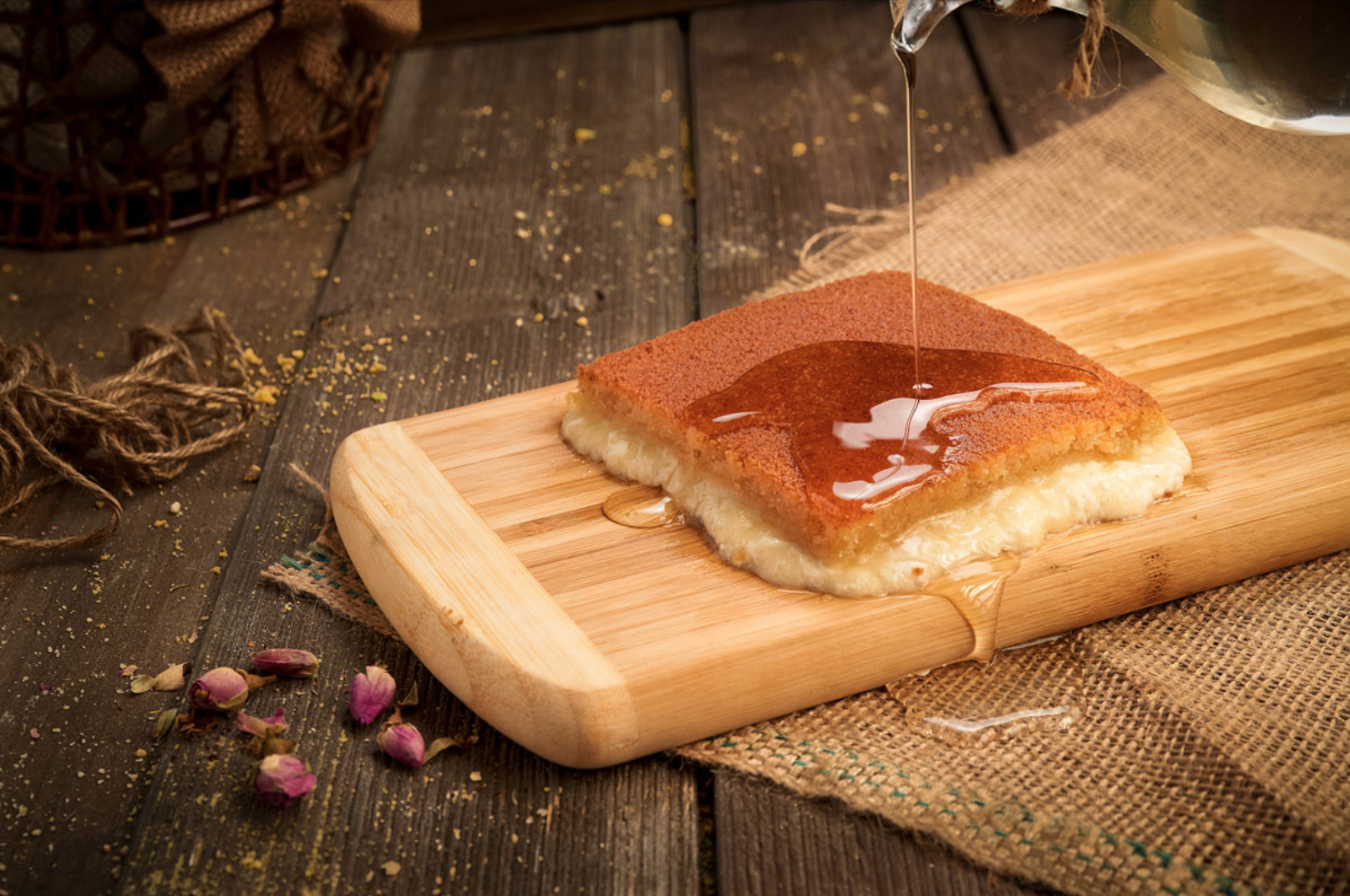 Knafeh, kunafa, or kanafa—all are slightly different in spelling and pronunciation but are variations of the same Middle Eastern dessert. Like any multicultural dessert, the taste slightly differs from one family recipe to another.

According to Adriana Murra from Arab Americans.com, kunafa originated in Nablus, Palestine, and from there its roots spread to the Arab World. In the present day, metro Detroit has the largest concentration of Arabs outside of the Middle East; and one way for them to keep their culture alive and introduce Arabic tastes to Americans was to open bakeries that serve authentic Arabic desserts.

One bakery that many in metro Detroit may already have heard about is Shatila Bakery. Riad Shatila, who passed in 2013, opened his first bakery in 1978 in Dearborn, and grew the business to an international success.

According to BonAppetit.com, “Shatila, who’d never baked or cooked professionally before, decided he would open a bakery on a dusty stretch next to a movie theater and a local supermarket.” However, Shatila worked very hard on his baking skills and recipes day and night until his bakery became known around the world and became a tourist attraction many who visit Dearborn.

Shatila is best known for its baklava, a dessert made of honey, phyllo dough, and pistachios.. Now the bakery sells all kinds of Arabic sweets, from baklava, to knafeh, to Middle Eastern flavored ice creams as well as pastries and cakes. They also offer vegan and sugar free products. Given its popularity, Americans may first see and maybe try kanafa at Shatila.

In her book, Khanafer describes when she made the traditional Nablusi Palestinian version of kunafa to guests who already loved her Lebanese version: “We argued over which version is better, the Lebanese or the Palestinian version! I guess it takes a bit of hubris to decide which is the best, especially for a recipe such as knafeh/kunafa! Both are simply amazing.”

Another Lebanese bakery in Dearborn, Lebon Sweets was a family business back in Lebanon. Lebon Sweets specializes in homemade Lebanese pastries, especially the kanafa sandwich, which they call the “Cheese Dome.” The kanafa sandwich is a popular Lebanese breakfast, but the way Lebon Sweets makes it is unique. Moe Majed, one of the owners, says,“My brother is behind the whole thing. He is the chef. He made the recipes.” Majed continues, “He had an idea of kanafa store only.” However, people started demanding more sweets, and that is why they have other Middle Eastern sweets now. Majed explains that kanafa goes back three to four hundred years ago. Back then it was mostly known as a Ramadan treat, but as the years went by, kanafa modernized and now people have it for breakfast, or as an afternoon snack.

Masri Sweets is a family-owned business that first started in Nablus, Palestine, and was called “Bierouti.” The owner trained all his sons the trade. So when Khader Masri, one of his sons decided to move to the U.S. in the 1970s and was an accountant at the time, he decided to keep the tradition his father started. “He went back to his roots,” said Khader’s son, Khaldon. Khaldon’s favorite way to describe kunafa is by telling people it is a “sweet cheese pizza.” According to Khaldon, when you eat kunafa you get, “explosion of flavors in your mouth,” so “you either like it or love it.”

Masri Sweets is best known for their Nablus kunafa. The bakery has joined Uber Eats, so you can have their kunafa delivered. The best part of the kunafa, however, is watching it be prepared, and cutting it while the cheese melts to enjoy the delicious authentic Palestinian kunafa the way it is meant to be eaten.

From Shatila, to Lebon, to Masri, each bakery represents something special about the Middle East. The smell, the taste, the art work on the walls, the vibes, all of these gives any patron a great insight of what the Arab world feels like. Going to any of these bakeries, you will see tables packed with families and friends laughing while enjoying some of the best Arabic pastries and desserts in metro Detroit.