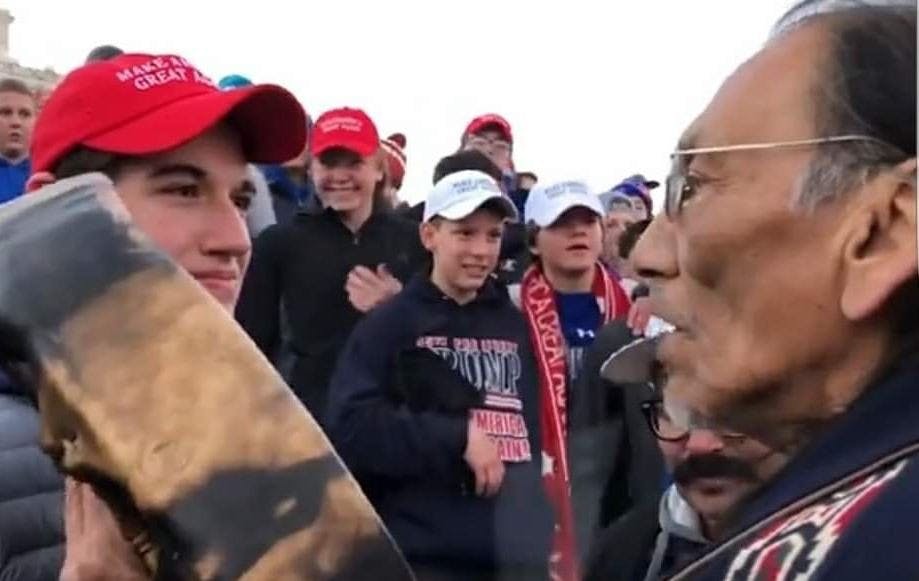 A Twitter video showing Nathan Philips, a Native American military veteran of Ypsilanti, Michigan, and a group of Covington Catholic High School students in Washington D.C., Jan. 18, 2019, has created quite a stir. The video began circulating on Jan. 18 and quickly gained national attention.

In the video one male student in particular is seen facing Nathan Philips, while the elder performs his song at the Indigenous Peoples March. Several high school students wearing hats with Donald Trump's slogan from his 2016 presidential campaign, “Make America Great Again,” can be seen chanting, “build that wall.”

The Roman Catholic Diocese of Covington confirmed the students were from Covington Catholic High School in Kentucky in a press statement published last week.

In a separate video posted by Instagram user "ka_ya11," Phillips can be seen saying, “I heard them saying ‘build that wall, build that wall.’” He added, “This is indigenous land, you’re not supposed to have walls here. We never did for a millennia. We never had a prison; we always took care of our elders, took care of our children, always provided for them, taught them right from wrong. I wish I could see that energy. Put that energy to making this country really great.”

In an interview with NBC News on Jan. 20, Phillips stated, "I'm still trying to process it, who they were, who those young folks were, where they came from and who's bringing them up. Where were the chaperones?” He stated later in the interview, “It's going to take us all to come together. I'm about prayer, but then you have to have some action to go with it your prayer.”

Phillips said to NBC News, “That I do not know whether the boy in the video should be expelled from school, but the trip's chaperones should be fired. How did they allow these students to come to this point? Were they with them? Who was encouraging them?" Many comments on social media suggest people believe the high school students were encouraged to chant, "build that wall," by President Donald Trump’s “Build the Wall” and “Make America Great Again” campaign slogans, which could be seen on the students’ shirts, sweatshirts and hats. This is not confirmed by the students, school or archdiocese. Phillips stated to Fox 2 News of Detroit, "It's like we need somebody to blame for our failings, maybe our President is kind of ... feeding the fires of racism. Especially the building of the wall. Why do we have to build a wall on the southern border and not the northern border?"

Representative Debra Haaland, the first Native American woman elected to Congress, stated, "These young kids should be taught to respect their elders, that they're important. People, they're getting so bold with what they're saying and doing."

The March for Life took place at the same time and place as the Indigenous Peoples March. The Covington Catholic website and social media shows that students and faculty attended a separate rally.

The school has received many phone calls and emails about the incident. As of Jan. 18, the school has elected to disconnect its phone line. People on social media have claimed to have found the email addresses to the Covington Catholic High School principal and for the Archdiocese of Kentucky.

In response to the incident, the archdiocese and school released this statement on their website: “We condemn the actions of the Covington Catholic High School students towards Nathan Phillips specifically, and Native Americans in general, Jan. 18, after the March for Life, in Washington, D.C. We extend our deepest apologies to Mr. Phillips. This behavior is opposed to the Church’s teachings on the dignity and respect of the human person. The matter is being investigated and we will take appropriate action, up to and including expulsion. We know this incident also has tainted the entire witness of the March for Life and express our most sincere apologies to all those who attended the March and all those who support the pro-life movement.”

Nick Sandman, a Covington Catholic High School student at the event, in an interview with Savannah Guthrie on NBC's The Today Show, said he asked permission to start the school in a chant at the March for Life rally while waiting for the buses. The students were not directing the chant at Phillips.

In addition to contrasting accounts of what happened in Washington D.C., Phillips has been accused of being a pathological liar, including mounting evidence that he is not a veteran of the Vietnam War. According to Dan Lamothe of The Washington Post, “the Lakota People’s Law Project, described him as a Vietnam veteran in a news release and numerous media reports identified him as one afterward.” Phillips describes himself as a “Vietnam-times” veteran. Lamothe goes on to quote a service spokeswoman, Yvonne Carlock, as saying, “Phillips served from June 1972 to May 1976 in the Marine Corps Reserve.” Phillips apparently had enlisted under a different name, which made it difficult to verify the nature of his military service. Lamothe goes on to quote Carlock who said, “From October 1972 to February 1973, he was classified as an antitank missileman, a kind of infantryman.” Lamothe continues to quote Carlock who explained that Phillips “then became a refrigerator technician for the majority of his service.”

The Lakota People’s Law Project, an advocacy group, has since retracted its assertion of Phillips’s Vietnam service. Daniel Paul Nelson, a leader in the Lakota People’s Law Project, said in an interview that the group based the assumption of Phillips being a Vietnam veteran from previous stories. In an MLive video interview from 2015, Phillips says he was a “Vietnam veteran times,” and he served from 1972 to 1976. In a Jan. 3, 2018 video that is being circulated now on social media, Phillips is seen telling the Native Youth Alliance, “I’m a Vietnam vet” and “I don’t talk much about my Vietnam times. I usually say I don’t recollect. I don’t recall those years.”

This story was updated on Feb. 4, 2019, after its initial publication in the Jan. 28, 2019, issue of The Mirror News, since new information emerged regarding the Twitter video of Nathan Phillips and the Covington Catholic High School students in Washington, D.C., on Jan. 18, 2019. Contact Joshua Tufts: Jtufts@hawkmail.hfcc.edu. Follow him on Twitter @Joshua_Tufts