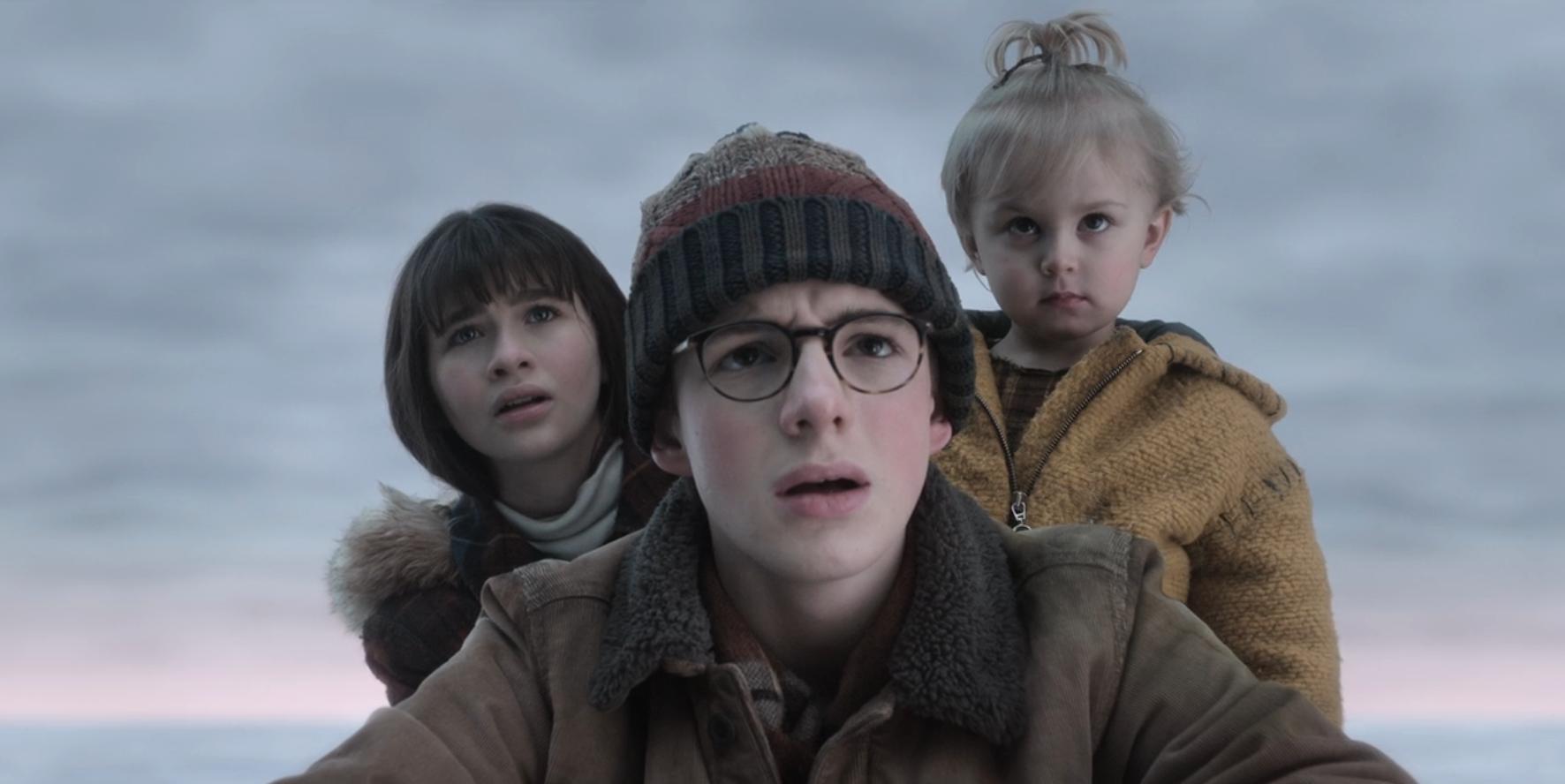 I encourage you to look away from the bitter sadness that is “A Series of Unfortunate Events.” Any fan of Lemony Snicket’s series will tell you that the story of Violet, Klaus and Sunny Baudelaire is not one with a happy ending, nor a happy beginning or middle. But if you wish to continue reading and watching, know that you have been warned.

My name is Abby Massucci and it is my duty to review the final season of “A Series of Unfortunate Events” created by Barry Sonnenfeld and based on the novels by Lemony Snicket, the pseudonym for Daniel Handler, who is one of the producers of the Netflix show. The final season details the last four books in the series: “The Slippery Slope,” “The Grim Grotto,” “The Penultimate Peril” and “The End.” Each story is more grim than the last, and will leave you questioning everything about the series.

The season begins where the last one left off, with Violet (Malina Weissman) and Klaus (Louis Hynes) careening down a slope in a carnival cart. Sunny (Presley Smith) is being taken away by Count Olaf (Neil Patrick Harris) and his disgusting theatre troupe. This begins the slippery slope they are destined to travel down.

Two of the best episodes take place in a large hotel called The Hotel Denouement, a fitting name for a place where the resolution of the series takes place. Every piece of the Baudelaire’s story has been leading up to this moment. During the first half of the two part episode, many familiar faces appear including Jerome Squalor, the children’s past guardian, Vice President Nero from Prufrock Prep, and a few of the villagers from the Village of Fowl Devotees. Unbeknownst to anyone, they are all about to be part of a trial for Count Olaf to finally bring him to justice.

During the series, the viewer is rooting for the Baudelaire’s, but when brought in front of an audience and questioned by Count Olaf, the children suddenly seem no better than the man they have been fighting.

Looks are deceiving when it comes to this series. Violet, Klaus, and Sunny may look like sweet innocent children, but they have done some things that are unforgivable. When pointing out that Olaf is the one who starts the fires, Olaf counters them with fires, literal and figurative, that they have started. Besides Count Olaf, the series introduces two new villains who are never given names, only descriptions: the man with a beard and no hair and the woman with hair and no beard. When these two first step on screen, you can feel a chill down your spine and the tension on screen. They are Count Olaf’s old mentors who are always in a bad mood and have no care for the safety of others, including, and especially children. They took Olaf in at his weakest point and twisted him into the man he became. The old phrase “some just want to watch the world burn” applies directly to them, in the more literal terms. They want chaos and destruction.

Count Olaf has always been seen as a greasy, loathsome villain. He is grotesque and rude to everyone, no matter if they are on his side or not. But with the introduction of his mentors, we see a side of Olaf that could not be possible: his humanity. Olaf is still just a child trying to prove himself to his superiors. All he wants is admiration and approval. Neil Patrick Harris perfectly portrays all of Olaf’s quirks and flaws, breathing life into this fictional character.

The most mysterious new character is Kit Snicket (Allison Williams), the sister of Lemony (Patrick Warburton) and Jacques Snicket (Nathan Fillion). An agent on the better side of the V.F.D. schism, Kit is in charge of getting the sugar bowl to The Last Safe Place. Not only is she carrying the sugar bowl, the device that began the schism between the two sides of V.F.D., but she also carries along another precious cargo: her unborn child. Kit will not lett her pregnancy get in the way of accomplishing her mission, even when several people are trying to stop her.

One of the more prominent characters this season is Sunny Baudelaire. She is finally able to speak, though still fairly limited, which lends much more to her helping her siblings and the idea that she is no longer a baby. During a pivotal scene in “The Slippery Slope: Part Two,” Violet comes to Sunny’s rescue, but Sunny knows that they will get nowhere if she does not stay behind and spy on Olaf. She continues to prove herself throughout the series, growing and maturing at only a rate a fictional toddler could. Some of the most amusing scenes have Sunny doing amazing feats for a toddler, such as cooking dinner for the crew of a submarine and arming a lock on a laundry room door.

Set design and scene coloring has played a big role in the series since the very beginning. All the way until “The Penultimate Peril,” the coloring of each scene, set, and scenery is very dark and gloomy to match the tone and feeling of each episode. As viewers are advised, there is no happiness and mute colors are contrasted with what would normally be vibrant spectacles, such as a circus musical where reds and yellows of the circus tent and costumes look dirty and drab.

When trapped underwater in a submarine, the biggest pops of color are the sailor suits, pink bubble gum, and Esme and Carmelita’s outfits. Extravagant costumes with bold colors make the viewers focus more on the people and not so much what is going on behind them, which for the attentive viewer will elevate the irony, and absurdity, of what the character is doing or saying. In the hotel, however, drab colors create suspense. Behind each hotel door is someone from the Baudelaire’s past and a new revelation. A chiming clock adds to the tension, like the hotel is talking to the Baudelaires.

On the island in the episode “The End,” there is color everywhere which is a contrast to the rest of the series. The vibrant colors of the island, the sun, the sand, the water, symbolize hope. Far, far away from their troubles, the Baudelaires finally have hope. Many things wash up on the island, most of them being from places the Baudelaires have visited, and they are all dirty and void of most color. Against the beautiful bright island backdrop, these items seem so small and out of place.

As with any book-to-screen adaptation, there are changes. With the 2004 film starring Jim Carrey as Count Olaf, there were too many changes made to be considered a faithful adaptation. But with the the Netflix series, there is an appropriate amount of differences that actually add to the story instead of detract. As someone who has read all the books, it is simple to point out any differences, but none of them are upsetting. It feels as if additions and subtractions that were made were originally written in by Snicket himself.

One of the biggest changes was made to the finale of the series. “The End” is a relatively thick book for a child to read but is one of the only episodes of the season without two parts. “The End” is one fifty-three minute episode. Trapped on a deserted island with Count Olaf locked in a cage, the children finally think they have found a safe haven, but everything is not as it seems. This is where the children take their final stand against corrupt adults and their twisted beliefs. In the novel, it is unknown what happens to the children after all events take place. But in the show, everything is wrapped up neatly in a bow. Fans of the book series have posted online mixed reactions to how neatly the Netflix series ends.

In the books, everything is a guessing game and we were never given answers about many mysteries. However, the show spoon feeds viewers all of the answers. Yes, it is nice to finally know the contents of the sugar bowl and what happened “that night at the opera,” but very little else is left to answer. Some say it was a good move to include all of Snicket’s missing facts, but others say it takes away from the overall narrative.

While the show is very dark and people do die, it feels like a much more saturated story void of the intrigue and subtle emotions the books conveyed. Count Olaf is much more grim in the novels. This is covered up with Harris’s more theatrical portrayal of the villain which makes his villainy, while still frightening, fluffed up. While no on-screen adaptation of a book can be as good as the original print, “A Series of Unfortunate Events” came very, very close. It is a shame that the Netflix series is over, and it is a shame that Snicket fans now have answers to questions left unanswered in the novels when they may have preferred to keep the mystery going.. If you so desire to watch this dreadfully fabulous show, you can flip over to Netflix and watch all three seasons right now.