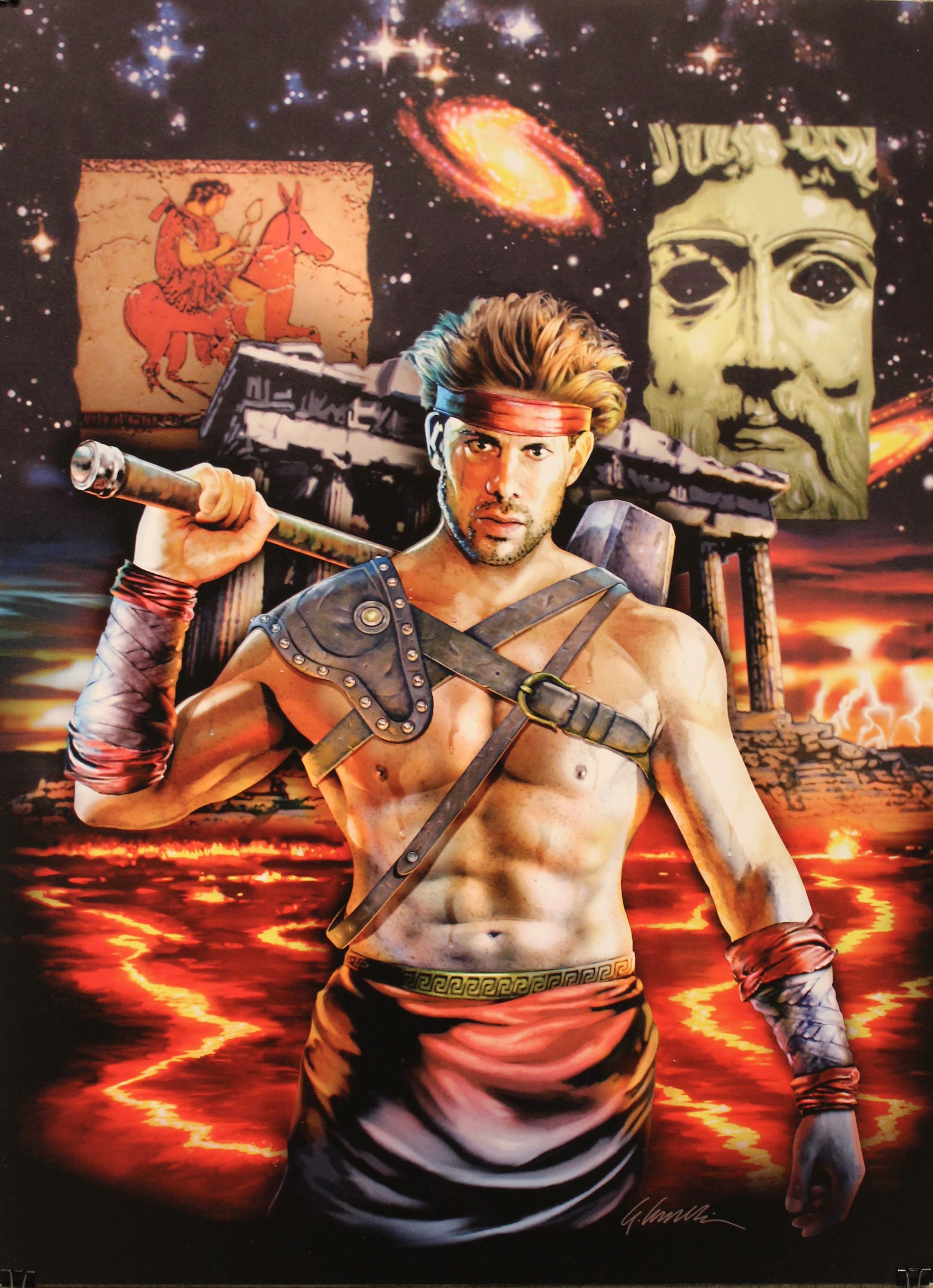 Star Wars, Spider-Man, beer steins, bonds and more are all on display at the Sisson Art Gallery on Henry Ford College’s main campus. Gary Ciccarelli is a life-long resident of Dearborn and for most of that life he has been doling out illustrations for a multitude of big-name clients. Chances are that you have seen Ciccarelli’s work at some point in your life.

Sisson Art Gallery is displaying an overview of his favorite work and there is a lot to behold. The gallery is full of items that would make any toy collector or comic book nerd salivate. There is a cover featuring a jacked turkey for Muscle Fitness magazine, a sexy Thor complete with hammer and a raging Spartan for the cover of a fantasy book named Gods and Goddesses.

Any eighties child will appreciate that Ciccarelli illustrated the box and pieces for the board games “Thin Ice” and “Double Dare”; both games were the source of hours of fun in my childhood as well as the source for a few thrown game boards, screaming fits, and open investigations of collusion.

Remember the infamous Heavyweight bout between Evander Holyfield and Mike Tyson? You know, the one where Tyson seemingly had the munchies mid bout and snacked on Holyfield’s ear. Ciccarelli illustrated the Caesars Palace promo poster for that title match.

Ciccarelli has been commissioned to create signature work for over 100 high-profile clients such as NASCAR, McDonald's, Microsoft, Nike, Coca-Cola, 20th Century-Fox, Ford Motor Company, and Target are companies among his repertoire of works.

His passion for fantasy art helped pave the way for him contracting a job creating original trading cards for the X-Men and Spiderman. Ciccarelli designed packaging and box art for countless toys including Spider-Woman, The Punisher, Dare Devil, and The Hulk. Ciccarelli has created several Star Wars book covers, including the cover of Star Wars: A New Hope as well as many children’s book covers.

Much of Ciccarelli’s work has become highly collectable due to several prominent jobs. One of these jobs was designing Budweiser’s annual holiday beer stein, the most iconic was that of the 2003 “Old Towne Holiday” that featured Budweiser’s trademark Clydesdale horses pulling a beer delivery wagon down the snowy streets of a fictional Main Street, America. The stein is accented with holiday decorations of garlands, holly, and pinecones along the bands.

There is a chance that you or a family member has Ciccarelli art work in your home. Somewhere in a file cabinet, a box in the closet, or in the bottom of the familial “junk drawer” could be a Ciccarelli piece that is mounting value even as you read this.

Ciccarelli is the first ever private citizen to be selected by the U.S. Treasury Department to illustrate famous Americans on savings bonds. The series-I savings bond, or individual savings bond, is a non-marketable, interest-bearing U.S. government savings bond. Grandparents throughout the eighties and nineties loved to gift these bonds to children and teens on holidays and birthdays.

The former Treasury Secretary Robert Rubin hand picked Ciccarelli out of a contest of sorts to become the artist for the savings bonds.

Ciccarelli was chosen by the U.S. Treasury Department because of his ability to illustrate in a realistic fashion.

“They were looking at a national group of illustrators and it came down to me and one other guy,” Ciccarelli said of the selection process. “We both had to do a sample of Martin Luther King and I didn’t even know I was up for this at the time. I did them a really nice sample. They looked at both and they picked me, luckily, because he did his in a pencil style and I did mine as an airbrush style which made it look much more realistic. When it came down to printing it, I had to do it in pencil because the airbrush style wouldn’t print. They almost gave the job to the other guy and I said, ‘No, no, I got this!’”

Martin Luther King, Jr. is a face found on the series-I bonds. King was chosen for being a civil rights leader and activist who gained respect and attention by influencing non-violent protests. He led the Montgomery Bus Boycott that lasted 385 days during which King was arrested, his home was bombed, and he was subjected to abuse and threats. The protest ended with the U.S. Supreme Court ruling that segregation on public buses was unconstitutional. He was instrumental in the organization of the Great March on Washington, one of the largest civil rights protests in history, which laid the foundation for the passage of the Civil Rights Act of 1964.

Helen Keller is another of the illustrations on the savings bond. Keller lost her sight and hearing at the age of nineteen months due to scarlet fever. With the help of her teacher, Anne Sullivan, Keller made tremendous progress communicating. In 1964, Keller was awarded the Presidential Medal of Freedom for fighting for disabled and women’s rights. Keller worked to make braille the standard system around the world.

Another civil rights face featured on the savings bonds is Dr. Hector P. Garcia. Garcia was an advocate for Hispanic-American rights during the Chicano movement. The first Mexican-American member of the U.S. Civil Rights Commission, Garcia was awarded the Presidential Medal of Freedom.

Chief Joseph is another notable portrait to decorate the savings bonds. Chief Joseph was well-known for his military genius and led his people, the Wallowa Band of the Nez Perce Tribe, in an epic fight across the Rocky Mountains when he and his people were being forced to a reservation. The Nez Perce refused to go. Doctors say that he died of a broken heart.

General George C. Marshall is another historic figure portrayed on the bonds. Marshall was named chief of staff at the beginning of World War II and is responsible for exponentially growing the U.S. Army. Marshall was pivotal in the planning and execution of Operation Overlord. Operation Overlord is better known for the bloody Battle of Normandy. After the war he created the Marshall Plan which was an initiative to aid in the rebuilding of Western European economies after World War II. The plan paid over $12 billion which is equivalent to $100 billion by today’s standards.

Marian Anderson is also featured on the savings bonds created by Ciccarelli. Anderson was one of the most celebrated American songstresses of the twentieth century. Anderson played a pivotal role in the struggle for black artists to overcome racial prejudice. She had an award created in her honor. The Marian Anderson Award honors critically acclaimed artists who have impacted society positively.

Sparks Matsunaga is the last of the notable Americans featured on the series-I savings bonds. Matsunaga was famous for serving in the Senate from 1977 until his death in 1990 and for his witty sense of humor. One most notable indication of his humor was when Secretary of State Alexander Haig confused him for a Japanese delegate during the Japanese Prime Minister visit in 1981. Haig asked Matsunaga if he spoke English and Matsunaga replied, “Yes, Mr. Secretary, I do, and I had the honor of voting for your confirmation the other day.”

Ciccarelli was honored in Washington for his portrayal of these American heroes. Ciccarelli has been a professional illustrator for over 45 years and he has some advice for budding artists looking to travel down a similar road.

“Just keep working at it,” Ciccarelli offers young artists, “Send stuff to everybody. You’re going to get shut down a lot and hear no for an answer but just keep trying. Just keep pushing at it. Work as hard as you can and develop a technique and style that is sellable. That helps a lot to.”

“I really enjoyed it,” Ciccarelli speaks of his career as an illustrator, “I do something I really like to do and make money at it which a lot of people don’t get a chance to do. I really enjoy what I do.”