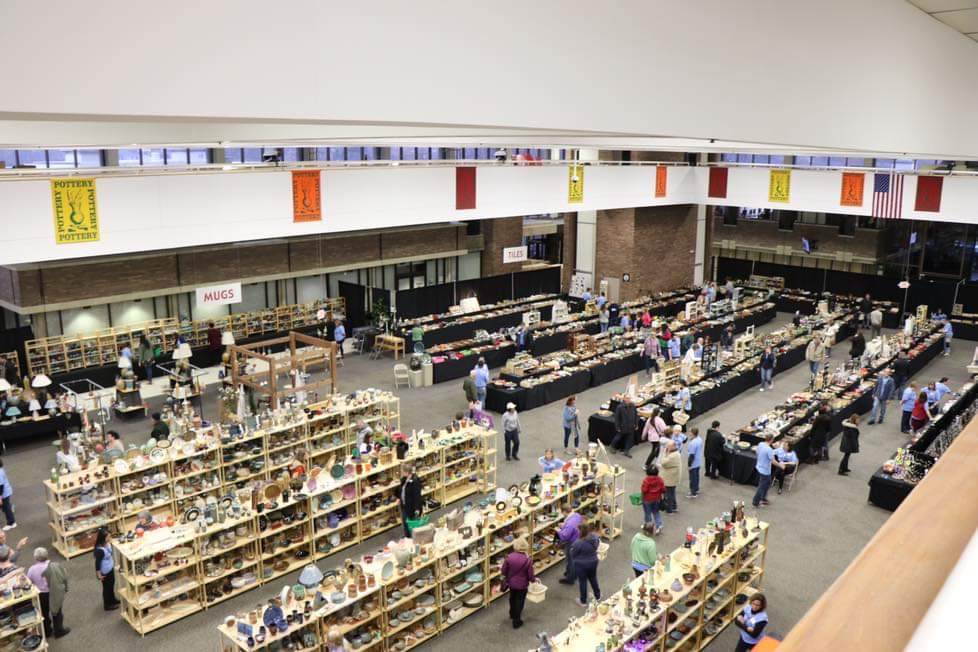 For the past 43 years Detroit has held one of the nation’s largest ceramic-only craft fairs, the annual Potters Market. It draws in over 8,000 lovers of ceramics, and this year brought forth 132 artists from all over the country, including three of Henry Ford College’s own: Irene Naida, Patricia (Patty) Goodell, and Paul Latour. It is a free show housed in the Southfield Pavilion on Evergreen Road, in Southfield, held during the weekend that follows Thanksgiving.

The market originated in the basement of a church with its founder Dr. Charles "Charlie" Blosser, along with a couple of his students, selling Christmas holiday wares in 1975. Dr. Blosser was a retired teacher of Ceramic Technology at Oakland Community College, at the Royal Oak Campus. Sadly four years ago in 2014, at 82 years old, Dr. Blosser died, but his Market would continue. In its thirty-ninth year, the market moved from Madison Heights to its current location at the Southfield Pavilion.

The Southfield Pavilion is one of Detroit’s premier exposition centers. It provides 17,000 sq. ft. of selling floor, allowing the aisles to be wider, as well as longer. This increase in aisle space allows more pottery on the sales floor, bigger areas for stock products, as well as gives the shoppers more room to shop. For most of the shoppers it seems like the shelves never empty, for when one piece is removed someone is there to restock it. There are four sections in the selling area: the shelved section that are each labeled for one specific artist; a section for mugs; a section for bulk pieces where the artist put out as much product as they can fit on the 36 inches of table space they are given; and a section for the jewelry and wearable pieces.

The artists bring in on average $400,000 each year, with its highest grossing profit $459,000. The current heads of the market have hope to bring in half a million dollars one day. Each artist brings in around $400-$7,000. HFC’s Patty Goodell brought in $1,200 from the market last year. Each year, the Market selects a charity to support with the proceeds from donated artwork from the participants. The charity chosen this year is Camp Casey, a non-profit that has provided horseback riding programs to children with cancer and rare blood disorders since 2004.

On average HFC has three students participate each year, with the constant being Irene Naida, who has participated for the past three years. This is Patty Goodwell’s second year, Paul Latour’s first year, and Diane Eberts has done it three times. Naida says she “enjoy(s) participating in the show because it is so rewarding when someone buys your work.” HFC’s ceramic program plans to continue to encourage students to showcase their pieces at the annual Potters Market for years to come.