DIA's "Ofrendas" is a Spirited Tribute to the Dead 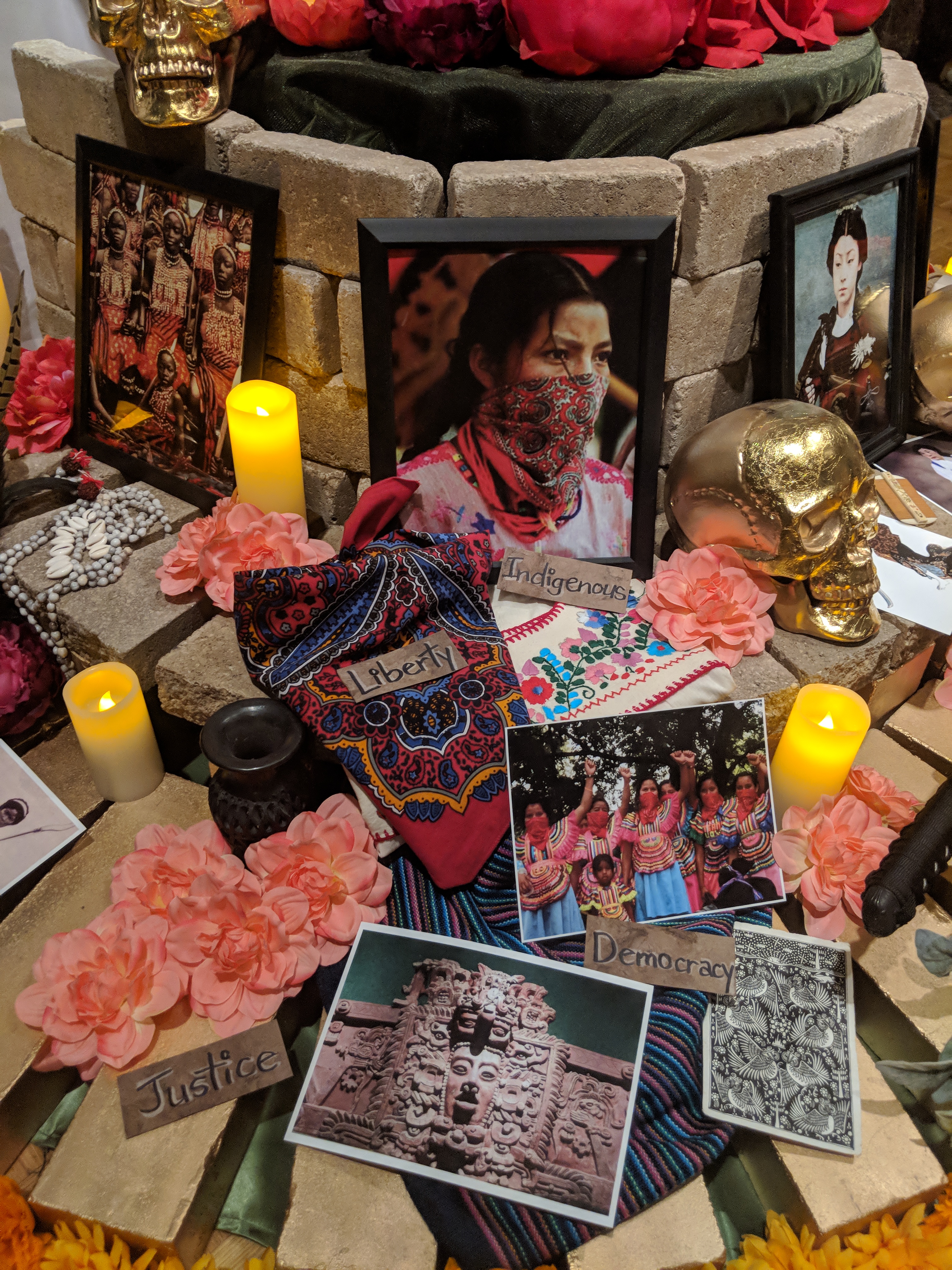 "Legacy of Bravery" by Pilar Côté. Photo by Jessica D'Alfonso

On Oct. 12, the Detroit Institute of Arts opened the exhibit, “Ofrendas,” in partnership with the Mexican Consulate of Detroit for its sixth year. The exhibition commemorates the Latin American holiday, “Días de Muertos,” or “Days of the Dead,” which are celebrated on Nov. 1 and Nov. 2.

Though many believe that el Día de los Muertos is the Mexican version of Halloween, the holiday is actually meant to celebrate the lives of those who have passed on. Speaking on National Public Radio on “Decoding the Food And Drink on a Day of the Dead Altar,” Karen Castillo Farfán says that the tradition originally dates back about 3,000 years, and was developed by the Aztecs who wanted to celebrate their ancestors lives, rather than grieve. Castillo explains that over time the holiday was influenced by Christianity, making it into the celebration it is today.

According to Tieanna Burton-Sharp of Opportunity Detroit, the first day of el Día de Muertos is known as “Día de los Innocents,” and is dedicated to honoring children. The second day – “Días de los Muertos” – is dedicated to adults. During both days, it is believed that the spirits of those who have passed are able to reunite with their families. The exhibit at the DIA is comprised of “ofrendas,” or “offerings,” which are altars to honor the dead, made by local members of the community. Ofrendas often display photographs of the loved ones who have passed and contain items that were important to loved ones.

There are also many overlapping elements of ofrendas. They are abundantly adorned with brightly-colored flowers. Marigolds in particular are regularly used, as the strong aroma and bright color are believed to help guide souls to the altars. For example, in Mario Alberto Martínez Méndez’s piece, “Alebrijes Also Celebrate,” La Catrina, the lady of death stands in a doorway made of marigolds, surrounded by “alebrijes” – colorful sculptures of various creatures.

Monarch butterflies are also prominent due to a belief that the souls of the dead return as monarch butterflies during Días de Muertos. This imagery is used heavily in Higo Gabarrón, Lorraine Ranchod and Rachel Martínez-Finn’s ofrenda, “Migration Home,” which is dedicated to women’s power. The placard on the wall nearby explains: “The monarchs’ arrival is distinguished by gentle breezes caused by their wings whose flutter gives a breath of life to love and memory.” Perhaps one the most widely-recognized ofrenda offerings is the sugar skull. According to Farfán, the colorful and elaborate skulls are made from pure sugar and often given to friends as gifts. She writes that the designs “represent the vitality of life and individual personality.”

A massive, vibrantly-colored skeleton horse toward the entrance of the exhibit commands attention, surrounded by several flowers. The piece is called “Grandma Mustang” by Michelle Krueger of Sterling Heights, who dedicated the piece to her mother, Judi, who passed away in January. A quote from her on a museum placard elaborates: “A life-long lover of horses, I want to believe her soul is now running wild and free like a mustang.”

Another large, vivid piece covered with marigolds and including a skeleton woman sewing is called “Day of the Dead – Beyond the Earthquake,” made by the Friends on Board Foundation in Canton, which is meant to commemorate the “thousands of forgotten seamstresses working under terrible conditions in assembly plants in Mexico City who lost their lives in the devastating earthquakes of 1985 and 2017.” The piece specifically calls attention to two prominent women: Juanita Huitron, founder of International Rescue Group September 19-Topos, and Evangelina Corona, leader of the Seamstress Labor Union of September 19.

The ofrendas on display at the DIA this year spotlight women in particular. In addition to “Migration Home” and “Beyond the Earthquake,” a personal favorite of mine, “Legacy of Bravery” by Pilar Côté of Detroit highlights women’s leadership. A placard on the wall explains the reasoning behind this altar: “Countless women have played a vital role in our history; their legacy and bravery should never be forgotten.” The middle of the ofrenda is a statue of a woman, surrounded by photos of various women from diverse cultures, including the onna-bugeisha (female samurai), Lakota women, women of the Black Panther Party, the Ahosi of Dahomey, and the Zapatista Guerreras.

“Ofrendas” provides an incredibly intimate, profound look into the lives of many local people. The beautifully detailed altars give a slight insight into another culture’s tradition that is often superficially thought of as a second Halloween. However, el Días de Muertos is much more than that – it is a thoughtful tribute to those who have passed on.

“Ofrendas” runs at the DIA until Nov. 11. General admission to the Detroit Institute of Arts is free for residents of Macomb, Oakland, and Wayne counties.