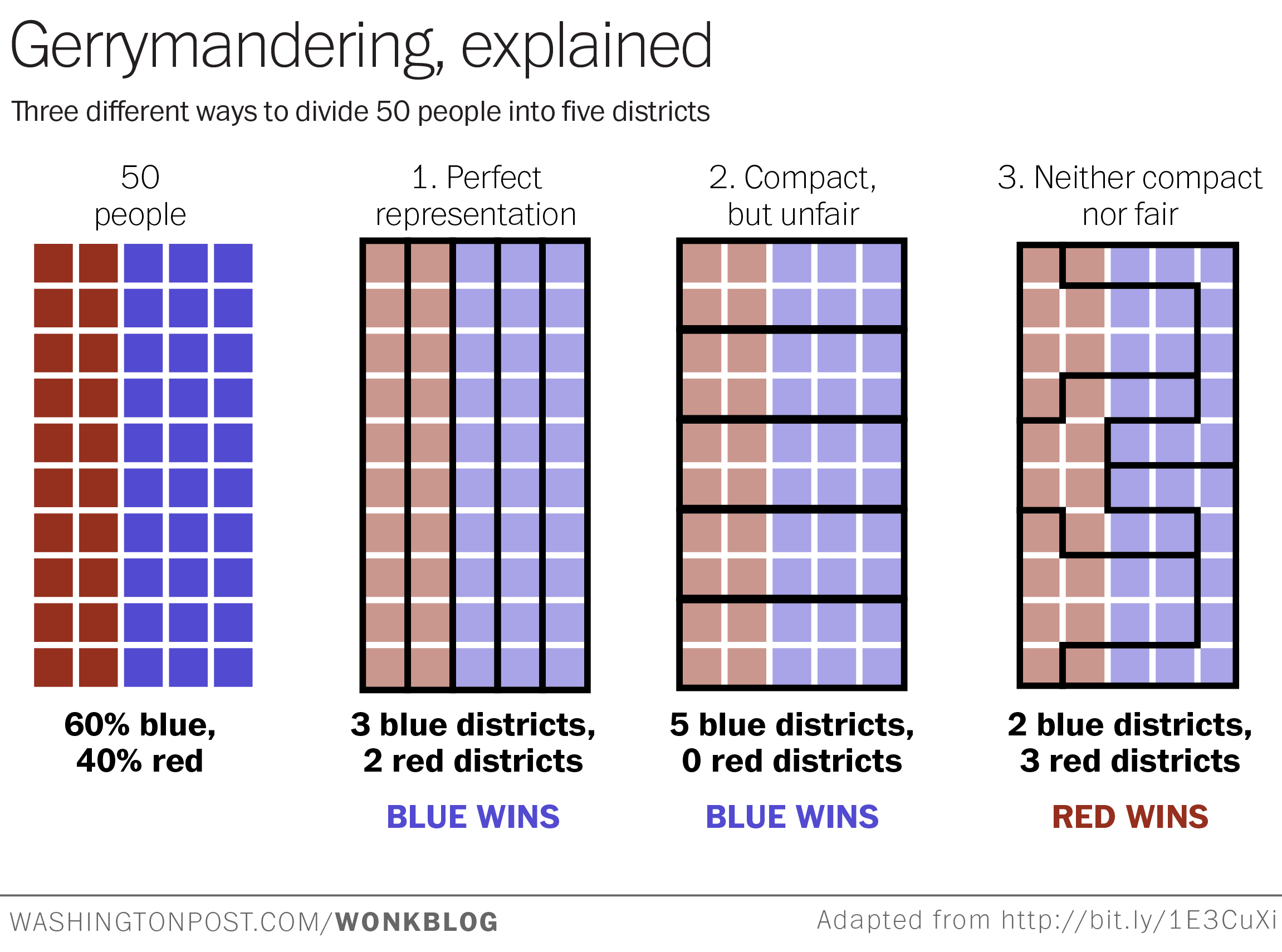 This November, voters across Michigan will have the opportunity to place the power of redistricting congressional and legislative districts in the hands of an independent committee.

The ballot measure has been proposed by the organization Voters Not Politicians who, as reported by MLive’s Julie Mack, have been working for over two years to get the proposal approved by the Board of State Canvassers.

If passed, the Prop 2 would amend the Michigan Constitution to transfer redistricting powers over to a 13-person independent redistricting committee made up of citizens, not politicians. The committee would consist of 5 independents, 4 Democrats and 4 Republicans. A similar committee was established in California in 2008, leading to a “large incumbent turnover,” according to FairVote.

Although the proposal will establish an independent committee, there will still be government oversight. Emma Winowiecki of Michigan Radio reports, “The Secretary of State will be charged with making sure it runs effectively, including choosing qualified applicants at random and enacting the commission’s redistricting decisions.” The Secretary of State will be tasked with providing applications for citizens to be placed on the committee, as well as sending out 10,000 applications to registered voters. Citizens selected will reflect the “geographic demographic” of the voting population of Michigan.

Winowiecki reports that there are stipulations on who can serve on the committee. Committee members must be registered voters and cannot be either elected officials or have been nominated by a political party for any office within the last 6 years. Those who are a direct relative of anyone who holds office are also barred from serving.

The committee will have access to consultants and experts to assist in their decision making, and as Winowiecki states, “The public will have plenty of input. The proposal requires a minimum of 15 public hearings throughout the planning process.”

Voters Not Politicians is currently active at the Henry Ford College campus, urging students to pledge to vote for Prop 2. The organization describes itself as a “nonpartisan, grassroots group leading the charge to fix Michigan’s broken redistricting process.” The group claims that their proposal is “fair, impartial and transparent,” and insist that the new redistricting process will be carried out in public meetings, and all documents used to create the new districts will be published for the public to see.

As of now, the Michigan state legislature controls the power of redistricting. The last redistricting took place following the 2010 census and was based on recommendations by Republican consultants. Many in Michigan have accused the legislature of carrying out partisan gerrymandering.The redistricting process allowed the Republican majority a non-representative advantage in the elections.

The two major techniques used by a state legislature when gerrymandering are “cracking” and “packing.” Cracking is when supporters of the opposition are scattered across voting districts in such a way that insures that they are the minority in their voting district. This insures that the party in power retains a majority support in as many districts as possible. Packing is when supporters of the opposition are packed into as few voting districts as possible, while the remaining districts are made up of mostly supporters of the party in power. Through this technique, a party in power can gain control of the majority of seats in the state legislature and their state’s seats in the U.S. House of Representatives while not obtaining a majority of votes in the state. In practice, state legislatures use a combination of these techniques in their state to secure their party’s victory and control over the state.

According to the Princeton Gerrymandering Project, Michigan is one of the most gerrymandered states in the country. Despite Democrats earning 50 percent of the vote in 2016, Democrats only secured 5 out of the 14 possible congressional seats. The study concludes that Michigan has been gerrymandered to give the Republican party an unfair advantage in state elections.

Joel Kurth and Lindsay VanHulle of Bridge Magazine report that emails have been released by a current federal lawsuit by the League of Women Voters that claims Michigan Republicans purposefully engaged in partisan gerrymandering to ensure victory in state elections. “The lawsuit references private emails that allegedly show one Republican aide saying a Macomb County district is shaped like ‘it’s giving the finger to (Democratic U.S. Rep.) Sandy Levin. I love it.’ Another email from a GOP staffer was said to brag about cramming ‘Dem garbage’ into four southeast Michigan congressional districts.”

The report continues in another email, “a longtime Michigan Chamber of Commerce executive predicts the maps will keep Republicans in power for years — and implies the 4th Congressional District in the central Lower Peninsula was drawn to the wishes of Dave Camp, a longtime Republican congressman from Midland who has since retired.” The lawsuit claims that the emails clearly show Republicans used party membership of registered voters to influence their decision making when drawing state voting districts.

Despite the outcry over partisan gerrymandering, Prop 2 has faced its fair share of hurdles. Riley Beggin of Bridge Magazine reports that Citizens Protecting Michigan’s Constitution, a group opposed to the ballot proposal, have criticized the initiative for being “too broad and could only be enacted by constitutional convention.” Over the summer, the measure was brought before the Michigan Supreme Court to decide whether it would be placed on the November 6 ballot. Despite concerns that Republican appointed judges would strike down the measure, the Michigan Supreme Court ruled 4-3 in favor of keeping Prop 2 on the ballot, with 2 Democrat appointed judges and 2 Republican appointed judges ruling in favor.

In the majority opinion, Republican appointed Justice Viviano stated, “We are stewards of the people and must faithfully abide by the decision they make through the laws they adopt.”

In addition to Citizens Protecting Michigan’s Constitution, Republican candidate for governor, Bill Schuette, is among many Republican officials who are against the measure. While some Republican officials have been accused of pushing against Proposal 2 in order to maintain their political power, others, as reported by Bridge Magazine’s Ron French, are afraid of a Democratic power grab. “Many Republicans view the measure as a Democratic ploy to redistrict [Michigan] in their favor, or at least redistrict the state in a fashion that does not favor Republicans, such as the current map drawn by the GOP in 2011 does.” Voters Not Politicians has already pushed back against these claims, insisting that the measure would prevent any political party from gerrymandering the state in their partisan interests, and have released a TV advertisement supporting their proposal.