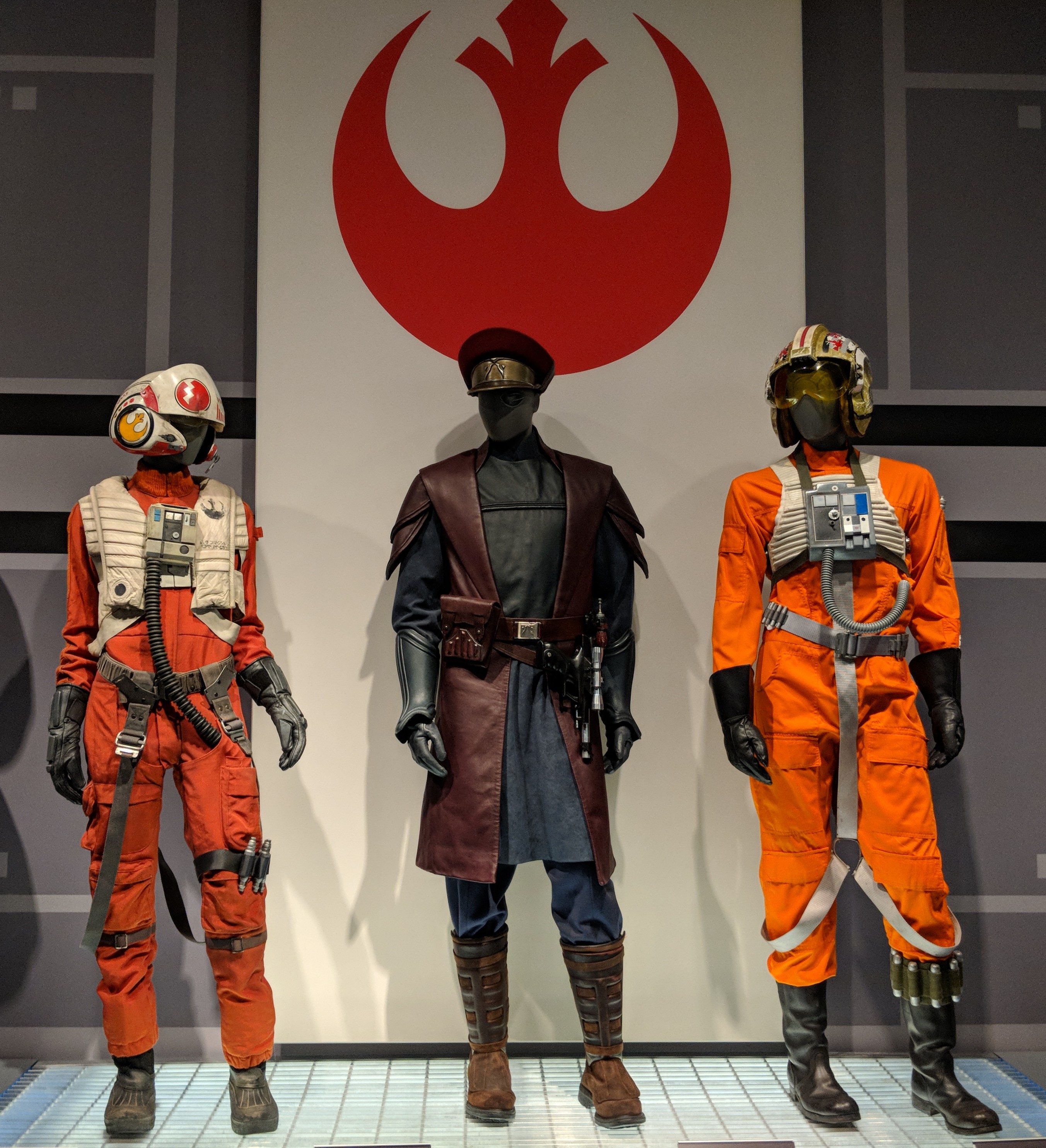 Ranging from the original trilogy to the newer films, the Detroit Institute of Art’s “Star Wars: Power of Costume” exhibit has something for fans of any movie. The exhibit, which opened in May, features original concept art and over 60 original costumes. In an interview with Michigan Radio, exhibit curator Elliot Wilhelm explained that he wanted to bring this exhibit to the DIA in order “to establish a connection with the people who may feel that this institution is not for them and point out that it is just the contrary: it’s for everyone.”

There is much to check out at the exhibit, but here is a top ten list of the definite must-sees.

The white gown shown at the exhibit first appeared at the end of Episode V: The Empire Strikes Back, released in May 1980, and is a variation of Princess Leia Organa’s normal outfit. According to John Mollo, “The clothes must be an extension of character” and Leia’s ensemble was simple and modest, but also “versatile for action.” Leia’s monochromatic, mostly-fixed outfit stands in sharp contrast with her mother, Padmé – who had plenty of outfits in the series – but helped create an iconic look for her.

An early part of the exhibit devotes an entire room to the droids of the Star Wars universe. The room showcases C-3PO, R2D2, and BB-8. There’s a ton of information here that reveals details many moviegoers may not have realized about the droids. For example, a placard under R2D2 reveals that the costume had a small car seat inside for actor Kenny Baker. The most interesting part of this section is likely the concept art for the droids – a concept sketch of C-3PO reveals that the droid was heavily inspired by the robot in Fritz Lang’s 1927 film “Metropolis.”

The “Costume Shop” section of the exhibit showcases several displays of concept art and fabric, including a wall of “Wardrobe Bibles” from the Prequel Trilogy that include fabric samples and an approved final drawing with sourced materials. Trisha Biggar, costume designer for the Prequel Trilogy, “brought on nearly 100 couture-level specialists to make countless prequel costumes.”

The exhibit has a room dedicated to the “Outlaws and Outsiders” of the Star Wars universe, including iconic bounty hunter Boba Fett and relative newcomers Rey and Finn. Here the exhibit states that George Lucas wanted the costumes to “communicate the peculiarities of characters who were good, evil, and everything in between.” These costumes feature primarily shades of browns with no visible fastenings or zippers since, evidently, Lucas felt it would “disrupt the fantasy.” This display also includes Princess Leia’s infamous “Slave” costume, which the exhibit claims “follows a Hollywood convention of presenting female characters in revealing outfits, objectified for the viewer’s gaze.” Next to the “Slave” costume, though, is her more modest “Boushh Disguise” worn in 1983’s Episode VI.

Two of the most cherished characters of the series have possibly the most eye-catching display in the entire exhibition. The exhibit explains that Harrison Ford’s Han Solo was meant to draw comparisons to “a gunslinger from a John Ford western.” The exhibit also notes that Chewbacca, played by Peter Mayhew, was inspired by George Lucas’ Alaskan Malamute dog, Indiana, and eventually evolved into “a combination of a monkey, dog, and a cat.” Additionally, a cooling suit designed for Mayhew for the Prequel Trilogy is displayed; Chewbacca’s costume was a knitted wool suit topped with 15 pounds of yak hair and could get quite hot.

Sheev Palpatine, also known as Darth Sidious, went through a major transformation throughout the films. The costumes laid out here outline the Emperor’s character development from Senator to Emperor to Sith Lord: “the costume’s colors, materials, and textures reflect the deterioration of Palpatine’s moral fiber.”

One of the most memorable movie villains of all-time, Vader has a large display dedicated to him, including a fascinating step-by-step guide on “How to Dress Darth Vader” graphic and showcases the actor’s stunt mask. The exhibit also explains that Lucas wanted Darth Vader to look like “a dark lord riding on the wind.” Concept artist Ralph McQuarrie and Costume Designer John Mollo eventually came up with a combination of “a German steel helmet, motorcycle jacket, monk’s cape, and gas mask.”

8. Imperial Army
According to the exhibit, Lucas wanted the Imperial Army to look “fascist” and “totalitarian.” Costume designer John Mollo thus dressed them in outfits similar to uniforms worn by German officers in the 1800s, and the Imperial officer’s hat “mimics field caps worn by the Alpine troops of Nazi Germany.” Showcased here are a few designs of the Imperial Army, including two Tie Fighter Pilots, an Imperial Officer, and various helmet designs.

Lucas wanted to contrast the Rebel Alliance with the Imperial Army by making them look like “something out of a western or the U.S. Marines.” The exhibit explains that Mollo, who was also a military historian, was able to use his familiarity with “military garb and badges” to create a “language of symbols and rankings.” The costume designs, then, “look futuristic, but still familiar.” The Rebel Alliance costumes showcased here include a Resistance Fighter Pilot, Captain Typho from 2005’s Episode III, and Luke Skywalker’s X-Wing Pilot Jumpsuit.

Possibly the character with the most intricate and awe-inspiring costumes, Padmé Amidala has an entire room dedicated to her various outfits and hairstyles. Padmé’s outfits range from her Geonosis Arena Costume, which is reminiscent of Princess Leia’s white gown, to her Naboo Starfighter Pilot Costume, to her wedding gown worn in 2002’s Episode II: Attack of the Clones. The exhibit claims that Padmé’s wedding gown was “made from an antique Italian lace bedspread” and was “enhanced with more than 300 yards of handmade, French-knit braid,” with pearls added to give it something “extra.”

One of the most interesting concepts in this room is Padmé’s clip-on hair pieces in Native American Hopi-style. The exhibit’s multimedia tour guide claims that Princess Leia’s famous hairstyle in the original trilogy was inspired by a traditional Native American Hopi hairstyle, known as the “Squash Blossom.” The exhibit claims that “unmarried Hopi women wore their hair like this to mark their entry into young adulthood.” The popularity of Leia’s hair in the original trilogy prompted Lucas to “(encourage) the prequel designers to continue to use hair as a way to boost the overall impact of a costume.” Thus, this hairstyle, as well as Mexican Revolution-era imagery, also inspired Senator Amidala’s buns worn in 2002.

In addition to the exhibit, the DIA will be showing several sci-fi films related to “Star Wars” at the Detroit Film Theater. The event began with “The Hidden Fortress,” directed by Akira Kurosawa and includes “Metropolis,” which inspired C-3PO’s design, and “Attack the Block,” starring John Boyega who plays Finn in the recent Star Wars films.

“Star Wars: The Power of Costume“ runs through Sept. 30.