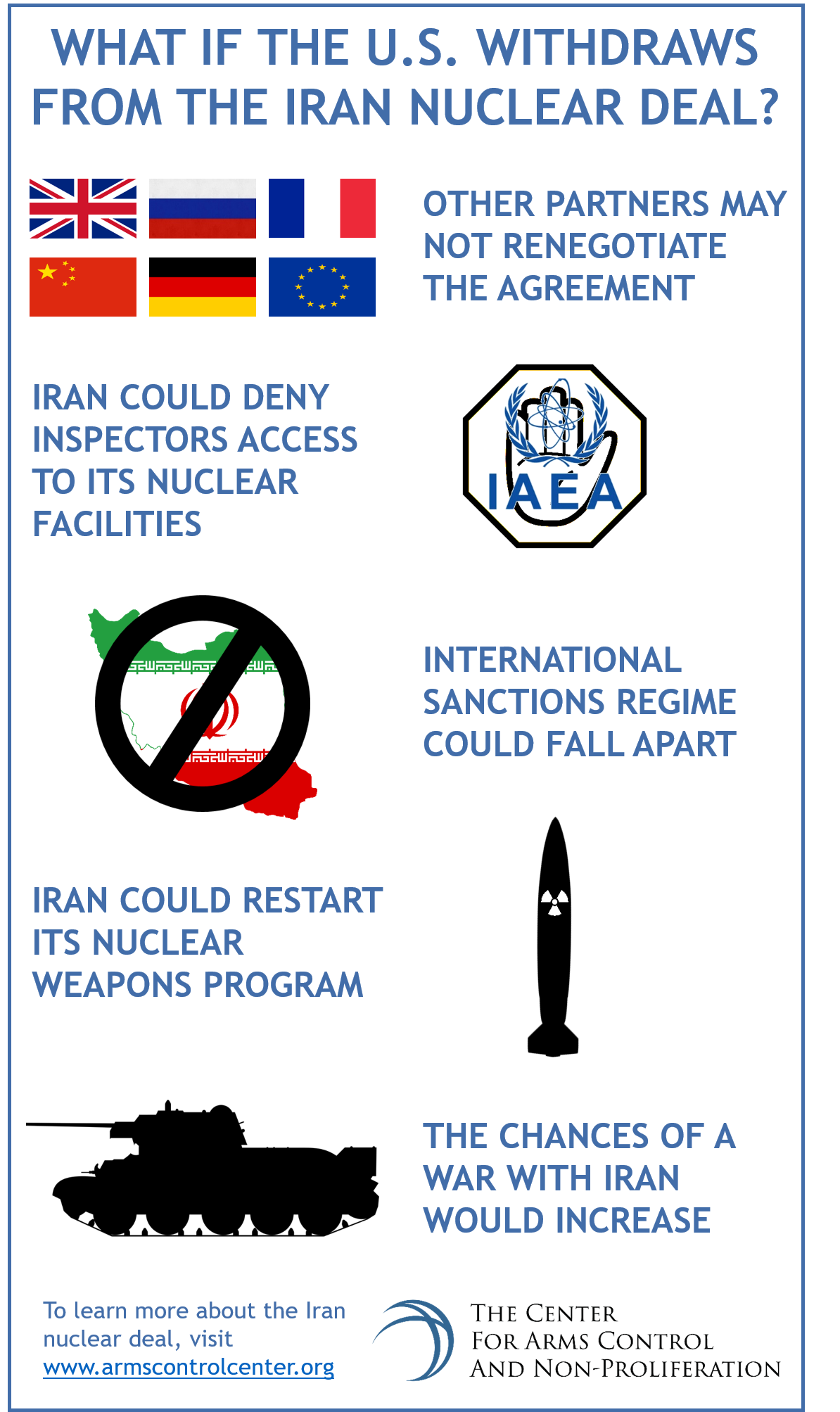 In 2015, President Obama signed the Joint Comprehensive Plan of Action, most commonly referred to as the Iran nuclear deal. Under the agreement, Iran agreed not to enrich uranium past 3.6 percent for 15 years, would stop its research and development for 10 years and would not pursue other avenues towards the advancement of its nuclear program for 25 years.

President Trump has been a strong critic of the deal. Trump has expressed concern with Iran’s ability to still enrich uranium, believing that despite the low level of enrichment regulated by the agreement, Iran would still be able to produce nuclear weapons. Trump has also taken issue with the length of the agreement, fearing that this deal only provided a temporary solution to Iran’s nuclear threat.

Trump also stated in many instances that the deal did not give the United Nations enough ability to investigate nuclear sites in Iran, believing that the deal required U.N. investigators to give Iran a prior notice before investigating any sites that may be involved in the advancement of the Iranian nuclear program, giving Iran ample time to hide evidence.

The Washington Post’s Joby Warrick wrote that the Iranian Nuclear deal gave the International Atomic Energy Agency “unprecedented” access to Iranian nuclear sites. As the agreement stated, Iran is required to allow the IAEA to have unfettered access to all locations that deal with the production or advancement of nuclear technology, without the IAEA giving any prior warning. The IAEA is only required to request access, when dealing with locations that are not involved with Iran’s nuclear program. In addition, as reported by Reuters and Haaretz, the 3.6 percent enrichment of uranium allowed by the deal is not capable of producing nuclear weapons. Nuclear bombs require uranium enrichment of around 90 percent.

Trump’s decision to withdraw from the Iranian nuclear deal came directly after Israeli Prime Minister Benjamin Netanyahu displayed a slide show presentation, televised and circulated worldwide, of alleged evidence gathered by Israel’s intelligence agencies, that suggested that Iran had continued its efforts to develop nuclear weapons in secret and in violation of the Iran nuclear deal. Despite the “evidence” provided by Netanyahu, as CNN’s James Masters reported, the IAEA has found no evidence to support Israel’s conclusion that Iran has continued to advance its nuclear program outside of stipulations outlined in the agreement. In addition, all information provided by Netanyahu about Iran’s nuclear history had already been known to U.S. intelligence agencies prior to the formation of the deal. As Vox’s Zack Beauchamp reported, the presentation was designed to “intimidate Iran: to show that Israeli intelligence could infiltrate Iran’s most sensitive facilities. But mostly, it was a speech targeted at President Trump. There were lots of photos and visual aids, simple messages typed out in big block letters — the kinds of things Trump reportedly likes to see when receiving information.”

Following the United States departure from the deal, Iranian leadership have warned western powers that their country will reignite their uranium enrichment efforts at a faster rate than before. With the deal virtually dead, Iran has nothing preventing it from continuing its efforts towards nuclear capability. While Trump is correct in stating that the deal did not provide a long-term solution to Iran’s nuclear program, it did prevent them from advancing their nuclear technology in the present. Instead of being given time to deal with the threat Iran poses, and potentially continue negotiations, Trump has forced the U.S. and the rest of the international community to directly confront Tehran immediately. With the U.S. pulling out of the Iran nuclear deal, Iran appears to be pursuing closer relations with China. As Ted Regencia of Al Jazeera reported, Iranian president Hassan Rouhani met with Chinese president XI Jinping in Qingdao to discuss “bilateral relations, and the future of the nuclear deal.”

Despite Trump’s opposition to the agreement, U.S. intelligence agencies and American allies ‒ including the UK, France and Germany ‒ believe the agreement was the best safeguard against Iran’s nuclear program. Despite Tehran’s adamant stance against negotiating over their weapons program past 2025, Trump believes he can negotiate a better deal.

The decision by the president has called many in the international community to question the integrity of any negotiations made by the United States in the future. As reported by the Associated Press’ Catherine Lucey and Josh Lederman, the president “deepened his isolation on the world stage and revived doubts about American credibility.” By pulling out of an agreed upon deal, Trump may be sending a message to the international community that America will only honor its agreements for as long as the current president is still in office. As NPR’s Scott Neuman reports, the Iranian foreign Minister, Mohammad Javad Zarif, stated, “I think the United States doesn’t want to send the message to the world that if you negotiate with the United States, the U.S. is going to come back after you had reached an agreement and tell you ‘I don’t like these parts of the agreement and I want them re-negotiated.’”