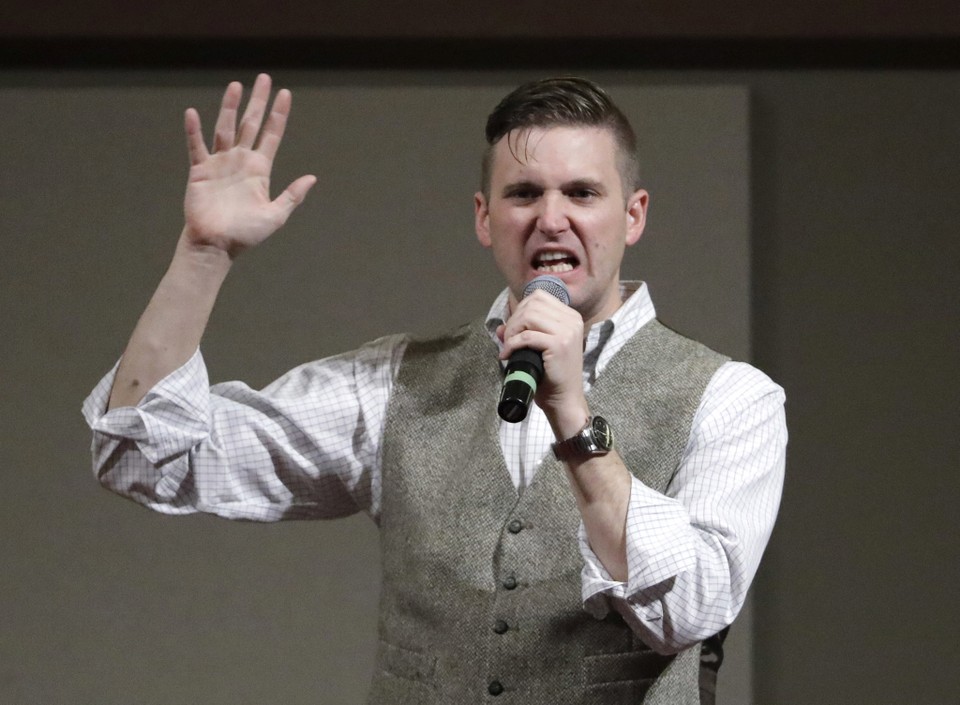 The announcement, made in the wake of violent clashes between Spencer’s supporters and protesters at Michigan State University where he was scheduled to speak, marked the end of a year-long concerted effort to promote the propagation of white separatist ideologies on college campuses across the nation, and within the communities they serve. Spencer, a vocal Trump supporter in the runup to the 2016 presidential election, rose to prominence when videos of some Trump supporters giving Spencer Nazi-style salutes at an event in Washington celebrating Trump’s win emerged and went viral.

Calls from the public for colleges and universities to deny his requests to speak to prevent the elevation of his ideologies, and the repeated legal battles that followed as colleges and universities sought to deny him access to their venues to avoid the violence that seemed to follow him wherever he spoke, underscore the complexities of the protection of freedom of speech in a safe and inclusive environment and highlight a shift in perceptions and attitudes towards restrictions on free-speech.

Historically, college campuses have always been at the center of the debate on free-speech. The Free Speech Movement, a student-led college campus phenomenon that changed the face of activism, can be traced to UC Berkeley in 1964. Inspired by the Civil Rights struggle and later fueled by opposition to the Vietnam War, the UC Berkeley free-speech activists of the 1960’s were protesting a ban on political activity on campus. Reflecting the times, student-led protests on college campuses today have taken a different turn.

While the First Amendment is held in high regard, the principle of free-speech is politicized. Individuals and groups find themselves on opposing ends of a polarized spectrum.

On one hand, liberal and minority students fight for the exclusion from campuses of hate-speech, speech that demeans or discriminates based on attributes such as race, ethnicity, nationality, sexual orientation, gender identity, disability, and other similar grounds. On the other hand, those that hold unpopular or offensive and hateful views fight to protect their right to freely express those views.

First Amendment protection gives leeway to hate-speech, but there are some narrow exceptions to free speech guarantees that warrant legal prosecution. For instance, while an individual’s right to express that they dislike persons of a specific race is protected by the First Amendment, making immediate threats, and inciting criminal acts against an individual or groups regardless of their race is a criminal offense. The utterance of face-to-face comments that may incite imminent lawlessness is also a criminal offense.

As limited public forums, public colleges can put in place speech codes that limit speech within the legal limitations in accordance with state and federal statute, and local ordinances. While the potential of violence is considered when deciding to grant or deny access to venues to controversial speakers, speakers like Spencer have challenged being denied access and argued that it is the responsibility of the host college to foot the bill for safety concerns. Viewpoint-based restrictions are outright challenged as unconstitutional.

How then should colleges find a balance between adherence to First Amendment obligations and fostering the protection of a diverse and inclusive environment? As an integral part of the diverse community it serves, Henry Ford College welcomes all forms of human diversity. Fostering a welcoming and inclusive environment, the college prohibits all forms of discrimination in accordance with state and federal statute, and local ordinances.

In an online survey conducted by The Mirror News, 76 percent of respondents feel that their civil liberties, such as freedom of expression, are respected at HFC. James Rigby, an HFC student, a person of color, and a member of the LGBTQIA community says: “There is freedom of speech at HFC, but some of our voices are not really heard. In a set community, there will always be a majority with a more prominent voice, and HFC is no different."

Harvell explains that when individuals from diverse backgrounds are placed together in one environment, there is bound to be something that one individual does that goes against the belief systems of another individual. “A part of not being able to be completely inclusive is the history of this country and the unequal power relations that maintain the guidelines of what is included and what is excluded. The dialectics between what is included and what is excluded stem out of differences in religious beliefs, ethical principles or personal philosophies,” he adds.

In a free society, all views, reprehensible, hurtful, or otherwise, must be allowed to be expressed freely. While the First Amendment is used to guarantee the free expression of these views, just because one has the right to express them does not mean that they should express them. Our inner sense of what is right or wrong should act as a filter on what we do express.

Unless the First Amendment is amended to include a hate-speech exception to the protection of free speech, those with reprehensible and unpopular views have the right to freely express themselves, and those against those views have the right and moral obligation to protest.