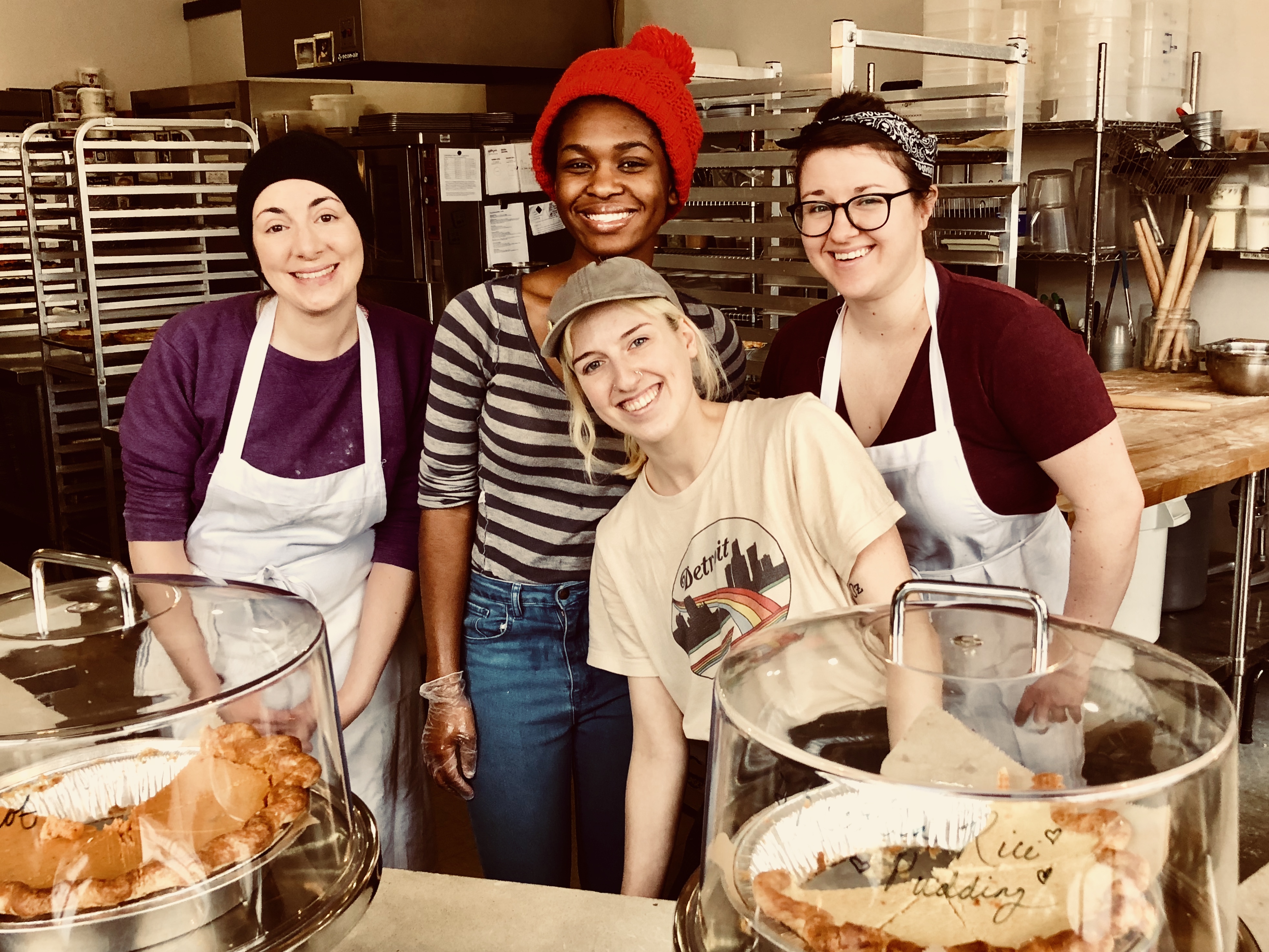 In West Village, on Detroit’s east side, a little bakery has been causing quite a big stir. Sister Pie celebrates three years this month at its corner storefront on Kercheval Avenue. The business began in 2012 when owner Lisa Ludwinski took to selling baked goods from her parents’ kitchen. Saluted by Bon Appetit magazine as “astonishingly good” and the maker of “impressive pastries,” Sister Pie is rapidly rising from humble beginnings. If you’ve not stopped in at this neighborhood sweet spot for a cup of coffee and an egg-on-top galette, or flaked your fork through a slice of its signature salted maple pie, then you may be missing some of the best homemade goodies the city has to offer.

Besides all things pastry related, what Sister Pie offers its guests is a sense of genuine welcome and community. In the intimately eclectic space, patrons are personally greeted and invited to do pretty much as you might in your own home – select a mug from the “piebrary” hutch, and grab a seat at the communal table or a window bench to enjoy the daily offerings. Maybe today it’s a roasted carrot, navy bean and spinach hand pie or a golden slice of honey lemon merengue. If it’s the weekend, and you’re early enough to beat the crowd, you may be lucky enough to get your paws on a sticky bun. Flavors include lemon poppyseed, peanut butter banana, or straight up cinnamon. As the steady ring of the bell over the door suggests, menu items can be quickly taken on the go or leisurely enjoyed inside, where the aromas are thick, as the sisterhood of traveling pies prepare delicacies just beyond the counter.

Owner and head baker, Lisa Ludwinski says much of what her bakery does is about the people behind the counter. She’s excited about strengthening the experience for employees and “figuring out different ways we can make this a cool place to work.” Ludwinski believes that little by little, with each employee, Sister Pie is fine-tuning that aspect. Though the staff is not exclusive to women, the bakery currently employs over a dozen women and there’s a real bond there, from bakers, to dishwashers, to front of the house. Ludwinski leads the recipe testing and perfecting, yet the collaboration of ideas that come from the group lead to new flavor combinations, dietary explorations, and a general sense of camaraderie in the workplace.

“One awesome thing that we’re doing is making a lot more vegan things,” say employee Bri Meilbeck, “which I’m really excited about because I’m the vegan that’s here that’s pushing for it.” She explains the value she believes her voice has, in that Sister Pie is proud to be a triple-bottom-line business, maintaining a strong commitment to its employees, the economy and the environment. The bakery is expanding its specialized dietary options, which customers have also requested, to include a selection of vegan pies as well as gluten-free cookies and brownies. “One way that we are reducing our environmental impact is that we started composting this year,” adds Meilbeck. “Now we compost all that we have and barely throw away any food trash.”

Ludwinski says all the baking at Sister Pie is focused on highlighting seasonal produce and supporting local Michigan farmers, often Detroit farmers, as much as possible. She changes the shop’s menu every four to six weeks to reflect the highest quality ingredients readily available nearby. Ludwinski says that in the spirit of creativity and experimentation, the homemade soup flavors changes daily and is generally never repeated. As to her favorite menu item, that would be the Cranberry Crumble, a simple yet mouth watering dessert combination of tart Michigan cranberries and golden rolled oats toasted in butter and available during the holiday months of November and December.

Ludwinski, a semi-finalist baker for the 2018 James Beard Award, a prestigious recognition in culinary arts, surprisingly had not imagined a career in baking. She studied theater in college and went from Michigan to New York to pursue a career in theater directing, but she was distracted by the food scene and the new wave of food culture that was surfacing in New York at the time. She began filming a low-budget cooking show out of her apartment called “Funny Side Up,” and tells Sean Kenniff of StarChefs Magazine that even though she didn’t know what she was doing once a week for two years, she just wanted to immerse herself in the world of food.

Grit and determination propelled Ludwinski from a behind the counter position at New York’s East Village Milk Bar to an internship in the kitchen, which she tells Kenniff was “a great way to develop creative impulses and cook and bake confidently.” Ludwinski explains, “A lot of my pastry cooks will laugh about how lackadaisical I can be, but it produces great results. I’m pretty lighthearted about cooking, but we have strict rules in terms of our product. I’m open to experimentation, and know that while sometimes I will not make the best thing ever made, the quality of the experience for the customer and employee is ultra good.”

When Ludwinski returned to Michigan itching to start her own business, it was from her parents’ kitchen in Milford that the large scale baking began. Ludwinski says the name Sister Pie originated with a term of endearment she and her sister called one another in lieu of “sweetie pie.” She says it just fit with her ideas of community and sisterhood that she wanted her business to reflect. In 2014, Sister Pie won the Comerica Hatch Detroit Contest, providing seed money to move into the brick and mortar location in West Village. The bakery hosted a 24-hour dance marathon fundraiser to help raise the rest of the funding needed to open shop.

Offering high quality ingredients, while paying staff a fair and living wage, isn’t a cheap way to do business. Yet Sister Pie is committed to these standards and makes them work. In the spirit of encouraging a community that cares for one another, the “pie it forward” program allows guests who are feeling generous to fill out a slip and clip it on the clothesline strung across the wall for future guests to find. The hope is that no one walks away hungry. Those who may not have the funds can simply cash in a pre-bought slice. The bakery also offers discounts and tries to maintain transparency over its choice in pricing. Recently, after realizing it needed to raise the cost of a few of its pastry items to maintain its commitment to “working with the best local-when-possible ingredients we can get our hands on,” it increased its senior and neighborhood discounts from 10 to 15 percent.

Ludwinski says she greatly appreciates the tightly knit residential neighborhood surrounding Sister Pie that is faithful to supporting its community, yet willing to share its preferences to help sharpen local business. Though she feels committed to this spot and those who made it happen, it’s unclear whether it will remain home to the bakery long-term. Sister Pie hopes to expand its space in order to increase wholesale capacity and make room for pie baking classes, which sell out quickly. Ludwinski doesn’t want to replicate her business somewhere else and is not very optimistic that she will be able to obtain the needed space where she is at. This may mean a change of address for Sister Pie, and Ludwinski is hoping that won’t mean moving far from loyal customers.

Any way you slice it, this little pie shop is built on much more than sugar and flour. Even if it has to relocate in order to expand, Sister Pie will strive to maintain its strong relationships formed behind and in front of the counter, and in the community.

As a gift to all of us pastry loving fans, Ludwinski will be sharing 75 best loved pie recipes and bakeshop favorites in her upcoming cookbook, “Sister Pie: The Recipes and Stories of a Big-Hearted Bakery in Detroit,” set to hit shelves this October. In the meantime, Sister Pie products can be found at the corner shop in West Village, as well locally-sourced favorites around the city such as Germack Coffee Roasting Co., The Farmer’s Hand, Folk Detroit, MOCAD’s Cafe 78, and SocraTea.