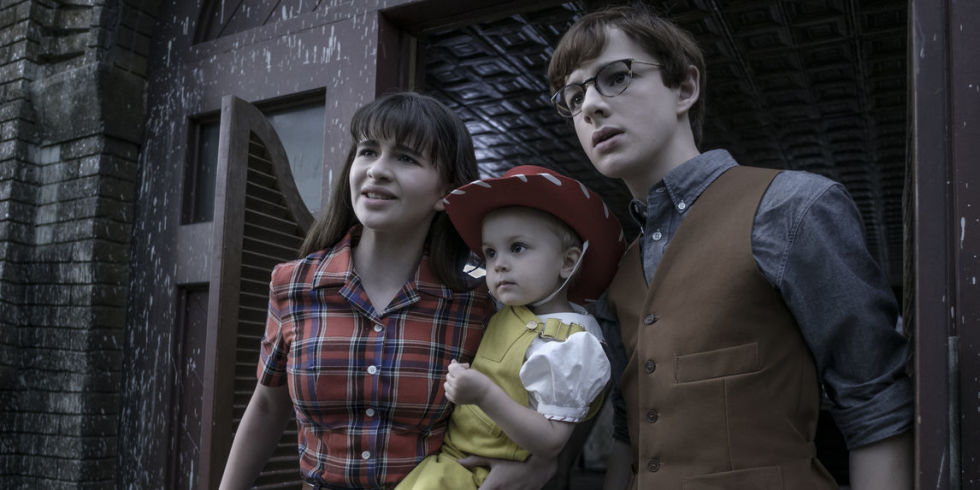 “A Series of Unfortunate Events” season two continues to detail the horrible lives of the three Baudelaire children, and gives viewers a look into the shroud of darkness that is a childhood without proper care. The lives of Violet, Klaus, and Sunny do not become any better as the series progresses, and the vile Count Olaf is always right behind them.

Continuing where season one left off, developers Mark Hudis and Barry Sonnenfeld dive deeper into the missing details of Lemony Snicket’s novels. The series begins with the fifth book, “The Austere Academy,” where the children are left at Prufrock Preparatory School when Mr. Poe, the banker in charge of the Baudelaire fortune, cannot find another suitable guardian for them. While in the school, Violet (Malina Weissman), Klaus (Louis Hynes), and Sunny (Presley Smith and voiced by Tara Strong) meet Duncan (Dylan Kingwell) and Isadora Quagmire (Avi Lake) who are from a set of triplets who lost their brother and parents in a tragic fire similar to that of the Baudelaires. When Klaus and Isadora both pull out their pieces of a spyglass, they realize they are part of the same mystery.

After outsmarting Count Olaf (Neil Patrick Harris) and leaving Prufrock Prep, the Baudelaires are taken to live with Esme (Lucy Punch) and Jerome Squalor (Tony Hale). Within the first few minutes of arriving, they are met with utter dismay when they discover that not only are the Quagmires trapped somewhere, but that their new guardian is in cahoots with the evil count and his disgusting theatre troupe.

The idea of a secret organization was introduced in season one, but is the crux of season two. Everywhere the children turn the letters V.F.D. are present, whether in spoken words or as in the name of a strange town. Not only were the Baudelaire and the Quagmire’s parents involved in the secret organization, but as the series progresses the children discover many more colorful folk that either were or are still part of it. Now it appears the children are a part of it too.

Each episode presents its own view of how the world works. In the first two episodes, viewers are greeted with the idea of school and how its glamorous outward appearance is nothing like it is on the inside. Two of the characters first introduced are the obnoxious Carmelita Spats (Kitana Turnbull) and Vice Principal Nero (Roger Bart). Carmelita is a spoiled brat who thinks the world revolves around her and manipulates everyone (except the Baudelaires and the Quagmires) with how “adorable” she is. Meanwhile, Nero is so focused on his musical career that he does not realize Count Olaf has slipped right past him. Not only does Carmelita bully the orphans, but she is able to convince everyone, including teachers, to do so as well. Nero allows this to happen despite being the one who should be putting a stop to it. While this may be a gross over exaggeration of what school is like, it relentlessly places the issue of bullying in the forefront.

In the books, readers get a small glimpse of what fun the Baudelaires could have had with Jerome and Esme. In the show, however, trouble is introduced right away. In these episodes, V.F.D. is explained more explicitly with the introduction of Jacques Snicket (Nathan Fillion), Lemony Snicket’s more daring brother, and the many ways he and the organization tried to get in contact with the children. The idea that children are rarely listened to is a theme from the novel that is dramatized in this episode when the children continuously attempt to tell their new guardians that Count Olaf is right in front of them. Despite their efforts, the children are not heard. They are turned away even when dealing with important topics such as their well-being and safety.

Despite being offered a happy life with Jerome, the children rush off to save the Quagmires in a village where there are too many rules and children are a certified nuisance. Once again, Count Olaf struts into their lives, but this time he is almost stopped by Jacques Snicket and his partner Olivia Caliban (Sara Rue). The phrase heard throughout the episode is “It takes a village…” when arguably this village was not ready to take care of children. With an entire village of adults, the Baudelaires are only able to convince one of them about Olaf being there in disguise.

As the series progresses into books eight and nine, it becomes darker and the action is more in your face. The Baudelaires, despite all of their efforts, begin to turn a little cynical when they are pushed to the limit. This alone mirrors what can happen to children when they are not left in the proper care of a suitable adult. Though they desperately try to hold onto themselves they become mischievous and angry, diverting away from the people they once were. They still maintain their child like wonder but have been forced to grow up too fast in a world where even the brightest adults are used and abused by the wicked.

In seasons one and two, sets and lighting are what give the show it’s out of place feel. Nothing in the show looks like it would be from anywhere in the real world, such as the Village of Fowl Devotees or Heimlich Hospital. The production designer, Bo Welch, is a long time Tim Burton collaborator with his most notable production design credits being Beetlejuice and Edward Scissorhands. His work with those types of films is demonstrated within “A Series of Unfortunate Events” in the wacky and creepy looks of buildings and their interiors. The set design does not make a viewer feel comfortable while watching, and the lighting adds to the uneasy feeling that settles in the stomach. Much of the series is shot in what appears to be natural light but with an almost grey overtone making it gloomy and giving each character a chalky look. When there are brighter colors, they are offset by grey and brown hues. Once again Neil Patrick Harris steals the spotlight with his beautiful interpretation of the despicable count. Harris is the executive producer, so he may have more of an opportunity than others to add jokes and personality that are not in the original novels. The novel version of the count is much more dark and sinister, but Harris takes the character and turns him into someone viewers do not necessarily root for, but for some reason find him oddly charming.

More secondary characters are introduced in season two, and Olaf’s troupe plays a larger role and sometimes outshines the count with their witty one-liners. The secondary characters are just as important as the Baudelaires and Count Olaf. Many new characters appear in the show that are not in the books. As for Olaf’s troupe, there is relatively little in the books describing their personalities. Because of this, the actors had to create personas for each of their characters. Some of the acting is a little over the top and more theatrical, but it works well with how the show is structured. While the plot focuses on the lives of the children and what the books have already told readers, the secondary characters fill in most of the gaps that were left by Snicket’s elusive writing.

“A Series of Unfortunate Events” allows viewers to escape into a world they might not want to enter, but are too enthralled to leave. The show is designed to be unsettling, and draws from dark fairy tale traditions where adults are not to be trusted and characters regularly meet a violent end. With only four more books and one more season, the twisted children’s show leaves viewers excitedly anticipating what will surely be an exaltingly frightful denouement.