Going Zen In The D 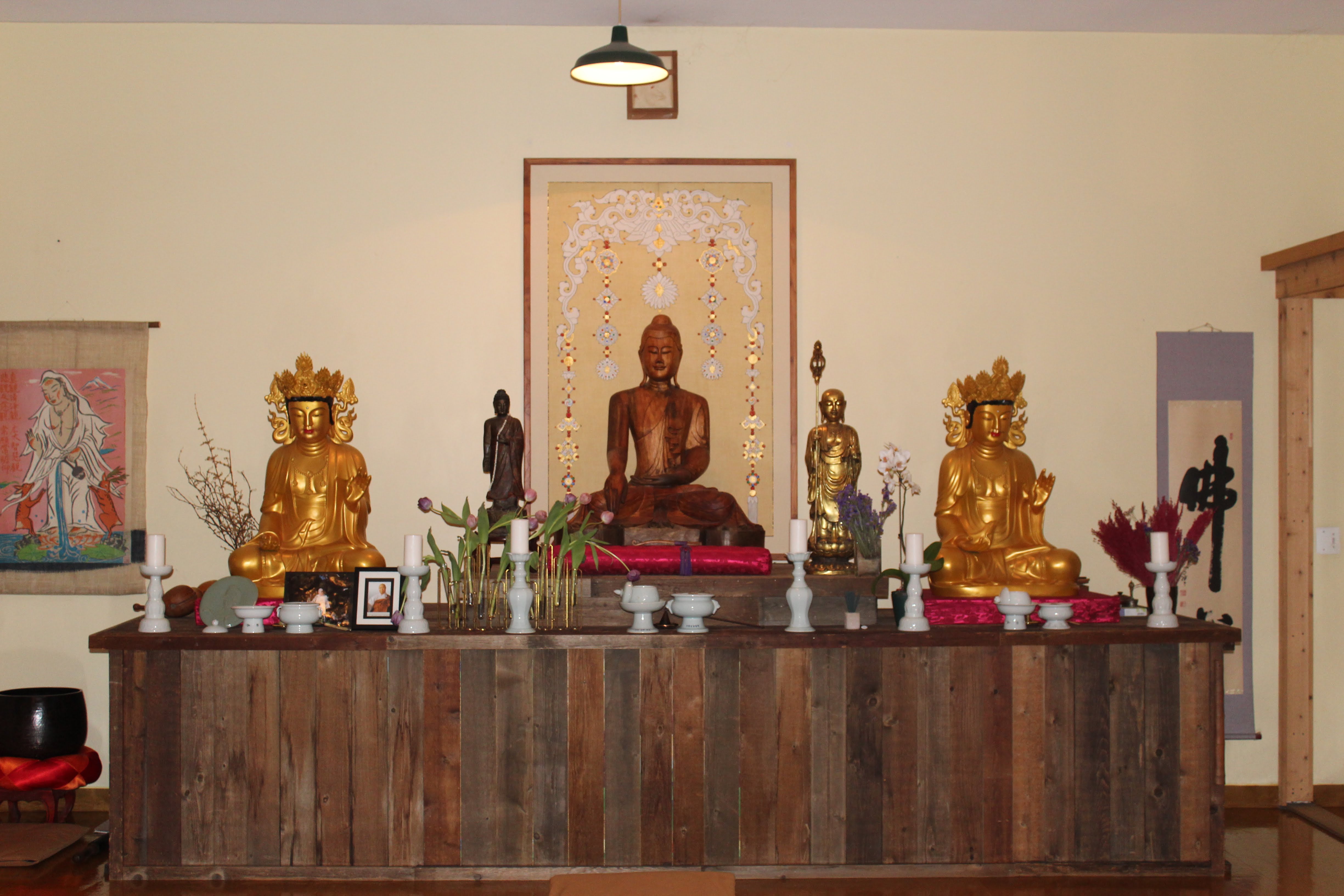 In the 2.5 square mile city of Hamtramck is a large golden Buddha statue resting on the roof of a renovated house turned Zen Center. The home has been converted into a branch of Sudeok-sa Temple, Korea, where monastics train. What goes on inside the walls of a Zen center? I attended a meditation service and worked with the Abbot, head monk, and some of the center’s students to seek answers to that question..

The Detroit Zen Center is one of a few Buddhist temples in the Detroit area. Renovated from a Hamtramck home that was originally constructed in 1926, the property has an array of features including a Meditation Hall, an attached 3-level residency, a public Peace Garden, and Living Zen Organics which is a café and bulk food store that is operated by the monks and students, who make home-made foods that are available to the public for a donation. All are welcome to explore the center and enroll in the study of Zen or visit.

The founder and Abbot of the center is Detroit native, Hwalson Sunim, who is a charismatic and approachable man with a quirky sense of humor. Hwalson was born in Detroit in 1941 and later was a professor of sociology at Penn State University. He moved to Toronto to be a sport sociologist in amateur sports for the government of Ontario. Hwalson left the West behind to study Zen Buddhism for over 45 years in Korea and Japan. In Korea he studied to become a monk with several prominent masters including Dharma teacher, Wondom Sunim of Sudeok-sa, who was a refugee from the Korean War.

In 1990 Hwalson came back to Detroit with a backpack and $50 to his name. He refused an offer to start a center in California so that he could begin his grass-roots renovation of a historic and abandoned property into a Zen Center and community.

The Abbot is not alone in the venture to bring a Zen community into Hamtramck. Myungju Sunim is the centers Head Monk. The unimposing stature of Myungju is a contradiction to the quiet authority she presents when walking among the students. Myungju trained extensively in monasteries around North America and Korea. Her 20 years of experience cooking at various temples has led her to be the masterful chef behind the food in the café. Myungju is the founder of Living Zen Organics.

The café and store present a daily menu. The menu features grab-n-go nutrient dense vegan meals. There is a variety of bulk foods and teas uniformly on display along the walls. The store also features holistic health items like aromatherapy oils, lotions, soaps, cleaning supplies, and more.

The Shine One Corner of the Detroit Zen Center is a volunteer program that enriches the center and the café. A person can work together with monks, students, and other volunteers in projects that involve the organic food business, the on-site low-cost health food store, carpentry, gardening, maintenance, and more. These projects take place from 8:00 a.m. – 4:00 p.m., Monday through Saturday, and volunteers will receive a complimentary lunch.

Across the street from the Zen Center is the Peace Garden. The Peace Garden is a community garden that is fashioned after a traditional Japanese rock garden. Children and adults from the neighborhood enjoy gathering in the garden and all are welcome. There are some neatly pruned shrubs and small trees and particularly placed rocks that make a small geometric beauty.

As the group prepared for the morning meditation practice I roamed the few halls of the center. The calming and quiet energy radiates throughout the entire building as if the energy of the center itself is inviting practitioners inside its warm walls. As I entered the center on the brisk and rainy April Sunday morning I was met with Myungju Sunim. Myungju instructed me in a crash course of Zen Center provisos. The first step was to remove my shoes and socks and place them neatly on the shoe rack with the toes pointed out. “We start by paying attention,” said Myungju, “Or rather giving attention.” She explains that when entering the Zen Center, the shoe process is the first indicator to establish a more mindful and purposeful visit. Myungju informed me of the other small and easy to remember customs of the Detroit Zen Center like bowing briefly when entering the meditation hall. I watch the practitioners, students, and monks scuttle about doing mundane task and chores like refilling incense, dusting, rearranging furniture, sweeping, and mopping. Part of the Zen Center community is practicing service through work.

“That is the root of what we do,” Myungju said, “Meditate and work.” The simple lifestyle of doing chores and meditating is what holds this small Zen community together. The group begins the process of meditation with the beating of a drum which seems to reverberate the bodies energy each time it is struck and followed by a singing bowl, some rhythmic chanting, and some repetitive bowing. Myungju explained that these things are less about worshipping and more about mindfulness There are no words outside of the chanting just uniform movements to start the 20-minute meditation. Hwalson leads the meditation and instructs us to not only focus on our breathing but the ticking of the old-style clock on the wall and if we lose ourselves in thought to simply refocus on the ticking, and our breathing.

After the meditation Hwalson conducts a brief Dharma talk mentioning an array of Buddhistic analogies and lessons. One lesson that stood out is that Buddhism is a vessel. On one side of a river we are asleep at the wheel and the other side of the river is our awakening. Buddhism is the boat we use to cross that river. Once we are on the other side, we leave the boat, or Buddhism behind.

“Buddhism is not Buddhism,” said Hwalson during his Dharma talk in the unmistakable enigmatic advice that is common among the philosophy.

After the meditation and discussion everyone was invited downstairs to the café to share in community and tea. Sitting in the circle is where you begin to see the personality of the community. The Abbot and head monk sit cross legged on a heated slab in the center of the café and engage the practitioners in conversation and Hwalson shares some stories. Resting upon a stack of cushions, more at home than anyone in the circle, is Mumford, conked out. Mumford is a cat that Hwalson found in the alley behind the center and has been a resident of the Detroit Zen Center for three years. Mumford warmly accepts adoration from strangers and seems to be as rich in Buddhist philosophy himself as he diligently rids the campus of mice and rats at night and snoozes during the day, doing his own form of service to the Center.

Among the residents is Sojong Silas Bruner, a novice monk, who is in his third year of training at the Zen Center. He works in the Living Zen café and store. Sojong hails from Bloomington, Indiana, and he was raised in a Quaker family. He explained that Quakers are not terribly different from Buddhists but can be a little more politically active. Sojong begin studying Buddhism as a teenager and is now 24 years old. What brought a young man from Indiana to a Zen Center in Detroit?

“I wanted… to not live in a community without happiness. Buddhism isn’t about getting anything from it as much as it is about helping others. By helping others, we can help ourselves.”

Sojong tells me that life at the Zen Center is not all work and meditation. The community takes in ski trips and movies. The difference with the center is they choose to do everything as a community.

Sojong explained there are different programs to begin studying Zen Buddhism and the most important for newbies would be First Sunday. First Sunday is an introduction to the Detroit Zen Center, the meditation practice, and a Dharma talk that is designed for first time students or anyone that is interested in experiencing some culture. There certainly is no shortage of culture at the center since it is fashioned very much in the spirit of its parent center in Korea.

After that a student can practice at the center with a better understanding. Then there is an introductory course into Zen Buddhism that spans over four weeks and if a practitioner really wanted to up their meditation game or Zen practice there are the retreats. The 5-day silent retreat is where a student will meditate for 6-10 hours daily and be of service around the center.

If you have interest in Zen Buddhism, advancing your culture, or just want some delicious vegan foods or holistic health care products you can visit the Detroit Zen Center at 3030 Casmere Street. You can call in reservations to the Living Zen Café at 313-366-7738 or email questions to dzc.staff@gmail.com.