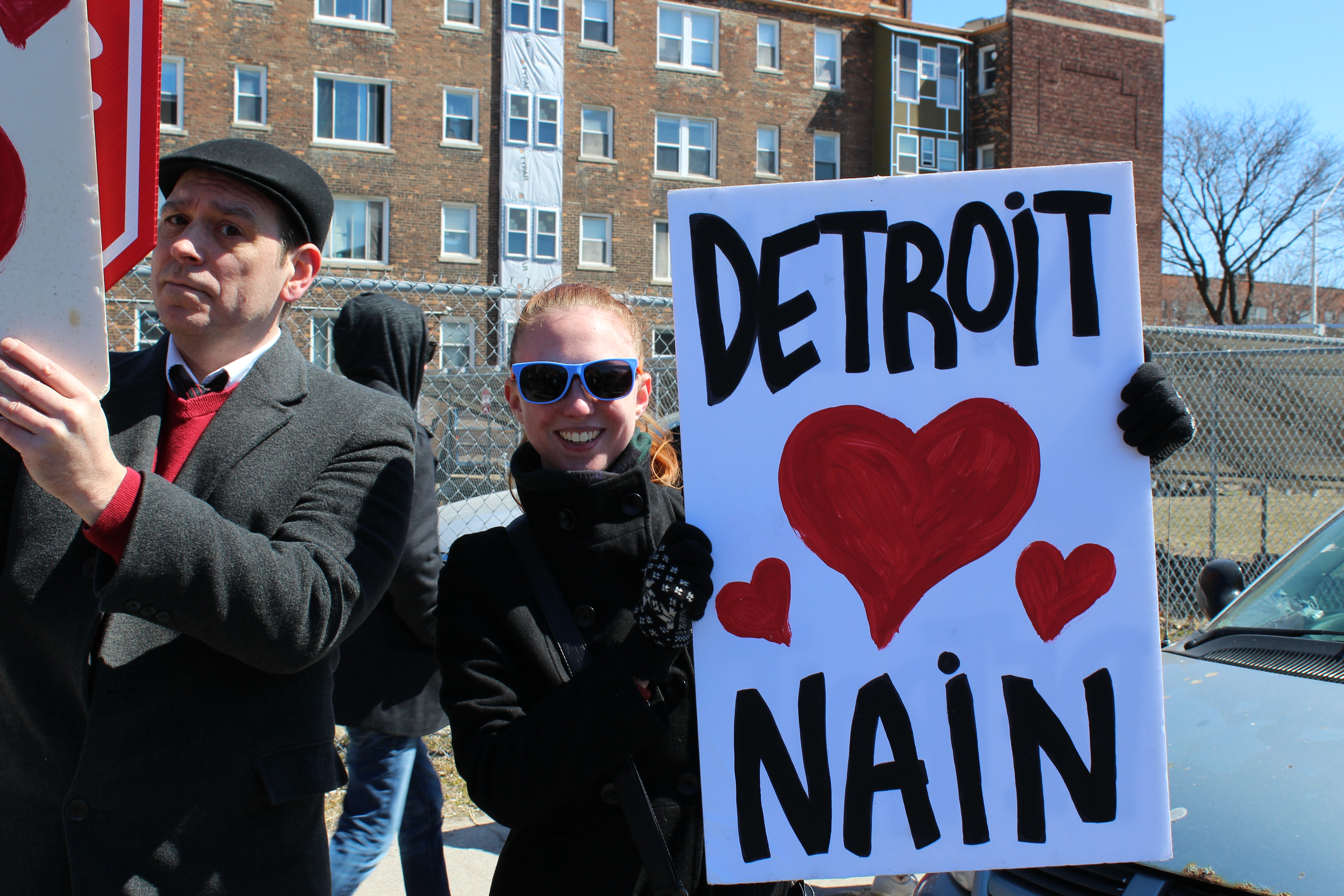 On March 25 in Detroit at Second and Canfield, the Nain Rouge – “red dwarf” – taunted the crowd by proclaiming, “I’m on a continuous loop of despair. Bad news is good news is fake news.” The 9th annual Marche du Nain Rouge started near the Traffic Jam & Snug and ended with an after-party at the Masonic Temple. From start to finish, the crowd was engaged and lively. The attire was festive, with costumes and many wearing Venetian masks.

The Marche began in 2010 when co-founder Francis Grunow felt that Detroit needed to take itself a little less seriously: “We wanted to use what they do in New Orleans as a way to inspire people to have fun and be creative and take ourselves less seriously. It’s just an opportunity to celebrate spring, be lighthearted.”

He describes the parade as “a sort of Detroit’s own Mardi Gras meets Halloween with a little sprinkle of Burning Man.” Grunow explains that connecting the Marche to New Orleans is important since both cities have French history. “We are actually older than New Orleans, but they’ve created this whole culture of parading and that’s a big part of how they do what they do,” said Grunow, who went on to say, “So, my co-founder and I were like, ‘what would it look like if Detroit had always had its own Mardi Gras?’ So that was kind of why we tapped into this history and the legend of the Nain Rouge, which is supposedly Detroit’s oldest legend.”

The Nain is thought to have first appeared in 1701 in front of French explorer Antoine de la Mothe Cadillac, according to Lee DeVito of The Detroit Metro Times. While on a walk with his wife, Cadillac encountered the Nain and struck him with his cane, ignoring a prior warning from a sorceress to appease the Nain. DeVito also points out claims that the Nain has been the cause of many of Detroit’s misfortunes, including the fire in 1805 which destroyed much of the city and the 1967 riots.

Not everyone believes the Nain is a harbinger of doom, however. Many joined the parade holding signs that read, “Stop Nain Shame” and “Be Nice to Nain.” One protester, John Tenney, explains that the Nain actually tries to warn people when something bad is going to happen. The Nain, he says, is derived from an old folklore story from the Algonquins, who lived in Detroit 300 years ago: “They worshipped a little red rabbit named Nanabozho. When the French Catholics and English came here, since it wasn’t a Catholic spirit that they were worshipping, it became a devil. That’s what we’re reading now: the European history behind it without understanding that it has a deeper, older history that’s actually more beneficial to the city. This parade is kind of chasing out the spirit that’s been protecting Detroit for 300 years.”

The Marche places a heavy emphasis on the parade goers. “You are the parade as opposed to watching the parade. It’s much better if you embrace it as a thing to be in,” Grunow says. In addition, anyone can sign up to be a “krewe,” which is an organized group that joins the parade. A krewe can simply be a group of coordinated costumes, or entire human-powered floats. Kathleen Krasity of the group Daffodils4Detroit, sponsored by the Women’s National Farm & Garden Association, says they joined the Marche to get the word out about the organization: “We want people to know that they can help plant them. They can make contributions if they want.” The group aims to plant one daffodil on Belle Isle for every resident in Detroit – about 700,000.

At the end of the parade, the Nain appeared on the steps of the Masonic Temple. “Detroit has been hacked,” the Nain loudly claims. The crowd is then asked by the parade organizers to banish the Nain by pulling out their phones and posting videos or photos of the Nain with the hashtag “#nainrouge” while booing him off stage. After the Nain was banished, the parade goers were invited to an after-party at the Masonic Temple with DJs, dancing and drinks. Until next March, when the Nain is surely to return for yet another afternoon of revelry.