Getting to the Heart of “Annihilation” 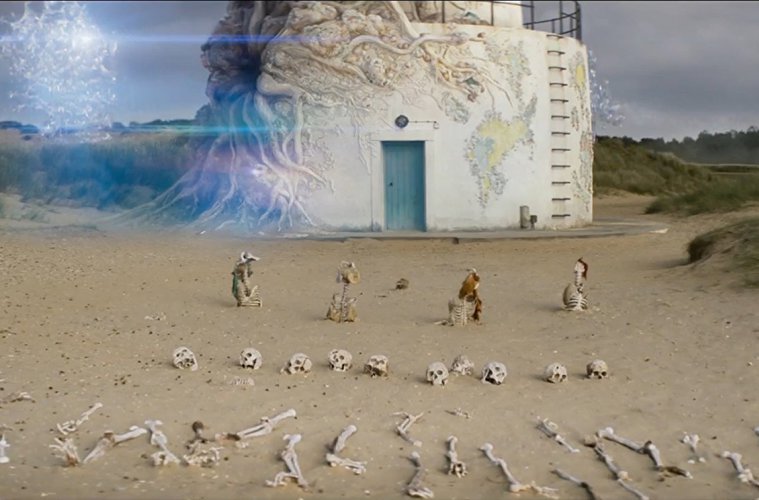 “Annihilation,” based on the 2014 novel by Jeff VanderMeer, directed and written for the screen by Alex Garland, and starring Natalie Portman as cellular biologist and former soldier, Lena, seeks to make the abstract cinematic. The novel introduces the idea of “the shimmer” or “Area X,” which is a transitional environment or ecosystem combining alien and terrestrial life. Garland explores this concept through Lena’s own recollections of her time in the shimmer.

The novel consists of the journal of “the biologist” as she documents her encounters within Area X. Time and time again, she begins to reminisce on her life before the 12th expedition into Area X. Garland begins “Annihilation” with Lena, the biologist, “in isolation,” confined after the 12th expedition, as she talks to Lomax (Benedict Wong), who wears a full-body hazmat suit throughout the interrogation.

Garland draws from the novel the notion of transition and what ensues, whether it be a sense of forgetfulness, reminiscence, or destructive reactivity. What “happens before” entering the shimmer is set against what Lena “left behind.” In a series of CGI frames, viewers see the at the heart of the shimmer is “the lighthouse” and the mystery of what happened when Lena entered it.

Lena’s background is provided in the film as we see her at John Hopkins University lecturing on cellular activity to a class of students. Garland uses a montage of scenes going back and forth in Lena’s life to map real connections between events. That Lena had forgotten what she’d learned before entering the shimmer leads her to question her prior beliefs, or as she says, echoing VanderMeer’s novel, “If I don’t have real answers it’s because we still don’t know what questions to ask.” This is particularly apparent when a video from the 11th expedition left behind “for those that follow” is viewed by the 12th expedition.

Lena’s husband, Sgt. Kane (Oscar Isaac), who was a member of the 11th expedition, comes back comatose and in critical condition, with the effects of the shimmer on him unclear. Lena’s relation to her husband is also unclear. In the past, before the shimmer, Lena is shown with a certain ambivalence of affection towards him and quite often more interest in her field work. Lena in the present, by contrast, is much more affectionate, open to him, afflicted from what she could have (or could have not) done in the past. Throughout the interrogation by Lamox she makes it clear that she was driven by some respect for her husband.

A key member of the 12th expedition, Dr. Ventress (Jennifer Jason Leigh) is the psychologist, who secludes herself from her team, observing them as they move throughout the landscape of the shimmer. She yearns to know “what is inside” the shimmer. Cass Sheppard (Tuva Novotny) is the surveyor and geologist of the 12th expedition. Anya Thorensen (Gina Rodriguez) is temperamental, distrustful of the biologist and psychologist to the extent of agitation. Each member of the team raises questions. Had Ventress not yearned to know what was inside the lighthouse of the shimmer, had she cared for her team rather than emphatically stressed “going alone,” what would have been different? Thorensen, an addict becoming sober, and a self-mutilator raises questions about what her presence in the shimmer is doing to the environment. Rodriguez performs Thorensen with rugged exactitude; the power and quality of expression in her face being partially in shadow is just enough to conceal yet reveal her emotions.

Josie Radek (Tessa Thompson) provides an important revelation that sets the film apart from the novel on which it is based. Radek more than anyone understands exactly what the shimmer is in essence. Being a physicist from Cambridge, she intuits what makes the shimmer able to change everything in it so that those within it engender its very essence. Lena would later confirm these intuitions under a microscope. Radek’s revelation is portrayed by Garland as a sort of spiritual embrace of the shimmer. At one point, as she sits in the fields, surrounded by the everchanging flora, and speaking with Lena, Radek resembles a religious leader speaking to an outsider.

While Radek may provide a moment of reflection, much of the film sets the way for the mysterious ending. What Lena encounters at the lighthouse remains an open question. Lena can only respond to Lamox’s repeated question of “what happened” with “I don’t know.” She knows that what she’d learned, or what she’d taught her cellular biology students, couldn’t readily apply to what happened. She knows her military training only took her so far until the things in the shimmer resisted such tactics. In the end, she was certain of only one thing, that the shimmer reacted and changed, and whether viewers will feel they have changed after watching “Annihilation” will depend on whether or not they think they can figure out what is at the heart of the film.