The Mental Health of College Students 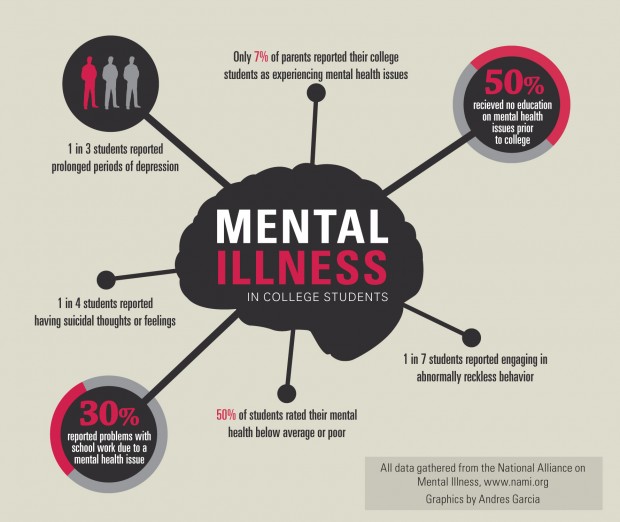 College can be stressful. The amount of work required has evolved over the years to be considered a full-time job. Some students are struggling to keep up with the expectations placed upon them resulting in the state of their mental health deteriorating. Are they receiving the support they need?

In her article “Study Shows Stigma around Mental Health on Campus Correlates with Students not Seeking Treatment,” Jessica Wolf of UCLA reports, “Students were less likely to admit to suicidal thoughts or harming themselves if they attended school in high-stigma environments.” S. Michael Gaddis, a professor at UCLA, tells Wolf, “This indicates that in places where their peers are stigmatizing mental health treatment, students do not want to even acknowledge their mental health struggles.”

Gaddis’s claim is supported by using data from the Healthy Minds Study, an annual online survey conducted by the University of Michigan to examine mental health. “Students were asked whether they reached out for formal treatment — such as taking medication or seeking care from a campus-related medical provider or counseling service in their hometown — or if they sought informal help from a family member, a roommate, a friend, a generic support group, or a religious leader or religious group of some kind.” Gaddis says, “In places where we found higher levels of stigma, students were more likely to report that they do seek informal treatment from a religious group or a religious leader.”

If students are in an environment where they feel scared to express their feelings of anxiety, depression, and in some cases even suicide, it is difficult for them to seek out sources which offer formal treatment. Unfortunately, students who do reach out for support from campus professionals may feel discouraged and do not go back.

Reporters Enrico Gnaulati and Samantha Alibrando of Salon T.V. found that “students with complex problems are being pushed into fast-track crisis intervention instead of in-depth therapy.” One college freshman named Sophie, who received years of professional treatment to help cope with her ongoing anxiety, said, “I was feeling really depressed adjusting to college: the alcohol consumption, relationships, living really close to people for the first time after being an only child who was used to a lot of personal space and privacy—basically, the mess of freshman year.” Sophie continues by sharing her first, and only, experience with her university’s counselor. “Being clear about what I needed felt like I was doing something wrong,” Sophie said. “The counselor knew what she wanted me to be. She wanted me to be a problem she could fix or put a band-aid on. I believe that therapy is a long-term process and the counselor was not interested in that. I only went to one appointment. It felt like I was with a graduate student getting practice doing therapy.” This is not an uncommon story. Sophie is one of many who have actively sought help and left feeling like their issues were not a priority.

In an effort to bring awareness to the mental health of college students, Penn State University created the Center for Collegiate Mental Health (CCMH), an annual report used to collect and analyze data shared by campus counseling services across the nation. In their research they found that “anxiety (#1) and depression (#2) are the most common primary presenting concerns for college students seeking services, as determined by clinicians, clearly eclipsing the prevalence of all other concerns. Moreover, anxiety and depression have shown year-over-year increases in their frequency whereas other concerns are either flat or decreasing.”

The CCMH data shows that during the 2016-2017 school year 161,014 students sought treatment, an increase of 10,531 more students than last year. Since the beginning of this study in the 2010-2011 school year, which reported the number clients as 82,611, the number of students using counseling services has nearly doubled. In addition, the amount of students who have seriously considered attempting suicide has gone up as well.

With the growing rate of students seeking assistance for troubling feelings of anxiety, depression and suicide, colleges across the nation need to focus their attention on ways to raise awareness of mental health issues, and to remove the stigma associated with it. The CCMH only focuses on those who have actively sought formal treatment. There are many out there who are still struggling to find the courage to seek help.

The challenges students face which can be detrimental to their mental health need to be addressed before it becomes too much to bear and they choose to end their pursuit of education, or even worse, their life.

If you are reading this and have thought about seeking counseling before, HFC offers licensed counseling services in the Learning Success Center (A-117). They are open Monday-Friday 8:00am-4:30pm, and can be reached by telephone at (313) 845-9611 or email counseling@hfcc.edu.